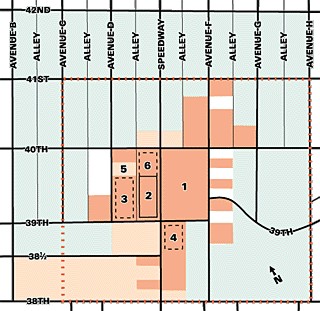 In 1990, the Austin City Council approved the Hyde Park Civic Neighborhood Conservation and Combining District (NCCD), which established guidelines for development on the 15 blocks of land immediately surrounding the Hyde Park Baptist Church property on the two blocks between 39th and 40th streets, and avenues D and F.

Land Owned by the Church (orange)

The main sanctuary and adjacent chapel cover one full block (1), and house the church's worship facilities and Sunday school classrooms. Across Speedway is a five-story, 550-space parking garage (2), and surface lots which cover the rest of the block. Other HPBC-owned land includes several vacant lots and numerous single family homes.

HPBC plans to build two more major buildings adjacent to its current complex on Speedway and West 39th Street: another five-story parking garage (3), which will face out onto Avenue D, behind its current one on the west side of Speedway, and a 40,000-square-foot education building (4) on land currently used for surface parking on the east side of Speedway, south of 39th. The buildings are provided for in the church's NCCD, the only major restriction being a 25-foot setback between the garage and Lyova Rosanoff's property (5) -- which is the only piece of property on the block not owned by HPBC -- plus a height restriction of 30 feet within 50 feet of her property. The church will request permission to vacate the alley between the two garages, currently a public right-of-way which contains utility lines, in order to connect the two garages; if they get it, they will have to set the garage back 10 feet from Avenue D, where one of its exits will be located. The church also plans to extend its existing garage north to 40th Street (6); currently, that land is used for surface parking. They must also get a site plan approved by the city's planning department for the education building.

Hyde Park is also working on a larger neighborhood NCCD (45th to 38th, Guadalupe to Duval), which would contain the church's NCCD but which would probably not change any of its provisions.

Under the terms of its agreement with the Hyde Park Neighborhood Association, and the Hyde Park Civic NCCD, Hyde Park Baptist was restricted from purchasing additional property to the north and east of the church, where many historic houses are located.

The church was permitted to purchase most of the land west and south of its existing complex (light orange), but required to maintain certain property as residential if it did buy it (white). The property the church can purchase includes the Methodist church across 40th from Hyde Park Baptist, along with its parking lot. Although the current expansion project only includes land within the existing NCCD, Hyde Park Baptist's long-term plan calls for expansion westward along the corridor between 39th and 40th streets from Speedway to Guadalupe.