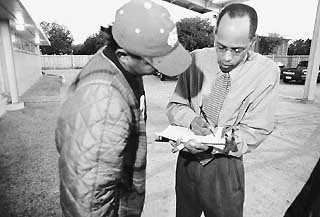 Austin's day laborers, the mostly Hispanic, mostly young men who congregate before 6am each day to seek short-term work, want to know what you think of them. Viewing a visiting reporter as an important link to the community with which they are interdependent, they quickly turn the tables and start asking their own questions: "What do the people in Austin think of us?" asks one. These day laborers understand that appearances matter -- especially after the bruising battle over relocating the site from downtown to North Central Austin -- that took place between the city and a neighborhood that had checked out the day labor scene, and didn't like what it saw. Of course, the way things were at the old day labor site, few would have invited it warmly into their neighborhood. Day labor in Austin had been troubled from the start, due largely to the deleterious mixture of workers and the homeless and transient population that mingled together on the downtown streets. Only about 30 or so men a day were getting work inside the site. Outside, there was chaos. There was crime. And there was the general feeling of menace to the citizenry that the sight of a collection of shabbily dressed men of color walking the city streets often provokes.

But when last spring's Computer Science Corp. deal forced the program off the city-owned land at Cesar Chavez and Lavaca to I-35 and 50th, where it faces the freeway but backs up to a residential neighborhood, the attendant uproar caused city leaders to focus on the program long enough to see that it had to change. And change it has.

If you drive onto the day labor site on a typical morning at peak time, between 6-7am, no clusters of workers will rush your car. Instead, you'll see the site director, Scott Lyles, or the labor organizer, Jose Briseño, as well as workers wearing orange safety vests who have volunteered to help "run the list" -- that is, check the list of workers and match them with employers as they come in. Inside the building where the workers wait for jobs, the atmosphere is that of an early morning senior high school assembly: over 100 young men sit in folding chairs, in varying states of quietude.

Some have whispered conversations with their neighbors, some play checkers, a few watch television. But mostly they are looking toward the front of the big room, waiting. The high school analogy doesn't go much farther, of course: The workers aren't waiting for a report from the headmaster, but for the signal that they have been chosen to go to work. And the biggest difference between high school and day labor is autonomy -- the workers themselves have collaborated to write the set of rules to which they voluntarily subject themselves.

A little over three months into the operation of the new, nonprofit First Workers Corp., the number of workers getting jobs is more than double what it was at the downtown site. Employers say they're pleased with the new, more organized format. The neighborhood protestors who picketed the site in its first days of operation have gone home. Officials of the Austin Police Department, INS, and the city of Austin have all expressed pleasant surprise at the way the program is going.

Lynn Svensson, the consultant who has presided over a string of day-labor overhauls in California, and whom the city hired to help remake day labor in Austin, is not surprised by the reaction. "This is the thing about this program," she says. "You come into the town and everybody hates the day laborers. Everybody hated them everywhere I went." After the change, Svensson says, "everybody loves them. It happens everywhere."

This is what everyone hoped, but many doubted, would happen when the day labor site moved from its downtown home. Why the turnaround? Mostly everybody agrees there are two main reasons: First, the program moved away from the Austin Resource Center for the Homeless, thus isolating the challenges of day labor from the often more complicated ones faced by Austin's homeless population. And second, the program is now run by the workers themselves. According to the model instituted by Svensson, anything that happens at the center is a result of consensus on the part of the workers. More than just a majority vote, consensus is the agreement of "everybody except for one or two people," according to Svensson. Such consensus is reached through meetings with all the workers, which are usually held at the beginning of the day, before most men have left for their jobs.

Workers participate in the administration of the site, helping run the all-important "list" that contains the order of names for the day, and decides who goes out to work when. They also patrol the neighborhood in crossing guard-orange safety vests to make sure nobody is loitering about in the neighborhood or -- horror of horrors -- soliciting work outside the day labor site. It was such a consensus process that led to the creation of all the center's policies and rules, of which the most important are: These men wait for employers to come to First Workers Corp., the new city day labor site. The site generally receives about 120 workers per day, the vast majority of whom receive jobs. (Photo By Jana Birchum)