The City of Austin Throws the Party of the Century 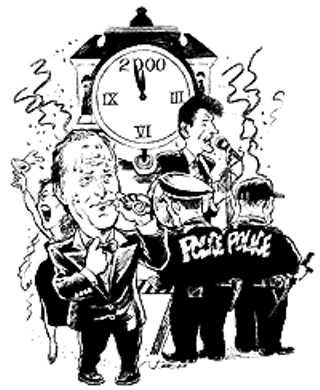 In the race for the Worst Pre-Millennial Job Title in Austin, Kirk Watson and John Segrest seem headed for a photo finish. Together, they are the faces of Austin's pre-millennial tension. The city's officially sanctioned New Year's Eve celebration -- a downtown convergence regrettably dubbed A2K -- is Watson's brainchild. The charge of ensuring that it is the safe, fun, and well-coordinated event the mayor envisions falls to Segrest, the A2K event coordinator. On Dec. 31, both men will join what's expected to be a crowd of nearly 200,000 on Congress Avenue. And both admit they'll be there with their fingers crossed, sweating, even if the temperature dips into the 30s. Since the city began forming an A2K exploratory committee last March, the event has represented the city of Austin's largest logistical challenge to date. Never has the city planned an event for this many of its citizens. Never before has the city closed off downtown, all the way from Lavaca to I-35, and from Second to 11th. And few have attempted to raise more than a half-million dollars in sponsorships for a one-day event.

But of course, the unknown, uncharted, and highly volatile factor that most adds to an already anticipation- and frustration-filled event is the event's namesake, Y2K. As if the safety, accessibility, and winter storm concerns attached to inviting 200,000 people to a free event weren't troublesome enough, Y2K ushers in the dual fears of a global computer meltdown and domestic terrorism.

Already, the city's A2K contingency plans have their own set of contingency plans. And while A2K has inspired an unprecedented level of communication and cooperation between Austin's police, emergency, fire, transportation, solid waste disposal, and energy leaders, not one city official, nor Watson and Segrest, can unconditionally guarantee the city's preparedness or the event's ultimate safety. In fact, the only thing the city can count on, says Watson, is that a large chunk of Austin will be headed downtown to celebrate New Year's, A2K or not.

"Given that on Halloween and New Year's there already are in excess of 100,000 people downtown, our idea was to get ahead of the curve and plan an event that doesn't leave a whole lot of people downtown without organization," Watson says. "The goal is to provide for greater public safety by being organized on the front end for a night people were coming downtown for anyway."

It's Watson's contention that all he has commissioned are "a few stages, a name, and a logo." And although Austin already has an annual New Year's event sponsored by the East Sixth Street Community Association (ESSCA) that draws nearly 100,000 people annually for a star-raise (a reverse ball-drop), Watson and Segrest say their event is designed to distract, disperse, and ultimately entertain a crowd potentially twice the average size.

The debate over whether A2K is instead an opportunity for the city to cash in on Sixth Street's entertainment market, as ESSCA leaders contend, has already become the event's hottest political issue, and it has in turn spawned a few other relevant questions: