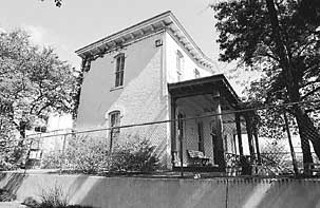 Austin's crumbling downtown historic district may lose another landmark next month, when City Council debates the fate of the Castleman-Bull House, built at the corner of San Jacinto and East Seventh more than 125 years ago. The house, located at 308 East Bois D'Arc (now Seventh), was purchased by neighboring St. David's Episcopal Church from the Castleman-Bull family in 1963. Five years later, the church began leasing space in the building (known to parishioners as Fontaine House) to Caritas, a multidenominational organization that provides services to immigrants and the poor. Now that Caritas plans to move its operations to Neches Street, St. David's spokesman Dale Chrisman says the church wants to expand to make room for its congregation, currently 2,400 members and growing.

As part of the expansion, St. David's plans to build a multi-level social services building where the house stands, a move that would require demolition or removal of the home. Chrisman said church architects deemed incorporating the house into the expansion plan unfeasible because "the house is just not conducive to adding onto or including in a larger facility."

Historic preservationists who oppose displacing the house were vindicated last month when the city's Historic Landmark Commission voted unanimously to grant the house historic zoning, a designation which would require that any changes to the building be approved by the commission and the City Council.

"It's in an area that was once a thriving historic neighborhood, and it's the only house that's left. If this doesn't qualify for historic preservation, I don't know what does," said Barbara Stocklin, the city's historic preservation officer. Stocklin added that the commission does not usually force historic zoning on owners unless a building is threatened, "which it is, in this case. Most people view [historic zoning] as a source of pride. It's been very clear that [St. David's] hasn't wanted it zoned."

But Chrisman said that the attention the zoning has been given in the press caught St. David's off guard because "the house has been there a long time and no one has ever mentioned zoning it historic. These roadblocks have all been thrown up suddenly." He said the church has never intended to tear down the house, only to move it to another location to make room for the expansion project, which has been in the works for two years. Estimates for relocation costs (which Chrisman said St. David's would be willing to partially or fully cover) range from $150,000 to $200,000.

Gregory Free, president of the Austin Heritage Society, said his group has been working with the church and area preservationists to find a practical solution. He said St. David's has been open to input from preservationists, adding that he believes the church has been responsible in its approach to expansion. "A lot of people would've done what's been done in the past, which is tear it down in the night. [The people at St. David's] are good people ... and good neighbors to the downtown community." Free said that once the building is moved, the church and the Heritage Society plan to make sure it remains open to the public as an example of classic early-Austin architecture.

But despite claims by church spokespersons that St. David's wants to save the house, some advocates believe moving it may damage the structure, as well as the neighborhood. Herschel Moore, a retired attorney who grew up in the home, said these efforts by St. David's are just another example of a growing disrespect for downtown's historic qualities. "I'm tired of seeing people tear down everything that's historical when so many communities are trying to restore them. To me, the downtown district is totally demolished. I will admit, it will greatly deter St. David's progress. However, I will fight to keep it historical."