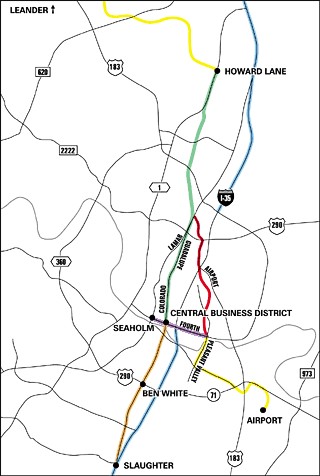 After Phase 1 -- the Red/Green light rail line from Howard Lane to downtown, and the South Congress BRT from Slaughter Lane to downtown -- Capital Metro says its phasing strategy for rail is not set in stone.

The Inner Orange Line: Phase 2A -- also described as Phase 1B -- is a Fourth Street crosstown connector through the East Austin rail corridor to Pleasant Valley Road, and potentially west (not shown on current maps) to a commuter rail station at Seaholm. This short segment would be completed within months of the first phase.

After that, Cap Met could either extend the Red Line north from Howard Lane to Leander, or extend the Orange Line out to Bergstrom, depending on the public mood.

The Inner Red Line -- the loop through East Austin and past Mueller Airport -- would come last. The full system would be complete by 2016 or 2017, depending on the order.