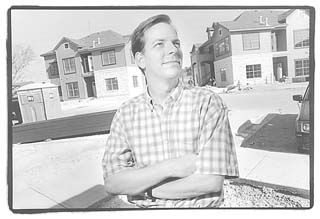 A high-pressure ridge over Austin kept the rain away all summer, but politics at the Texas Department of Housing and Community Affairs (TDHCA) may have caused this year's affordable housing drought. In July, the TDHCA board approved only one low-income housing tax credit development in Austin, despite the city's status as the most expensive rental market in the state. Could it be a coincidence that Austin developers affiliated with consultant Don Hammond, who last year reported to the governor numerous irregularities in the tax-credit selection process, were totally shut out this year? And why was a nonprofit developer with an ambitious project supported heavily by the community passed over for a project in Georgetown -- where rents are nowhere near as burdensome as Austin's -- proposed by an out-of-state organization with ties to former TDHCA director Larry Paul Manley?

Austin's working poor could have looked forward to a 160-unit complex on 28 wooded acres in Oak Hill, the first affordable development ever proposed west of MoPac, and one designed to change the image of low income rental housing. The nonprofit which proposed it, the Central Texas Mutual Housing Association (CTMHA), owns about 1,200 low-income apartments and enjoys a friendly relationship with neighborhoods and city officials. CTMHA's plan, which the nonprofit says generated 250 letters of support from local residents and officials (the Gerogetown development received five), called for a low-density layout of high-ceilinged fourplexes designed to look like homes. Woods and walking trails ring the site. A learning center was to include a PC lab and a full-time staff conducting after-school activities, plus literacy and ESL courses for adults. Two-bedroom apartments would have rented for half the going rate in Oak Hill. CTMHA won tax credits to build a very similar complex on Slaughter last year, but this one ran into trouble. Why?

According to staff at the housing agency, Tax Credit Manager Cherno Njie personally inspected CTMHA's site and didn't like it because it didn't directly front a major thoroughfare and wasn't visible enough. ("You can see it clearly from Highway 71!" fumes CTMHA's executive director, Walter Moreau.)

So what did Austin get instead?

A project on East William Cannon, near the city's poorest schools, whose development partners include Monday Esiere, a developer who has been awarded four tax-credit projects in three years and has yet to complete a single one. His partner, David Leonard, has no tax-credit housing experience. The application for the William Cannon project, which TDHCA staff set aside for more than a month before approving it in the final week, is covered with penciled notations where TDHCA staff tried to make sense of the financial projections, finally noting that: "Applicant's overall lack of prior development experience is evidenced by the many inconsistencies throughout this application -- "

Like CTMHA's complex, Spring Valley Townhomes offers an activity center and after-school services -- but taught by volunteer staff coordinated through the University of North Texas, at less than a third of the cost of paid staff. An Esiere development under construction off Oltorf east of I-35 has boxy, vinyl-sided buildings fronted by uncovered stairwells and scant greenspace -- a sadly stereotypical affordable housing complex.

CTMHA's application was approved by staff with far fewer reservations than those attached to Esiere's, the most prominent being a question about the cost of building on CTMHA's Southwest Austin site. But more serious concerns were raised about the site of the project approved in Georgetown. Perhaps that project's consultant, Dan Markson, who was reportedly shown around the LIHTC division offices by former TDHCA director Manley, convincingly argued those sticking points away. Maybe a note from lobbyist Joe Bishop, addressing LIHTC associate underwriter Jason Bullmore by his first name, also helped. "There's no way they can argue that site is better than ours," says Moreau. "Ours is a blatant case where they ignored community support in favor of a bogus nonprofit deal from Miami Beach." (Affordable Housing Solutions for Florida, which is teaming with a for-profit entity to build the Georgetown project, replies that it has a solid record in affordable housing.)

The Austin area has been the site of questionable tax-credit projects in years past. Henna Townhomes in Round Rock received tax credits in 1997 and is still not finished. Developer John Paul claims that it's not entirely his fault that the Townhomes -- as featureless as Monopoly houses and stacked together in long rows like prison barracks -- have no lawns or other open space. The city of Round Rock, Paul says, forced him to pave the entire complex for parking. But a developer who proposed a competing development in Round Rock that year says city officials told him they preferred his project over Paul's in the first place.

Across Louis Henna Boulevard from Paul's property is an affordable complex called Meadow Ridge, awarded to developer Bob Bobinchuck exactly one year after Paul received his credits. It is already up, and full, and compared to Henna Townhomes is a virtual plantation, with spacious grounds, a clubhouse, and a basketball court. True, Meadow Ridge reserves only about half of its apartments for lower-income individuals, whereas Henna Townhomes is 100% affordable. But Meadow Ridge was subsidized by TDHCA-approved bonds, which are far less lucrative for a builder than tax credits.

Bobinchuck says affordable housing is what he likes to build, but he's tired of playing TDHCA's political games and is about to quit the business. "It's getting old, I'm concerned about the equity in this thing, but, well, I promised I wouldn't get my blood pressure up about it this year," says Bobinchuck.

But Moreau, whose nonprofit organization provides a range of services to its residents, including a program that matches dollar-for-dollar the savings residents set aside for home ownership, laments that the primary victims of TDHCA's politics aren't developers. "I get upset because this hurts families," says Moreau. "Those with the greatest need are denied the opportunity to live in the best quality housing, in the best location."