Run Out on a Rail 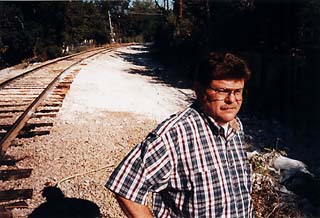 Two years ago, the Federal Railroad Administration warned the Capital Metropolitan Transportation Authority that it could face up to $63 million in fines because many of its railway-road crossings were unsafe. Since that time, Capital Metro says that it has spent $2.3 million upgrading its railroad crossings. But a poorly maintained crossing owned by Cap Metro may have contributed to the derailment of a rail car in East Austin on September 7.

On that day, a rail car loaded with 130 tons of lime careened across Cherrywood near 38th Street. Donald Cheatham, the owner of Longhorn Railway Company, which hauls freight on the city-owned rail line, blames the derailment on the poorly maintained crossing. Cheatham says the accident cannot be blamed on speed -- he says his crew was driving the train at 10 miles per hour -- nor can it be blamed on the rail car. "It wasn't faulty equipment," he says. Wheel marks on the asphalt in the middle of the rail crossing show that the car jumped the track near the middle of the street, which had recently been resurfaced.

Karen Rae, Capital Metro's general manager, says the condition of the rail crossing "may have played a factor" in the derailment. But, she adds, "I don't believe it's the core reason." Rae says that questions remain about the wheels on the rail car and about the weight of the load the car was carrying.

Whatever the cause of the derailment, the accident has put a spotlight on Capital Metro's safety record. It is also the latest skirmish in an increasingly bitter relationship between Longhorn and Cap Metro. In July, Cheatham sued the city of Austin and Council Member Daryl Slusher, claiming that the city has interfered with Cheatham's business. The lawsuit, which seeks $1 million in exemplary damages from each of the defendants and $15 million in actual damages from the defendants as a group, claims that Slusher, who sits on the Capital Metro board, and the city have interfered with Longhorn's rail business and worked "to injure the Plaintiff's business operations, revenues, and business reputation."

The lawsuit and the derailment are problematic for Cap Metro because it wants to use part of the rail line for its much-discussed light rail passenger system. If light rail becomes a reality -- officials with Capital Metro are reportedly aiming for a referendum some time next May -- Longhorn would operate freight service in the middle of the night, probably between midnight and 5am.

That is, if Longhorn stays in business. The railway has been struggling to survive in recent months. Cheatham attributes much of the slowdown in his business to the near-monopoly that Union Pacific, the nation's largest railroad, has on the Texas market.

The derailment is the latest in a long series of blows to Cheatham's business. And he believes it never should have happened. Cheatham says Capital Metro didn't give him a copy of the October 31, 1997, letter from the Federal Railroad Administration until earlier this month, even though the letter says that any civil penalties levied by the agency could be assessed against his business. The threatened fines, says Cheatham, and the fact that Cap Metro has deferred millions of dollars' worth of rail maintenance, shows that the agency "doesn't care about public safety."

Rae says the FRA letter was a draft letter that was "never officially sent" to Cap Metro. But she says her agency took action and that it has spent more than $2 million on rail safety since it got the 1997 letter. Additional safety projects worth $2.7 million are planned. But Rae admits the agency is "doing catch-up on deferred maintenance." The derailment, she says, is "another signal that we need to keep improving the [rail] line."

Federal authorities say they are pleased with Capital Metro's actions. Greg Likness, the rail safety specialist with the FRA who wrote the 1997 letter, told the Chronicle that Cap Metro has "made substantial improvement in a lot of the crossings we looked at before. I've made two inspections since that time, and I've seen a lot of progress."

Robert Bolduc, Cap Metro's rail manager, who came on the job in early August, provides one of the few calm voices in the ongoing fight between the two sides. During a tour of the Cherrywood derailment site last week, Bolduc said there is no doubt that the crossings should be fixed "expeditiously." But, he added, "is the railroad safe? Yes." Since the derailment, Cheatham has ordered his crews to slow their trains to five miles per hour on rail crossings in the city. And while that may ensure safety, it's certain that the unhappy relationship between Longhorn and Capital Metro won't be healed any time soon.