Texan, Our Texan: The Daily Texan Celebrates 100 Years of Tradition and Transformation 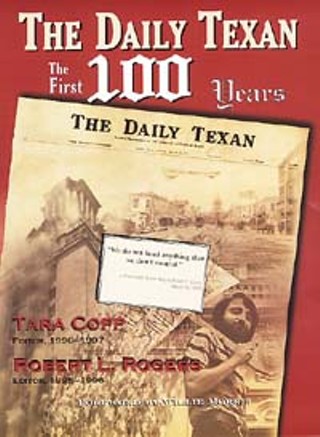 Rob Rogers will do just about anything to read a good book. If necessary, he may even write it himself. Rogers, a 25-year-old attorney in Washington, D.C., and alumnus of the University of Texas, was the editor of The Daily Texan during the 1995-96 school year. As such, he knew he was the latest carrier of a torch with nearly a century of history behind it -- a history which he wanted to learn. Unfortunately, he says, that meant that he "wanted to read a book that had never been written.

"I had heard stories about [late, famed, former editor] Willie Morris and the blank spaces that had been run when stories had been withheld by the UT administration, and I looked for a history of the paper at the library," Rogers says. "There really wasn't anything. Eventually, I decided it would be an interesting story, and I needed a Plan II [liberal arts honors] thesis."

Rogers mentioned the idea to Tara Copp, who succeeded him as Texan editor. Copp, now 25, liked the idea and needed a Plan II thesis of her own, so the two agreed to work on the project together. This week, their work became more than a thesis -- Austin's Eakin Press published the final product as The Daily Texan: The First 100 Years, the most complete history to date of one of the nation's premier student newspapers.

"After five years," Rogers says, "It is the most trouble I've ever gone to to read a book."

It was a lot of trouble for both Rogers and Copp, albeit in different ways. Because covering 100 years of history can be such a monumental task, the two divided the chore down the middle -- Rogers took the first 50 years, Copp the latter 50. For Rogers, the work was mainly a paper trail, as there are few pre-1950 staffers still alive, and none at all from the very earliest years. So what could Rogers do? Just sit down and start reading every issue of The Daily Texan?

"That was part of it," he says. "I did most of it from microfiche at the Barker History Center [on the UT campus] because I didn't want to damage the original sources. After that, I tried the notes of the TSP [Texas Student Publications, which publishes the Texan] board meetings. The juiciest stuff came from the UT archives: letters from the regents, the president's office papers, [former UT president] T.S. Painter's letters."

Copp, who served as press secretary for Austin congressman Lloyd Doggett and is now a business reporter at the Corpus Christi Caller-Times, had the friendlier task of hunting down interviews with the people who built the Texan's reputation, some of whom became important historical figures. Copp could have approached these storied figures as colleagues, but instead, she says, "I was in total awe. I was nervous each time I picked up the phone, and I was amazed by the responsiveness and friendliness that I got every time the voice came on the line. -- I got a little scared on the line with some of them. I wondered if I measured up. You want the Texan to stay as strong as it was in the past."

What Rogers and Copp produced is a tale that is fascinating on a number of levels, and a book that serves a variety of purposes.

For others, it serves as a general history book, examining how students covered the issues of their day and charting the Texan's course from a parochial paper which restricted itself to campus events to a full-service publication covering state politics and national and world news.

Most importantly, The First 100 Years records one of the great First Amendment fights in our nation's history -- the struggle for the student press to have a voice of its own, independent of university administration. Some of the major victories in this fight have been won in the Texan offices. From the get-go, the UT administration tried, successfully, to keep the Texan under its thumb: The First Amendment, the book notes, was considered strictly federal in nature and wouldn't apply to the states until 1931. As early as 1908, editor William A. Philpott, in his last editorial, complained that he was "cramped" in his expression of opinion by the administration. Worried that the Texan might get its funding slashed, Philpott said he avoided controversy; "The result," he wrote, "has been rehashed editorials on timely topics of the "we need a gym,' "college spirit' caliber."

This theme was constant: UT would hire censors to suppress stories through the years, and staffers (most notably Morris in 1955-56) fought back by running blank space with the headline "This editorial withheld" or replacing the offending opinions with columns such as "Don't Walk on the Grass (A Model Editorial)." In the 1970s, the notoriously authoritarian UT System Regent Frank C. Erwin tried to crack down on the Texan by proclaiming, "We do not fund anything that we don't control." In the 1980s, editor Mark McKinnon (now a member of the Bush campaign) went to jail for refusing to hand over photographs of Iranian student protesters to the UT police. As recently as Copp's tenure, there were still struggles to change the editorship from one elected by the student body to one appointed by TSP.

Did learning the history behind their jobs change their perceptions of the editorship?

"Absolutely, in several ways," Rogers says. "You get a sense of who came before you, and you have the added responsibility of knowing that you're not just doing a job, but you're also defending and passing along a tradition."

Copp, on the other hand, says she was already aware of the history because "I was on the Texan staff from the start, and I had a long-running friendship with Ron Gibson." (Gibson, the Texan's editorial manager, recently retired after 12 years in the position.)

"He always had a story of the past," Copp says, "so I had a sense of the importance of the past before I took the editor's job. -- I think Ron was one of the people primarily responsible for me loving the paper so much, because he put the jobs we were doing in perspective."

Another such person was Morris. The native Mississippian was best known for his autobiography North Toward Home, in which he chronicled his evolution from small-town boy to famed editor of the Texan, The Texas Observer, and Harper's magazine. Morris wrote the forward to The First 100 Years in May, just three months before he died at 67.

"He was my hero," Copp says. "It was the hardest blow when he died just before the book went into print. That was the main reason we wrote the book -- Rob and I -- felt the main purpose was to capture some of these stories in print before the people who made them were gone, and then he died."

(Another Texan staffer who never got to see his story in print was Michael Eakin, editor from 1973-74, whose 1979 murder has never been solved. His family owns Eakin Press.)

While The First 100 Years might be a bit cursory for some -- at only 134 pages, it is, as Rogers admits, "not something that would give a university professor tenure" -- it is, nonetheless, an important primer on lessons that were hard-won. The Texan today enjoys a degree of editorial freedom that is remarkable for a student paper, but that freedom could evaporate with a change in the political winds.

"I think they've relaxed," says Copp of the tensions between the Tower and the Texan, "but they're not over. We as a university and a nation tend to sway one direction or another, and we need to keep an eagle-eye watch on the direction we're going. Even the subtlest changes in the language of the TSP charter could have far-ranging effects on the long term."

The Daily Texan will celebrate its 100th year of publishing with ceremonies and symposia Sept. 30-Oct. 2 under the theme "Journalism and Democracy: Will the Marriage Last?" The ceremonies will feature such noted Texan alumni as Walter Cronkite, Bill Moyers, Lady Bird Johnson, and Ronnie Dugger. Copp and Rogers will make an address on Friday, Oct. 1, at 9:30am. There will also be a book signing by Copp and Rogers at the Barnes & Noble on Guadalupe at 10am Saturday, Oct. 2. For more details on the various events see this week's "Community Listings," p.136. (Lee Nichols worked at the Texan 1987-90.)

If they had waited much longer, they would have broken their promise to arrive "this summer," but News8 is finally here -- on Sept. 13, subscribers to Time Warner Cable began seeing the first broadcasts from that company's new 24-hour local news channel.

Offered as a "public service" to local viewers -- and an incentive to bring nonsubscribers into the Time Warner fold -- the new station closely resembles another Time Warner property, CNN's Headline News, with an hour-long "news wheel" that is gradually updated throughout the day. Unlike Headline News, however, the focus is almost strictly on Austin.

The study was careful to point out, however, that this doesn't hold true for every such cable channel, attacking "The Times" on WAMI in Miami, "which unabashedly airs celebrity items, entertainment features, and soft news and makes no effort to report on the hard news of the day." (The complete RMMW report is available at http://www.bigmedia.org.)

"Media Clips" will hold off on offering any critiques of News8 for a few weeks and allow the station to work out its technical and professional kinks.