A Night at the Rio

Sometimes a War Zone Is More Like a Snore Zone 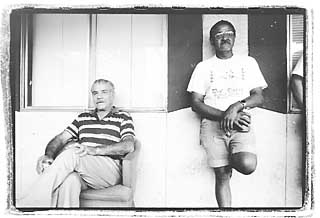 "Yeah, we live here," the silver-haired guy (left) replied. He told me that the Rio was home for nine years, but when I asked about the possibility of it closing, he clammed up. "Do I look like an information desk?" he asked. I danced around the question, but he parried with the same question. "I said, do I look like an information desk?" I turned to the other guy (right) for help, but silver hair jumped in. "He doesn't speak English, so don't talk to him." (Photo By Bruce Dye)

A tall, thick palm tree sprouted from the black concrete and its leaves bounced up and down in the hot night wind. I leaned over the balcony railing on the second floor of the Rio Motel, the most infamous night spot in Austin, and tried to decide if I was scared or not. After all, this was the spot the police declared a nuisance, and not because it was like the neighborhood cat that pees on your shoes when you leave them on the doorstep. "Nuisance" was a legal term, and I was more inclined to declare this place a funky, down, boomin' war zone of crack heads, whores, and people with bad teeth.

This was the place against which the state's attorney general -- the guy with the hair that's just too white -- filed a lawsuit, because its guests menaced the local neighborhoods, burglarizing homes and leaving six-pack rings in yards. This was the place where murder suspects were arrested, where crack rings were foiled, and where crabs sought refuge in polyester comforters.

I thought back to my college days at UT, when I went to the Rio Motel one night to research a story I was working on about "drug havens." I brought along a couple of roommates, both of whom insisted that we leave the parking lot when a guy with a rifle walked by and yelled "bitch" at some woman standing in a doorway. (It was just a hunting rifle.)

Amenities at the Rio Motel include a drawerless chest of drawers... (Photo By Bruce Dye)

But that was the late Eighties. Times had changed, I guessed, since the only thing menacing about the night at that point was the overwhelming stench of Lysol wafting from my room. I had been assigned Room 207 by the kind woman behind the motel desk. My first disappointment came with word from the woman that the Rio Club, the motel bar, had been closed down. But I didn't let that deter me from my work.

I didn't mention I was a reporter, but I didn't lie about anything, either. She gave me a discount for being alone, which was cool, because I just couldn't see paying more than the 35 bucks or so I shelled out. After all, the bed was so low to the ground you wouldn't notice rolling off. Other amenities were lacking.

Aside from the lamp with no shade, a lone desk and TV were the only other furnishings. I went to the bathroom with trepidation, but found that it was actually pretty clean. In fact, someone had put those little sticky, rubber feet in the tub to keep you from slipping. And they were mold-free! Adding to the niceties were the little soaps stacked neatly on clean white towels.

Every once in a while the toilet came on. There must have been a leak from the flapper not sealing properly. Didn't the management realize how much water this wastes?

I began to realize that my biggest fear could be boredom. What if nothing funky, down, and boomin' happened? What if the war zone was a snore zone?

But there were more pressing problems, such as how to turn on the TV for the free HBO. Penciled next to the light switch was, "Turn TV on from wall." Since I couldn't reach the TV from where the wall was, I assumed that the light switch turned it on. CLICK. The lamp with no shade came to life and burned a spot into my retina. The TV, however, remained off. Upon closer examination, I found that the On/Off knob was torn off, and the rod was pushed in beyond the reach of my stubby fingers.

Here's where that theory of coincidental purpose my wife always espouses came to new light. It's the theory that every slight thought of purpose or intuition should be acted upon vehemently. While preparing for the night at the Rio, I filled my backpack with reading material, two 16-ounce Lone Stars, pens, paper, and this little tool that has a screwdriver, a can opener, mini pliers, and a few other few other things I never have figured out. Don't know why I took the thing, just thought somehow I might need it.

So imagine my elation when I pulled out the mini pliers, yanked out the On/Off rod, and brought my new companion to life. Had I not brought the seven-in-one tool, I wouldn't have seen the "9999" countdown to the MTV Music Awards on Sept. 9, 1999. I'm still waiting for the meaning of the "9999" thing to reveal itself. It's all connected, you see.

Then I realized that the air conditioner -- a wall unit with no cover -- wasn't on. Once again, instructions were penciled on the unit, but the source of the problem was obvious -- it was unplugged. Plugging it in produced a few sparks, but it worked.

Next I stared at the long wall behind the bed and thought it would look much nicer with a large blue-green tint painting with a ship at sea. As the minutes ticked away without action, I decided I had to get out. I walked through the motel court looking for signs of life, or impending death. 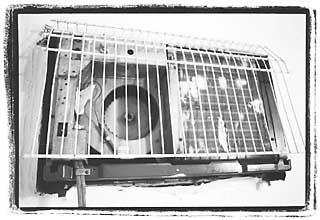 I encountered a man with silver hair slicked back and a muscle shirt exposing several tattoos on each arm. He held a beer can with both hands and sneered when I offered a friendly salutation.

Another younger man with paint on his hands sat at his side and let his lip drop at my question.

"Yeah, we live here," the silver-haired guy replied. He told me that the Rio was home for nine years, but when I asked about the possibility of it closing, he clammed up. "Do I look like an information desk?" he asked. I danced around the question, but he parried with the same question. "I said, do I look like an information desk?" I turned to the lip dropper for help, but silver hair jumped in. "He doesn't speak English, so don't talk to him."

About midnight the cops showed up. They pulled in, sat in a parking space for 22 minutes, then squealed their tires and left.

Shortly after, a guy with a dragging leg scraped through the parking lot. He made a ruckus with the one foot, and I wondered how people like that feel about one shoe giving out so much faster than the other. I watched him carefully through the crack of my door and hoped he would go to some room to score some dope. Nothing would have pleased me more than to witness a motley foot scraper use his disability check to blow his mind for 39 minutes on a piece of rock. But he just went on scraping across the near-empty lot.

The palm tree still bounced with the wind. The only activity that looked decidedly illegal, however, was the window tint on several of the cars -- a few shades too dark.

A jeep with a thundering muffler pulled into the motel, and out jumped two white guys with no shirts and a white girl with a shirt. After checking out their room, they came back out to the jeep to listen to ZZ Top on the stereo.

I decided to join them and share cheap beer. It turns out they were Okies down for the weekend to swim naked at Hippie Hollow.

"This place is a rip-off," said one of the guys with no shirt. "Forty bucks -- we walk in the room and two roaches crawl up the lamp."

Apparently, however, all the motels up and down I-35 were full, and the Rio was the only choice left for them.

The girl walked an imaginary line with her bare feet as some sort of personal sobriety test while I went ahead and let the two guys in on what I was doing at the Rio.

"Shit," said one of them. (They were brothers and pretty much indistinguishable, and they didn't want their names in the newspaper.) "We could use some drugs!"

Then I let him in on the whole police investigation/attorney general/lawsuit thing. "Shit, we better get back to the room."

I retired as well. Still acting like a peeping Tom, I continued to survey the parking lot for action. A woman in a short skirt arrived at a room across the court with a guy wearing a cowboy hat. They left, but she returned about 43 minutes later with a different guy in a cowboy hat. She must like cowboys. Several other people's only crime was looking real suspicious. 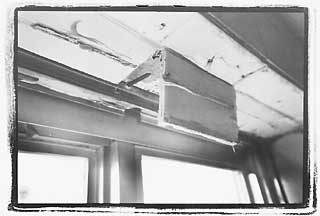 The next day I walked through the motel lot and kicked at the garbage as the building's hot pink stucco flared into my damaged retina. I stared at the crumbling sign with hand-painted letters finishing off the missing "OTEL."

A shopping cart stood by a garbage bag that had tumbled down a flight of stairs. One room used tin foil for window shades.

I wondered if it was really possible to clean up the Rio, to get rid of the crime. I noticed a sign stenciled on the side of one building: