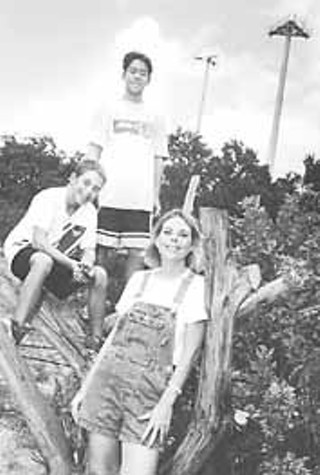 In January of 1997, Beth DeVictoria didn't give a second thought to the cellular tower being constructed on neighbor Hans Derocher's property behind her house on Old Bee Caves Road. She had no idea what the tower would be used for, but since it didn't obstruct her view, she figured live and let live. Then, during the summer of 1998, after returning from a vacation in New Mexico, she came home to find yet another tower being erected next door. This new tower did obstruct her view and stood much taller than the other one. And this new tower loomed over her back yard. She came unglued. "I lost it," DeVictoria recalls. "I drove up to Hans' driveway and yelled at the workers who were working on the tower. I demanded to see the landowner." For the next several days, a yelling match ensued between Derocher and DeVictoria, while the air between the two properties grew thick and ugly. "I got in trouble with [my] husband for yelling obscenities in front of the children," DeVictoria admits.

Thus began DeVictoria's unlikely journey into political activism. For the past year, she's written letters to Austin City Council members and state representatives. She's become well versed in the city's Telecommunications Tower Ordinance and has pushed for stronger revisions to the local regulations, which the City Council is expected to consider later this month. Moreover, DeVictoria has attended city Telecommunications Commission meetings, met with city staff, and made numerous telephone calls to Sprint and Nextel, the cellular companies using the towers. At first, she only objected to the aesthetic ruin of her once-rural property. The more she learned about cellular towers, the more she feared her property values might decline. Then something else started to trouble her: Were these towers dangerous?

Derocher, who lives on the same property where he leases out the two cellular towers, disputes DeVictoria's complaints that the towers decrease property values; nor does he believe that the towers' electromagnetic radiation poses health hazards. He says the conflict stems from old wounds inflicted when he bought an adjacent property the DeVictorias had their eyes on. "I'm within the guidelines of the city ordinance," Derocher says, and points out that the Sprint tower was lowered from 120 feet to 100 feet as required by city ordinance. "It's amazing that someone who isn't concerned about a 52-acre trailer park going in down the street is concerned with two cellular towers. I thought I was doing the community a favor by providing a place to put them. Everyone I know uses a cellular telephone, but they aren't going to work without the towers." Besides doing the community a favor, of course, Derocher also earns rent from the two towers. The going rate is $500 to $750 per tower per month.

Plans for a second trailer park on Old Bee Caves Road don't bother DeVictoria, since she believes it poses much less of a threat to her property value than the towers. Unable to afford a $3,000-$5,000 real estate appraisal of her home, she asked local real estate broker John Rosshirt to give her an eyeball estimate of the market value with and without the towers next door. Rosshirt estimates that the property would have been worth $180,000 before the towers, and is worth about $120,000 now.

DeVictoria admits she wouldn't be concerned about changing the cellular tower ordinance if the towers hadn't appeared next door. "Everyone lives with the not-in-my-back-yard attitude, but they're in my back yard. If one of these towers went up in Cat Mountain, you'd hear a big hullabaloo. If this were a more affluent part of Austin, I think the city would be more attentive. But since I live on trailer-park row, they're ignoring me -- although they now know who I am."

Across the country, movements for more local regulation and control over cellular tower sites have grown in strength and numbers, and the Internet is awash in Web pages covering the issue. One Web site called "The Cellular Slayer" chronicles the efforts of a city attorney who led a fight for a six-month moratorium on city cellular permits in Medina, Washington, and successfully fought off a half-dozen lawsuits from Sprint.

In Virginia Beach, Virginia, a local citizens' group won a federal appeal, reversing a lower court order to approve telecommunications towers in a residential area. Bill Evans of the Cornell Lab of Ornithology organized a conference to expose the increased killing of birds caused by the proliferation of cellular towers. Evans says that more than 5,000 birds died from collisions with a 420-foot communications tower in Kansas one January night this year during a snowstorm.

In New York City, an organization called the EMR Alliance (DeVictoria is a member) is trying to galvanize a nationwide effort for local governmental control over cellular tower sites, as well as provide public awareness of the harmful effects of electromagnetic radiation (EMR). Concerned citizens in Vermont, California, and Florida have successfully delayed cellular permits or created a moratorium against them.

While opposition to the cell towers is gaining momentum elsewhere, Austin has been slower to respond. Only a handful of people, working individually, have persistently voiced major concerns about the local cellular tower ordinance.

Keith Hoaglund -- a planner who handles citizen inquiries, permits, and approval of small projects in the city's Development Review and Inspections Department -- estimates that some 166 cellular towers stand within the Austin jurisdiction (which includes parts of Hays and Williamson counties). Of those 166 towers, only four have been the focus of citizen concerns -- the two on Derocher's property in Oak Hill, one on Adelphi and Amherst near Parmer Lane in Northwest Austin, and one in South Austin in the 300 block of West Johanna Street. To the best of Hoaglund's recollection, only 16 people have called in complaints about the towers.

Why is environmentally sensitive Austin so quiet on this issue while other communities are so vocal?

Real estate appraiser Justin Travis thinks it comes down to one factor: It's the real estate market, stupid. Travis says it doesn't much matter whether your property sits next to a cellular tower or not, because, more often than not, the market value of any Austin home has risen over the past five years.

City telecommunications policy planner Jack Kirfman credits the lack of cellular tower complaints to the city's creation of an ordinance two years before the enactment of the Telecommunications Act of 1996, the federal legislation that opened up the market to free competition. By implementing regulations early on, Kirfman says, Austin has avoided some of the headaches other cities are experiencing. San Antonio, for example, had to scramble to get an ordinance in place last year. The Austin ordinance, though in need of revisions, currently stipulates where the towers can and cannot locate, and provides for setbacks from single-family residences.

Prior to 1996, Austin operated under a duopoly consisting of Nextel and Cellular One, as opposed to the six companies scrambling for a piece of the local market now. (Cellular One was eventually bought out by AT&T.)

Still, some people believe that substantial changes must be made to the cellular tower ordinance now in place. Former council member George Humphrey has been protesting the 45-foot tower that's gone up between Johanna and Crockett Streets in South Austin. Humphrey says the tower stands less than five feet from an alley and extends over the alley and electrical lines, which goes against city ordinance. Some city inspectors agree with his claims, Humphrey says, but he has yet to receive a formal response from city officials.

And even though the South Austin tower stands 105 feet from single-family residences as required by law, it's only 22 feet away from an apartment complex, which is legal under the existing ordinance. Humphrey wants to see larger setbacks for towers next to multi-family dwellings.

"Should citizens who live in apartments have less rights than those who live in single-family residences?" Humphrey asks. "If for some reason the tower came crashing down, it would crash into the bedrooms of people living in those apartments. Ten years ago, the neighborhood and environmental coalitions would have been all over this."

While driving around town one day, Johnson noticed cellular towers dotting the Austin landscape, often close to people's homes. Upon further investigation, he discovered that the city did not keep accurate mapping of cellular tower locations, so some towers stood within 250 feet of each other. Johnson wants to see provisions for placement and mapping added to the ordinance. He also wants to see co-location of carriers on towers -- that is, separate cellular phone companies sharing one tower.

Austinite Jimmy Castro also became involved in shaping the ordinance revision when he discovered that the cellular tower at Adelphi Lane near Parmer Lane stood on the border of a day care center. At that proximity, if tools or materials were ever dropped by tower workers, they would pose an obvious threat to the children at the day care. Castro lobbied for larger set-backs for day-care centers, which were adopted by the task force in its proposals for revisions to the cellular phone ordinance.

Revisions to the cellular tower ordinance have already cleared the task force and been approved by the Planning and Telecommunications commissions. A public hearing before the City Council is expected later this month.

Proposed ordinance changes include both Castro's and Johnson's suggestions, as well as: