Tweet
print
write a letter
Left to its own devices and the ebb and flow of the free market -- in other words, if the city doesn't step in with a massive overlay -- development in the area will proceed piecemeal, with individual projects applying for zoning, variances, and permits as they come up. The map at right shows the existing lot lines as they stand today.

The heart of Rainey Street itself is listed as an historic district (between Driskill and River streets) on the National Register of Historic Places, but no one quite knows yet what that means for redevelopment.

CBD FANS: These property owners -- including longtime neighborhood leader Bobby Velasquez (1) and downtown mavens Perry Lorenz and Robert Knight (2) -- have formally indicated their desire for a neighborhood master plan that would include "uses consistent with the Central Business District." Some of those properties -- primarily along Red River and East Avenue -- are already home to CBD uses. (Properties in white boxes indicate property owners who are neither opposed nor in favor of a neighborhood plan.) RAINEY STREET CONDOS: Dallas developer Gordon Dunnaway's condo/retail project at the end of Rainey (3) will be "downtown mixed-use" -- more intense than the single-family homes elsewhere on the street, but not as intense as CBD. Dunnaway also owns property north of the condo project (4), which he says he'd like to have included in any neighborhood master plan. CITY-OWNED PROPERTY: The City of Austin owns some 2,400 acres or more along Town Lake. A sizable chunk of that is dedicated to the future Mexican-American Cultural Center (within the dotted line). 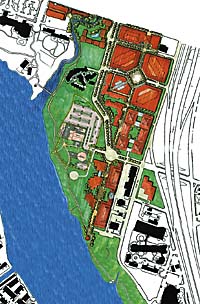 The hypothetical rendering at left, produced by the architectural firm of Graeber, Simmons, and Cowan for developers Robert Knight and Perry Lorenz, shows what Rainey Street might look like as a single major new development, covering dozens of wall-to-wall acres, with space for hotels, condos, entertainment, and retail. The existing street grid could be altered or could disappear entirely; in this version, Red River is extended to a plaza in front of the MACC, and Rainey Street itself is turned into a pedestrian walkway.

Bear in mind that for somthing like this to happen, all of those individual lots shown above would have to be consolidated into one or a few parcels, rezoned CBD, and made available to a single developer. It's unlikely that this could be done without the city stepping in to help broker the deal, and given downtown Austin's history, it's unlikely that any developer would pass up the opportunity to ask for a city "incentive package."