Tweet
print
write a letter
Atheists have prolifically colonized the Internet, with Web sites ranging from the intellectual to the absurd. 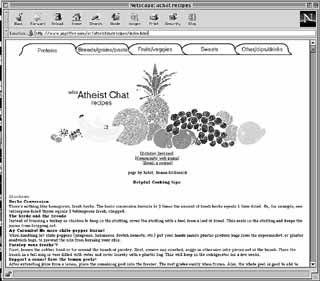 This is an offbeat collection of notable individuals who have been public about their lack of belief in deities. Is it an attempt to make atheism more palatable? All the usual suspects here -- scientists and left-wing Marxists a plenty -- but you'll also find abortion opponents, porn stars, conservatives, comedians, models, musicians, libertarians, magicians, billionaire capitalists, washed-up actors, political leaders, even, the site's editor boasts, "that creepy guy who plays the role of the evil 'Cigarette-smoking Man' on The X-Files." One of the bigger surprises: Christopher Reeve, who despite his near-death experience, has not changed his mind about the existence of God, although he says "he tries to behave as if he does exist." Of course some of the information about the celebs is questionable; other stuff is flat-out wrong. The entry for Madalyn Murray O'Hair says "O'Hair, along with her daughter Robin and son Jon, were last seen in August 1995 and are thought to be alive and hiding out in New Zealand. She is suspected to have absconded with hundreds of thousands of dollars once belonging to the atheist organization she led."
http://www.primenet.com/~lippard/atheistcelebs

The Net has also given birth to minor atheist celebrities like Judith Hayes, aka The Happy Heretic. Hayes' grandfather was a Lutheran minister and her father was a Lutheran pipe organist. She's an atheist: "Now that's my kind of evolution," she says. http://www.thehappyheretic.com

More traditional organizational sites include http://www.americanatheist.org, the home of American Atheists, the premier organization laboring for the civil liberties of atheists, and the total, absolute separation of government and religion. This group was born out of the Murray court case which challenged prayer recitation in the public schools.

Murray's Atheist Community of Austin can be found at http://www.atheist-community.org (at least for now). The site includes quotes, chat groups, legislation information, and something called Books Every Atheist Should Read. On the list: Mark Twain's Letters From Earth and the U.S. Constitution. http://www.atheist-community.org/library_subject_index.htm

Fearsome is the voice of the young, hip atheist -- or at least it tries to be. The year-old atheist Webzine has swelled to 400+ pages of self-proclaimed "atheism hype." http://www.fearsome.net

The voice of young atheism can also be found locally, at the University Skeptics Society site, http://www.utexas.edu/students/skeptics/ and the Texas A&M Atheists & Agnostics Web page, http://atheist.tamu.edu/~aasg/

For a list of even more godless Web sites, see http://www.atheistalliance.org/internet/ -- Lisa Tozzi