A little history: Palmer Auditorium, and the attendant development (or lack thereof) of the south shore of Town Lake, have been controversial since the barn was built more than 30 years ago. In the mid-Eighties, opposition to that era's Convention Center plan -- slated for the Palmer site -- led to a grassroots campaign that got the 54-acre Palmer complex dedicated as parkland. 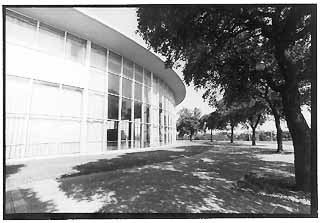 The subsequent Town Lake Comprehensive Plan identifies the south shore as a great "Cultural Park," but it has remained an ugly parking lot studded with ugly buildings. Meanwhile, the real Convention Center has made the complex into the city's public-events dumping ground, the needed but unloved home of SAMI Shows and City-Wide Garage Sales. These events, along with hoedowns at Auditorium Shores, have made the whole complex into the bête noire of the adjacent neighborhoods. Then, on top of that, the University of Texas put local performing-arts groups on notice that its facilities would be unavailable for their use, which punted the Symphony et al. back to Palmer.

So when Mayor Kirk Watson tried (and failed) this summer to swing the Austin Ice Bats onto the south shore, he opened up a big can of worms that, maybe, will be emptied out for good by Props. 11 and 12. If you've lost track, the measures now have nothing to do with the Ice Bats. Instead, they impose a tax on rental cars (in Prop. 11) to pay for construction of a new and better public-events facility to replace the Coliseum. This shed will house the folks currently in Palmer and the Coliseum; meanwhile, Palmer will be leased (under Prop. 12) to a consortium called ARTS*Center Stage, which will use private money to renovate it into an acceptable concert hall. Prop. 11 also funds a parking garage to replace the acres of surface parking now on site; this will allow the remaining land to attain its true destiny as a park.

Got that? Everyone should be happy. But since all the stakeholders feel they have, in the past, been more or less screwed, everyone was instead suspicious. So everyone jockeyed to make their piece of the project the most important one, and the resulting static threatened to sink the whole plan. Enter (as has become customary in such donnybrooks) Councilmember Beverly Griffith.

On Oct. 7, Griffith distributed to her colleagues a "memorandum of understanding" that her office negotiated between the stakeholders -- ARTS* Center Stage; Friends of the Parks; the South Central Coalition of Neighborhoods; and the Junior League of Austin, representing current Palmer/Coliseum tenants. Said MOU outlines a "community-driven master-planning process for the entire proposed cultural park, including the community events center and parking."

The process is explicitly modeled on the third-act resolution of the Triangle flap. Each stakeholder group enunciates in the MOU its "core values," which are basically what you'd expect. The arts groups want the Palmer retrofit to happen promptly; the Junior League contingent wants a quality new facility; the Friends of the Parks want a "continuous and significant swath of open space" connecting directly to Town Lake; and the neighborhoods are mostly worried about traffic. "The stakeholders agreed that their individual goals for the site were not mutually exclusive," writes Griffith.

But, she continues, "they also agreed that developing a master plan that simultaneously reflects [their] core values, while also reflecting the core values of the entire community, would be unlikely unless they could all increase their level of trust in the process." The MOU seeks to do that by ensuring "that each stakeholder group's core values and goals will be respected at every step, beginning with the selection of the master planner." Expect that said planner will be another national superstar, à la Peter Calthorpe's work at the Triangle, or ROMA Design Group's at the New Mueller. (The project has already been advised by the Project for Public Spaces.)

Whether this triage will actually make the Town Lake Cultural Park happen remains to be seen, but it was good enough to sway the most recalcitrant and aggrieved of the stakeholders -- the Bouldin Creek Neighborhood Association. After a "very lively" discussion, the BCNA voted 31-3 to endorse Props. 11 and 12. This sign-off should in turn bring around the Austin Neighborhoods Council, whose okay on these two propositions will give the entire 12-item bond ballot a clean set of endorsements from all the local power players. -- M.C.M.