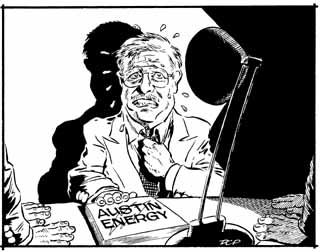 "There are some things I want to say in private... not information I would want to lay out in open session," insisted a seething City Manager Jesus Garza at last Wednesday's council work session. The city's top-ranking bureaucrat insisted on a private airing of the reasons he took the city's electric utility into his own hands following general manager Milton Lee's defection to the private sector.

Garza's crime (or bold assumption of leadership responsibilities, depending on your perspective) was the reorganization of Austin Energy into four divisions, with vice presidents reporting directly to himself. The move might have gone unnoticed, as do most city department reorganizations, had one of these divisions not been the environmental conservation division, which is charged with conserving energy, developing sustainable sources, and the like, and which was heretofore a division of the Planning, Environmental, and Conservation Services Department.

If you perceive a potential conflict of interest between the goal of conserving electricity and the goal of selling it for a profit -- essentially Austin Energy's main reason for existing -- you're not alone. Garza may have feared that you'd see a conflict of interest too, and that may explain why he reorganized the utility -- a move that normally would be preceded by a lot of debate and a council vote -- without informing councilmembers first.

So, when the council wanted to talk it over with Garza, he fought to have it done in private -- and won -- over the objections of councilmembers Beverly Griffith, Daryl Slusher, and Bill Spelman, who voted to have the discussion in public. After the council emerged from about 45 minutes in executive session, they replayed their private discussion for the benefit of the public. Garza justified his actions this way: One, the utility was in trouble, and needed the strong hand and oversight of the city manager. He cited a late budget and other poorly prepared documents as examples of the utility's failings, and said the reorganization would provide him with the "raw, unfiltered information" he needed to "help the council identify clear policy choices."

And two, Garza aims to create a sustainable utility in the face of "forces internal and external [that] are resisting this change." He argued that conservation is not incompatible with Austin Energy's purposes. On the contrary, he said, green energy is a product to be marketed like any other, and essential to the portfolio of services offered by a competitive company in the post-deregulation environment. But Garza believes an institutional/cultural change is essential for the utility to make the transition to competition, and he wants to lead that change.

Garza's first claim -- that the utility is in trouble, and needed to come under his direct stewardship -- is dubious. Councilmembers said they had been unaware of the problems before Wednesday's work session. And Austin Energy's own monthly report for September, presented to the council on the same day as Garza's reorganization presentation, had glowing praise for the outfit's performance, citing the utility's "excellent performance and system reliability" in responding to the summer heat wave. Of four financial performance standards set by the council, the utility met or exceeded three.

But even the existence of serious trouble at the utility would not explain why the decision was made without the approval -- or even the knowledge -- of the council. Though some defended the reorganization as within the manager's responsibilities ("That's what he's there for, to manage," the logic basically went), anybody familiar with the routine work of the council knows that they routinely make decisions of far less import than this one. "It is inconsistent in the sense that this is a bigger thing than some things we do see," said Spelman. He said Garza has made many justifiable changes in the city personnel structure, such as reassigning responsibilities among assistant city managers, but "when he messes around with one of our departments, it's a different story. I would have preferred hearing about it from him than from [environmental conservation activist] Paul Robbins."

It was Robbins who took on canary-in-the-coal-mine duties for the week, alerting councilmembers of the change and warning all who would listen about the dire consequences for energy conservation that could result from the move. "Can you sell energy conservation in the same place you're selling energy?" mused Spelman. "I know it can be done. Whether it can be done at this utility at this time is the question. I'm concerned that you've got old habits that aren't consistent with doing it that way yet." Robbins insisted that Garza acted in an "illegal and manipulative manner," violating Section 3 of the city charter, which provides for the council to approve the creation, abolition, or combination of city departments. The claim was refuted by city attorneys (who, by the way, work directly under Garza), on the grounds that Garza was combining divisions, not departments.

In any case, in a city with the kind of involved environmental constituency Austin has, Garza should have known that moving the conservation department would attract the interest of citizens -- and councilmembers -- concerned that profit and conservation motives might be mutually exclusive. The argument that he just didn't think it was worth mentioning is not persuasive. "Some of it, I think, is explained by the old adage that it's easier to get forgiveness than permission," said Spelman; he thinks Garza expected, "quite reasonably, that the council would say, 'Wait a minute, let's talk about this,' and slow it down."

Public outcry over the move was less than Garza or the council might have feared, though, due largely to the high regard in which the environmental community holds Roger Duncan, director of the conservation department and, most agree, a friend of conservation and sustainable energy. Karin Ascot, Sierra Club conservation chair, commended Duncan's "strong interest in conservation," but warned against creating a situation where the city's commitment to those goals depends on who's in charge: "Structure it so that conservation doesn't become lost and forgotten," she urged.

The reorganization smacks of a power play, an attempt by Garza to squelch the "internal resistance" he alluded to in his presentation to the council. A source close to council says that was indeed the case: "He got pissed off, because [staffers] didn't do what he thought his subordinates should do. He thought they were thumbing their nose at him, so he decided he'd take over the utility for a while and show 'em who's boss." Garza has been making his presence felt at the utility for a while now; gossips comment that Milton Lee left the utility largely due to frustration over Garza's micromanagement. But the pressure on Garza to micromanage is great, said one council watcher, because "if the utility does something stupid, it's Jesus' head on the block." A similar problem plagued former city manager Camille Barnett, whose forced departure was partly a result of the failings of her subordinates.

"It's a very strange thing when the city manager takes over his biggest department; it's difficult enough for [him] to do his own job," said Spelman. "I'm concerned about things falling through the cracks. On the other hand, I'm a fine one to talk." (In addition to his council duties, Spelman is a professor at the LBJ School of Public Affairs.) Spelman said he's currently "gathering information" on the situation, and hopes the council will act within the next 30 days to approve, reject, or modify Garza's changes.

The full pressure of impending electric deregulation has yet to be brought to bear on Austin Energy. When it is, will the commitment to conservation survive as anything more than a gimmick to enhance the "brand identity" that the utility is so fervently pursuing? While Garza's commitment to making the utility competitive seems genuine, his zeal for directing its vision is misdirected. That responsibility should lie with Austin Energy's new general manager who, with any luck, will be an expert in the field, and who should be hired posthaste.