Tweet
print
write a letter
It's not a pleasant thing to think about, but there's an Austin City Council election less than a year from now. Scheduled for May 4, 1996, it will be a rugged race for incumbents. Taxes are soaring, the sales tax surplus has been appropriated for baseball, some 911 calls go unanswered, while the council plans for a new City Hall and performing arts center. Voters could be a little upset with incumbents.

The only incumbents on next year's ballot (assuming they run for reelection) will be Max Nofziger, Brigid Shea, and Jackie Goodman. (The other four seats aren't up until 1997.) This trio, which forms three-fourths of what is often termed - to varying degrees of semi-accuracy - the council's environmental/liberal voting bloc, may be ambling down the road to slaughter.

Imagine this scenario: Local booster forces, led as usual by the Chamber of Commerce and suburban developers, field a candidate slate against the liberal-enviros. Boosters, the crew with their snouts the deepest in the public trough, paste a "big spender" bullseye on the trio. This reckless spending theme plays in an endless series of television attack ads, bankrolled by the developer-banker-corporate-Chamber axis. The same themes will play as investigative journalism in the monopoly daily newspaper.

Then, just as May, 1996, rolls around, another set of devastating property tax reappraisals arrive on voters' doorsteps. A few days later, the booster slate sinks the liberal-enviros like tax dollars down a municipal utility district (MUD). Then it's open season on the city treasury and the countryside as the council's conservative crew - Ronney Reynolds, Eric Mitchell, and Bruce Todd - are joined by three new allies. Reynolds, Todd, and Mitchell will then run for reelection in 1997, arguing that they need another term to keep cleaning up the mess left behind by the enviromaniacs.

I came up with this little scenario on my own, but I wasn't the first one to publish it. Consider the following from the March 24 Neal Spelce Austin Letter, an insider tip sheet put out by the former TV newsman and veteran local booster. Pointing out the three seats that will be on the ballot, Spelce writes: "Those three vote most often as a bloc, and are considered by many to be the most liberal, most environmentally oriented members of the current council.

"Political pros say this is an ideal election situation if you are on the side supporting a wholesale change in the council make-up. The public perception is that `Brigid, Max, and Jackie' (that's how they're referred to) are so closely linked politically that an opposition effort can easily lump them all together - `tar them all with the same brush' if you will.

"Animosity against the city council for any action, or inaction, in the past few years can be tapped by a `clean sweep' campaign... Campaign organizers anywhere would lick their chops at having such a tasty morsel put on their political plates."

The "animosity" to be "tapped" is plentiful. Watch for "fiscal irresponsibility" to play against a backdrop of "declining city services." Business professionals, it will be argued, are desperately needed to come in and get things in order. The top theme, however, will be wasteful spending, with those pointing the finger being some of the biggest beneficiaries of the largesse.

Meanwhile, in East Austin, boosters will paint the environmentalists as insensitive clods who care more about insects and reptiles than disadvantaged children. The goal will be not just to win East Austin, but to sow seeds of doubt about those enviros in the minds of social-policy-oriented liberals.

While the potential for a liberal slaughter is great, the boosters may have some difficulty pulling it off. One problem would be compiling a booster slate that isn't tied to irresponsible financial policies themselves. Another danger for boosters is overplaying their hand (a frequent occurrence) and running a nakedly developer-controlled slate. This could backfire.

Austin boosters are nothing, however, if not brash, and they will have a virtual bottomless pit of money from which to blare their message. Also in their corner will be the daily newspaper, ready to pound away at the three liberal-enviros and extol the virtues of the "business" slate.

It's important here is to distinguish between the three incumbents, something boosters will try to avoid. They do not have identical records on finances. Shea, in fact, surpasses all her colleagues in fiscal sanity. She is the only councilmember who regularly questions spending initiatives, even though she frequently ends up voting with the rest, which will make it easier for boosters to "tar" her with the same brush as Nofziger and Goodman.

Nofziger has made some fiscal stands - against cellular phones and corporate tax abatements for example - but he has also voted for a long list of spending projects, and supported a property tax increase last year. Goodman has rarely if ever raised a fiscal whimper, and also voted in favor of a tax increase last year. She might, however, be stronger in East Austin than the other two, in particular for the hours she has devoted to working with social service providers.

This brings us to a second school of thought on next year's election. This theory holds that the Chamber crowd won't run anyone against Nofziger and Goodman because they are harmless - not a threat to Chamber-booster interests. Neither has caused any serious waves, although they did anger booster forces by voting against February's Barton Creek PUD deal. In general, when Goodman or Nofziger do disagree with the dominant drift, neither devotes much effort to turning things their way. They are not political horse traders or voting bloc builders. They either don't have much understanding of such concepts, or don't care to engage in such activity.

Backing up this scenario, the Chamber crowd has a long history of supporting incumbents, no matter their alleged political persuasion, as long as they don't threaten the dominant orthodoxy. Nofziger hasn't had a Chamber-backed opponent since he took office in 1987. And, to seasoned observers, Goodman's mysterious meanderings on the Barton Creek issue, and some other matters, look like maneuvering to head off a Chamber-backed opponent.

Shea, however, will not get a free pass under any circumstances. She not only questions fiscal policies, but is also the only councilmember who ever questions the overall direction of city government. Also, her tough scrutiny of the Barton Creek PUD deal kept a council majority from voting in favor of it in both 1993 and this year. For these reasons and more, Shea will get a Chamber/booster opponent if she runs again.

And as for Goodman and Nofziger, even if the Chamber ignores them, that doesn't mean the two will automatically win reelection. Challengers will likely emerge from the ranks of what is generally termed the fiscal conservatives - in this case meaning mainly old-school, self-made business people who question both the city's spending policies and competence. There might also be challenges from religiously driven elements, with some potential for overlap between the two conservative coalitions. Such overlap could win voters for the conservatives of both colors, but ultimately risks painting the old schoolers as fringe candidates.

If the old schoolers avoid those associations and instead pull off a common-folks image, both Goodman and Nofziger could be vulnerable. In this way, a de facto slate against the liberal-enviros could emerge, without there being official or direct alignment with the Chamber. A "toss 'em all out" mentality, as described by Spelce, could take hold from these roots, and in such an atmosphere, Austin's fiscal conservative voters are much more likely to support Chamber candidates than any of the liberal trio. The big bucks of the boosters, combined with grass roots organization of the fiscal conservatives, could be extremely formidable.

This brings us to what is probably the biggest tragedy of Austin politics, if not American politics: the failure of those bearing the labels "environmentalists" and "fiscal conservatives" to unite or cooperate. Both groups are getting gored, and this alliance cries out to be forged. Look, the city treasury and this region's natural beauty have been plundered for at least 20 years, often by the same boosters. This reality is recognized by many local citizens who grieve at the destruction of our natural resources while their cost of living soars to finance the booster-driven policies of local government.

Despite the gap, most fiscal conservatives favor some form of regulation and believe in a government safety net. And many of the projects opposed by environmentalists have also been incredible financial boondoggles. Environmentalists, after all, were the first opponents of Austin's worst boondoggle of all, the South Texas Nuclear Project. Nonetheless, the two groups can't seem to find common ground. If they ever do, the alliance could be a powerful force in Austin politics, one that's long overdue.

I might discuss this dilemma at more length in the future, but for now let's return to the potential fate of the three enviro-liberals up for reelection next year. What can they do to save themselves, as well as the city's treasury and its remaining natural beauty? The obvious course of action would be for the three to issue a call to fiscal sanity. They could demand a halt to all big spending projects until the fiscal house is in order. They could then promote some drastic changes in fiscal direction during the upcoming budget season. All this would distance them from their wild-spending colleagues, as well as throw a life raft to taxpayers. Their spending brethren might even fall into line. If not, the three could argue that their reelection is imperative to keep the others from gutting the treasury.

The second, and more serious, problem with the call to fiscal sanity approach is that at least two of the incumbents, Goodman and Nofziger, don't seem to think that there's a problem. Look at the warnings on the budget: Major funding increases are needed just to keep enough police, fire, and emergency vehicles on the roads; city buildings and our streets are crying out for basic maintenance; and calls to 911 sometimes go unanswered. Yet the council continues to focus on spending and new projects rather than on basic city services. Shea could pursue such a strategy on her own, but doesn't seem willing to distance herself that much from her colleagues.

So on they go, down the road to the slaughterhouse. And the city is going with them.

When Did the Single-Family Home Go From Being the American Dream to an Urbanist Nightmare?
One policy wonk's view of how we got here 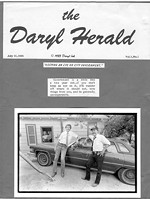 So Long to My Other Brother Daryl
Slusher remembers Janes