A tribute to tattoo legend Shanghai Kate, Hi How Are You Day, and Karima Walker highlight our recommended shows 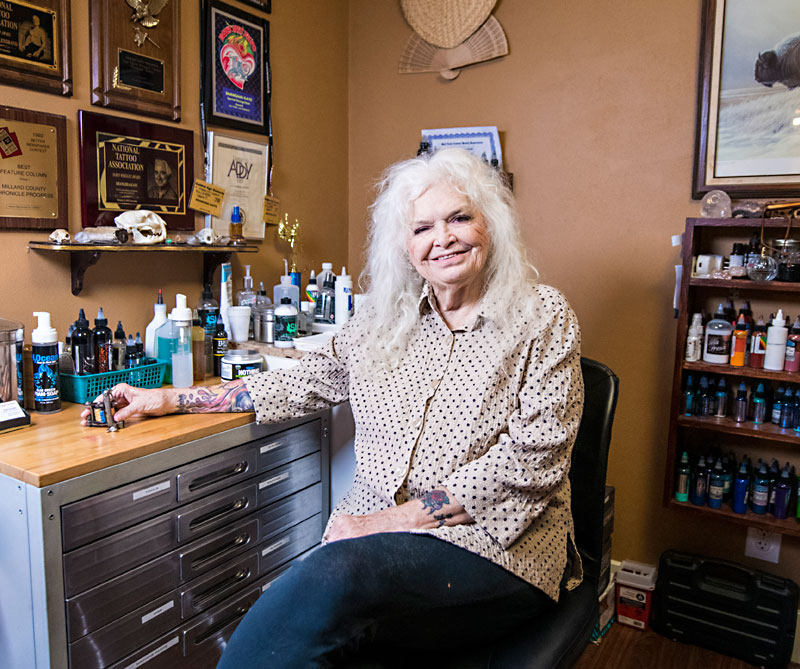 "First time I remember meeting her was at Shady Grove at a Shinyribs show," writes in said bandleader Kevin Russell, veteran Musician of the Year in the Austin Music Poll (ongoing now). "I thought she had the most beautiful eyes. I had no idea who she was."

In fact, when Kate Hellenbrand died on Nov. 15, 2022, at the age of 79, she left her mark on humanity literally. Sailor Jerry protégé, Michael "Rollo Banks" Malone facilitator, and Ed Hardy mentor, the tattoo trailblazer shut down Shanghai Kate's Tattoos on Guadalupe four years ago, but ATX bears her sign no less than the Longhorns branded into every other live music capitalist. The intersection of sound and insignia looms large for legacy country mavericks Fingerpistol.

"She designed the cover of Fingerpistol's Bakersfield country-style CD Stepped in It Again," emails front humorist Dan Hardick, (in)famous as this publication's TMI Luv Doc. "She's also been on the Fingerpistol party bus on several occasions. She was, as you might imagine, quite an entertaining iconoclast and an extraordinarily interesting person."

$33 admits to the Mohawk and a Hellenbrand art show at the neighboring German Free School – benefiting Tattoo Heritage Project and ushering the Star of Texas convention. Shinyribs' Gulf Coast conjurer continues: "When she came to shows I was always happy to see her. I have no tattoos. Don't know much about that world. But I did know Kate. So I reckon the first tattoo I get will be of her. If I could only look into her eyes again."  – Raoul Hernandez

Over nearly a decade, local imprint Keeled Scales has built a roster of provocative and eclectic songwriters, championing an emphasis on emotionally impactful artists who find power in the quietest crevices. The Cactus hosts three of the label's best, with Will Johnson headlining behind the indie troubadour's post-Centro-Matic solo releases Wire Mountain and El Capitan, two harrowing yet gorgeous platters. Karima Walker floats in from Tucson with 2001's Waking the Dreaming Body, looping patient songscapes unfolded in hushed tones, while ATX's Jordan Moser winds with tender melodies through the Long Night.  – Doug Freeman


Two Nights of A Giant Dog

Any divide between the clever-yet-sincere folk lyricism of John Craigie's albums and the stand-up-comedylike storytelling of his live performances was only exemplified by his dual 2022 releases: the restrained and emotionally roiling LP Mermaid Salt and a hilarious recording of him pondering the Beatles, Abbey Road Lonely. The Portland folkie touches down on South Lamar for two nights with Grace Rowland, known for leading beloved coffee-shop-Americana combo the Blue Hit and then psych-folk favorites the Deer. The singer and multi-instrumentalist also captivates in a stripped-down setting, accompanied here by husband Jack Wilson.  – Kevin Curtin

Local singer, bandleader, producer, Bandstand Presents founder, and general overachiever Christian Wiggs continues his quest to connect Austin's fertile jazz scene with the rest of the planet by bringing in Steven Feifke for a co-leader show. The latter Manhattan School of Music-trained pianist and composer has been credited with revitalizing the big band form, writing for everyone from Michael Dease and Chad Lefkowitz-Brown to the Vancouver Symphony Orchestra and Jerry Seinfeld's Comedians in Cars Getting Coffee. With his own wide-ranging sensibilities, serial collaborator Wiggs should prove an excellent foil for Feifke's swinging, melody-first aesthetic.  – Michael Toland


City of Caterpillar, Portrayal of Guilt

Let's consider Portrayal of Guilt's hellward trajectory in tectonic terms. Before Austin's heaviest exports could mill about in the molten mantle, they were a feral flesh-storm careening into the crust. That's to say, before POG played slow-tempo sludge metal, they were a crazyass screamo band! All comes full circle as the trio opens for one of their former (or perhaps future? POGLP2023!) genre's formative groups – Richmond's City of Caterpillar, who recently released a spindly, apocalyptic sophomore album following a 20-year gap. Glassing's earth-pounding post-rock and the garage emo of BFF round out the lineup.
– Julian Towers 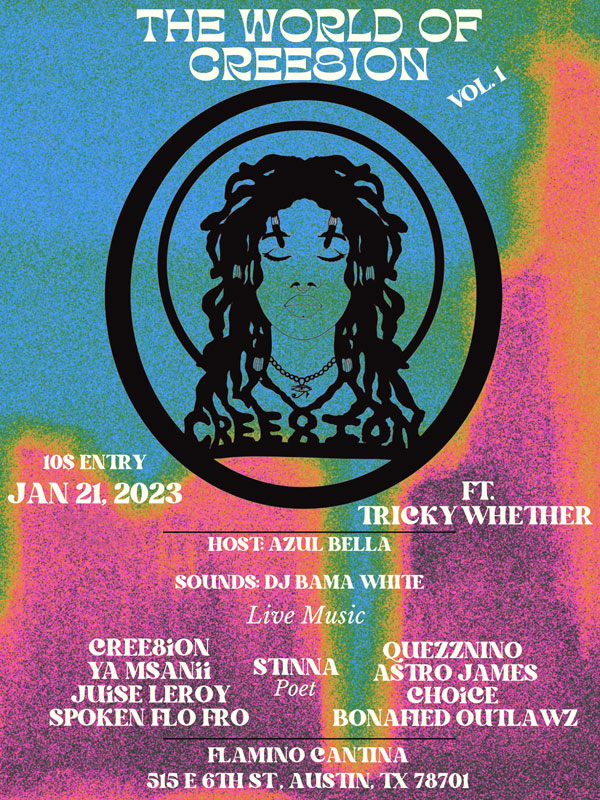 The beloved Riverside staple celebrates its 10th birthday with Tate Mayeux and friends.

The World of Cree8ion Vol. 1

Members of Spanish-language rock groups such as La Ley, Elefante, and Jaguares band together for a collective tribute of their greatest hits. 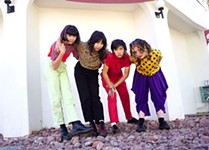