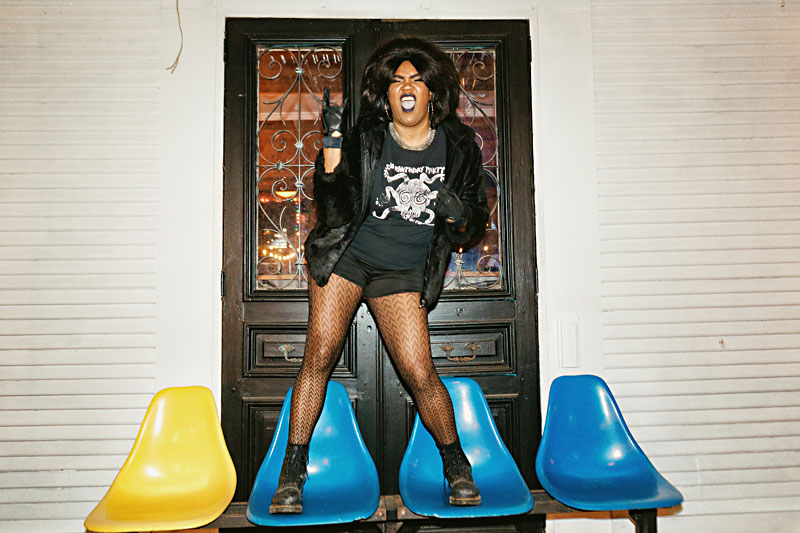 Over a cigarette and a Deep Eddy Ruby Red cocktail, Pleasure Venom principal Audrey Campbell says a 2018 Twitter shout-out from Bikini Kill's Kathleen Hanna played "a big part in legitimizing us, even in Austin." Her bandmates nod in agreement, situated around a rusting table at the newly opened Tweedy's patio, formerly Spider House Cafe.

"That was a really fucking big deal," Campbell continues. "Up until then, it was really hard. I felt really isolated. We're too melodic for [the] hardcore, noise, punk scene. We're too dance-y for indie-pop.

The question of belonging has followed the Houston native since her 2012 return to Austin, half a decade after an initial two-year stint at St. Edward's University. The ex-marching band field captain and Baptist church chorister was eager to make "weirdass fun music" and experiment with her creativity as an adult artist coming into her own. Campbell instead faced feelings of isolation in a rocky musical landscape lacking representation and the eccentric sound she set out to create. 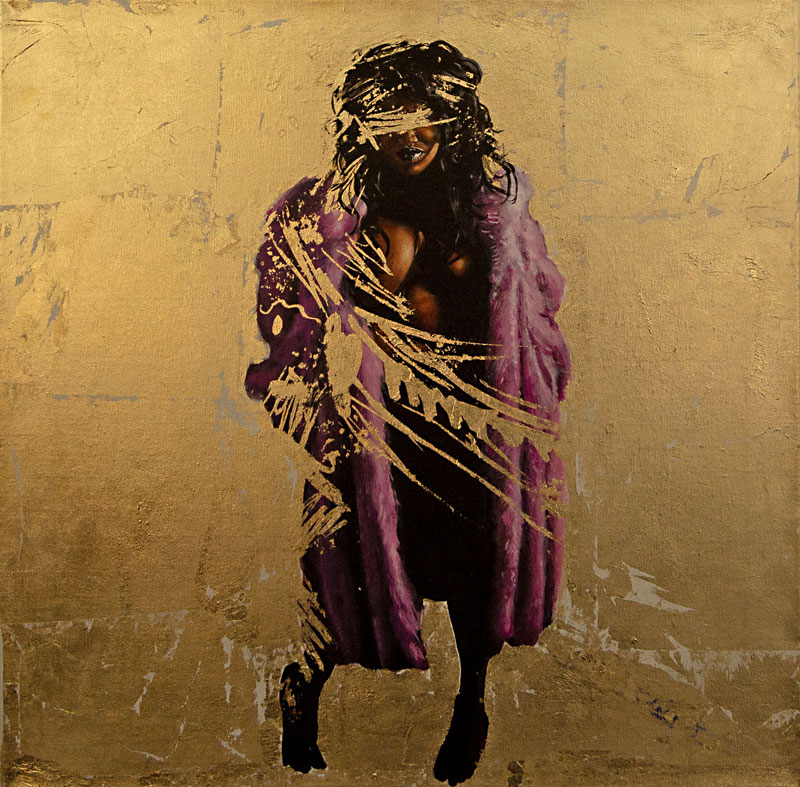 Of Austin's Black punk scene a decade ago, she says: "It was just me, Black Mercy, and BLXPLTN." After hopping across various punk bands and completing a brief run as a trumpet player/backup vocalist for Danny Price & the Heist, Campbell was ready to take charge of her music. Enter Pleasure Venom, the experimental garage punk fourpiece she founded in 2014.

"I did a few projects where they never left the garage," the lead vocalist/songwriter reflects. "I started to feel like I could get a lot done, and my bands would leave the garage, if I was at the helm.

"Being a vocalist, whenever you're auditioning for bands, you're being handed music and they're like, 'Write to it.' I felt this weird disconnect, because I had nothing to do with creating the sound. I really wanted to do a project where I was a lot more involved on the music, producer, [and] creating end."

Since its conception, Pleasure Venom has cycled through a rotating cast of musicians save for Thomas Valles, drummer and Campbell's boyfriend. The two met at a North Austin open mic, where a birthday celebration-turned-meet cute ultimately resulted in his addition to the band. Roster transitions persisted into the COVID-19 pandemic, during which Chase Dungan (Other Lovers) and Jordan Emmert (SUPER THIEF) joined the group on guitar and bass, respectively.

"I saw this whole progression," says longtime PV supporter Emmert. "Audrey and Thomas are the driving forces. I was thinking, 'I don't want to keep playing music and stuff.' [But] having some known commodities in Audrey and Thomas, I was like, 'I would definitely like to be involved in that.'"

Drummer Valles remembers: "We were all in a sore spot dealing with band dynamics. There was a moment of having to build some trust between each other, to know what this new thing is. It worked out very well by the end."

“I did a few projects where they never left the garage. I started to feel like I could get a lot done, and my bands would leave the garage, if I was at the helm.”   – Audrey Campbell

Rounding up singles of the past few years "We Get What You Deserve" and "Severed Ties" – the latter produced by Frenchie Smith alongside "Lose It!" – Rebirth/Return captures Pleasure Venom's live-wire trajectory with majority production by Elliott Frazier. Campbell describes the Ringo Deathstarr singer, who has worked closely with the band since their 2018 self-titled EP, as a "secret fifth member." During recording, Frazier encouraged in-studio reenactments of live performances and tracked the band's parts together instead of separately.

"Our first few records, we were making them in our bathroom or bedroom," remembers Campbell. "We've been getting closer and closer to how we sound live ... He gets the power and energy that we want."

The new album's steadfast vocals, revamped percussion, and complementary guitar-bass dynamic declare Pleasure Venom's strongest formation yet. The singer also highlights her bandmates' hyperattention to detail and a desire to "gag each other" (or impress each other) with their musicianship while writing and recording.

Beyond one-ups, Rebirth/Return also served as an unexpected outlet for each member's personal hardships as they processed loss, illness, anger, and confusion. Valles notes going to therapy for the first time and focusing on mental health during the process. Guitarist Dungan, who faced the tragic passing of his sister and was later hospitalized with COVID-19, says the album's 2021 creation provided a reset.

"I poured all of that into music," he says. "I was recording just tons and tons of guitar songs. There were a few where I said, 'Hey, this would be really badass with Audrey, Thomas, and Jordan.' Everything just flowed. The four of us had this synergy together, and it was really cathartic to get all this emotion out and shed old skin." 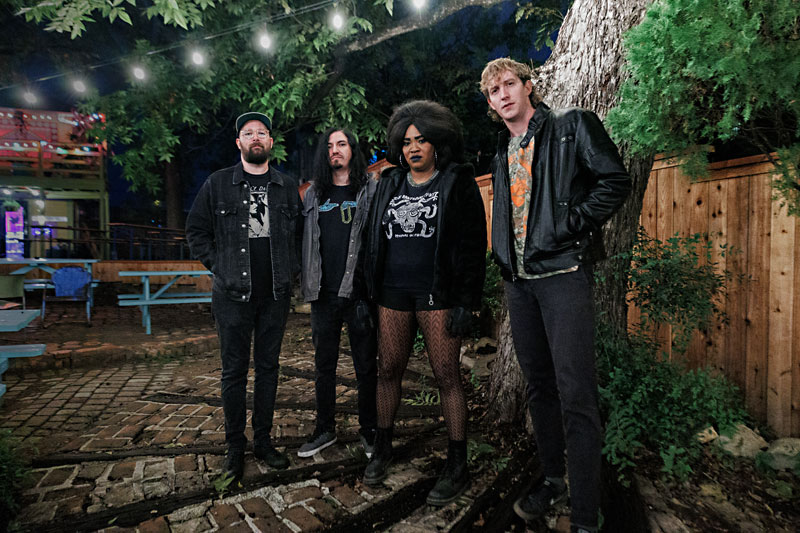 Catharsis proves a central theme across the album's 39 minutes of raw, unbridled emotion – mainly led by Campbell's darkly honest lyricism, but equally supported by her band's brutally thunderous instrumentation. Opening trio "Behind Their Eyes," "Severed Ties," and "Peril" weaves piercing riffs and sludgy bass crawls beneath the leader's grappling with looming thoughts and past trauma. Rebirth/Return largely claws into a collective heaviness before the band tears past their struggles, poised to overcome with cool rhythms and softer vocals in "Lose It!"

"I always hope that it's not all doom and gloom," Campbell says. "To me, it's like I'm trying to push through my depression, my anxieties, whatever I'm dealing with that day. There's a silver lining to our music. It's not, 'Everything's bad and we're all going to die,' because then there's nowhere to go. I don't want to stay there. I'm trying to fight and not kill myself today, or whatever else I'm dealing with."

Standouts "Acidity" and "Sucker" churn unpredictable nü metal chaos via Dungan's and Emmert's curling riffs and Valles' pummeling percussive blitz. In "We Get What You Deserve," Campbell unleashes her fury with a howling, "Getting tired of living this shit!" This swirling anger composes the other driving force behind Rebirth/Return: societal unrest – touching on experiences with post-traumatic stress disorder, police brutality, and widespread systemic oppression.

"Overall I have frustrations with the world, and I'm disappointed in the lack of progression," Campbell sighs. "Like right now, antisemitism is still a thing. The fuck is going on? It's absolutely unacceptable and so fucking wack that we aren't as forward-thinking as I thought we would be 10 years ago, or when I was a kid.

"You think things will get better, and it's like, 'Why are we still having these conversations?'"

Though Campbell says an "endless list of things [she's] mad about" drives her writing, a glimpse of hope shimmers beneath the seething verses and noisy aggression of Rebirth/Return, encompassing a healing slate for the group.

"A big part of this is encouraging each other," Campbell says. "We need this. We need to be here and do this. It makes us all feel better."

The Austinites' other form of consolation? A thrashing and grooving audience – which offered Pleasure Venom a seal of punk approval when the band opened for cult visitors L7 at Mohawk during Levitation. Earlier this year, an introductory performance for Bikini Kill checked another full-circle moment on Red River Street. Beginning to speak for the group, Dungan remarks: "Come see us live."

After a pause to seek approval from his bandmates, the guitarist continues in the collective.

A chirpy chorus of emphatic yeah!'s erupts around the table, valiantly enthusiastic given the 40-degree evening chill. By endorsement from punk luminaries or bandmate encouragement – belonging, indeed. 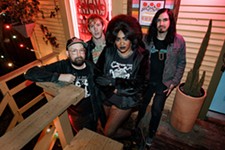 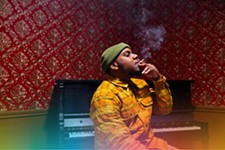