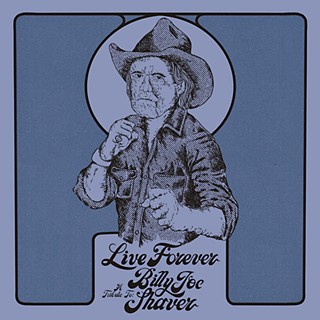 
Billy Joe Shaver proclaimed his destiny on 1993 locomotive Tramp on Your Street: "I'm gonna live forever/ I'm gonna cross that river/ I'm gonna catch tomorrow now." As produced by Charlie Sexton and Freddy Fletcher, mostly here at the latter's Arlyn Studios, Live Forever: A Tribute to Billy Joe Shaver proves the trailblazing roots righteousness of its country-loving truthsayer note by note, line by line, proselytizer by proselytizer. Resurrecting the title track's crystalline trot first, Willie Nelson sets a throaty, reedy tone alongside Lucinda Williams' tart twang. That touches off a murderers' row of heavy hitters as crowned by King George (Strait) himself distilling "Willy the Wandering Gypsy and Me" like God's own whiskey. Rodney Crowell inhabits "Old Five & Dimers Like Me" as if he wrote it, while Nathaniel Rateliff booms, "Let the world call me a fool!" on "You Asked Me To" in the second coming of Waylon Jennings. The chorus counters: Longview Texan Miranda Lambert weakens knees with her superstar drawl atop "I'm Just an Old Chunk of Coal"; Margo Price testifies with Joshua Hedley on "Ragged Old Truck"; and Allison Russell sanctifies "Tramp on Your Street." Honky-tonk heaven.  – Raoul Hernandez 
As if bouncing off the wooden floorboards of an empty cathedral hall, voices swell and rise on opener "Tree Funeral." An all-vocal album, with the exception of a touch of nylon guitar on "Make Me Love," Pregnancy Choir digs in – clawing back layers to reveal a beautiful glimpse into motherhood. Expecting her baby Juno during the time of the album's recording, Austin's Jenny Parrott bares a vulnerable and honest portrayal of pregnancy. Each blanketed vocal coalesces into a maelstrom on the cerebral work, either ascending into pining supplications ("Rain") or sinking into a densely knotted array of voices ("Origin"). In "6 Rows," Parrott's husked timbre and soprano weave delicately in solemn introspection, while "Runnin' to You" rings ebullient like a gleeful church chorale. Joyful, somber, chaotic, and dissonant all at once, an internal chorus grapples with the realities of pregnancy, from the thrill of life to the policing of women's bodies.  – Alejandra Ramirez 
Constructed of members from Magnet School, Schatzi, and Honeyrude, Startographers don't just recall that magical time when guitar rock meant shimmering distortion, jangling riffs, and soaring melodies – they embody it. Static Calls sounds like the glory days on the cusp of the Nineties, as Americans realized fuzz boxes could be used for more than power chords and before Brits discovered the shuffle beat. "Brick Balloon" and "Tied Up in Tokyo" marry six-string firestorms to sing-along melodies to induce closed eyes, dreamy swaying, and raised lighters. Soaked in delay and distortion, "We'll Go Down Together" and the title track match wistful romanticism with gauzy grunge, like shoegazer ballads made for the prom. Singles "Hollow" and "Backslide" scan lush and bruising, while "Icicles" drifts down with absent vocals and gentle feedback like an electronic ghost. Admittedly, there's little here that crosses the boundaries around postmodern guitar rock, but Startographers play with such obvious love for and facility with the form, it doesn't matter. Dedication serves Static Calls well.  – Michael Toland 
A true shape-shifter in terms of his artistic aesthetic and uncanny flows: Germany-born, Austin-raised emcee/producer Y2 still finds ways to evolve on what he brands as his 23rd studio album. YaaYaa begins with heavy opener "Uncle JJ," where an upbeat, exotic instrumental unexpectedly complements a stream of Olympic-paced introspection. To introduce the 15-track project, the artist discusses reaching a new financial bracket via a growing catalog of sync placements, battling sorrow over a slain relative, avoiding subsequent isolation, and parenting his son. Beats – of which Y2 produced nearly half – turn progressively darker with "Grill Muzik," featuring the sliding bass typical of Brooklyn drill. The jarring chords on "Jet Lag" clamor for inclusion in a horror film score. As the production morphs, a constant remains: Y2's technical ability to command attention with every syllable.  – Derek Udensi

Former Standing Waves mainspring Larry Seaman says his latest release, recorded by Ron Flynt with help from Steve McCarthy and Whit Williams, covers "the confused state of mind the country is in." The solitary track was issued one month before the midterm elections. Being an old-school pop craftsman, Seaman couches his political commentary in the form of a love song, begging his beloved to escape this shitshow inside what resembles a White Album outtake. Complete with mock George Harrison lead guitar, it's a subversive and effective tactic.  – Tim Stegall