Producer Christian Herrera Is Building a Hub for Austin Hip-Hop 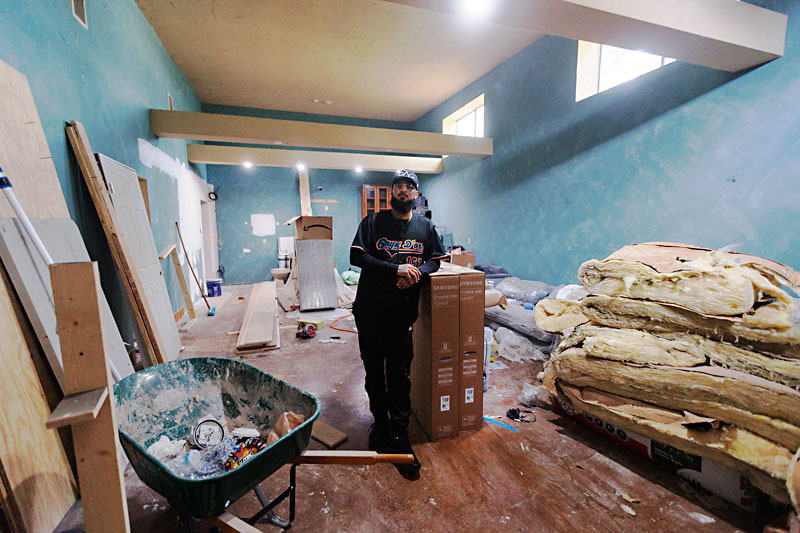 When Christian Herrera – aka local producer the Mask – was in seventh grade, he had no interest in music. With his family going through hard times, his stepmother brought him to a church so the pastor could pray over them. When the pastor laid hands on his head, she told Herrera that he had a gift for music, and that it would be his path in life.

Herrera says he didn't think much of the experience when it happened; he dreamed of joining the Army or becoming a Navy SEAL, like his cousin. But the pastor's words eventually came true as he discovered his path in life was to create music, becoming one of Austin's foremost hip-hop producers. Full-circle, Herrera now builds a large, multiuse recording studio and creator space, intended as a true community hub for Austin artists.

He hopes for the newly named Elevate Network to foster the next generation of Austin talent as the ultimate sanctuary for Central Texas hip-hop, R&B, and beyond.

Taking up just under 5,000 square feet of a 15,000-square-foot warehouse at 10203 Old Manchaca Rd., the multiroom studio will include four audio production suites, as well as dedicated spaces for photography, podcasts, merchandise, lounging, and a reception area. Herrera and his two silent partners started building in May and hope to open in January 2023. The facility joins a number of far-South Austin music activations near Slaughter & Menchaca, including rock-and-country-emphasis spots Sam's Town Point, Armadillo Den, and Moontower Saloon.

The new studio represents a bigger, better version of Herrera's previous Elevate Recording Studio at Music Lab's now-shuttered St. Elmo rehearsal facility, which he had developed into a gathering place for the Austin scene. His mood-lit rooms cultivated singles and albums for local standards like Abhi the Nomad, Blakchyl, Alesia Lani, the Teeta, and Y2. Elevate also became a go-to for national acts like DaBaby, NBA YoungBoy, and Sauce Walka to lay down features while in town.

“Over time, I got more confident in what I was doing and who I was. Now I know the community I need to nurture.”   – Christian Herrera

Herrera lost his old studio space in the February 2021 sale of Music Lab's final Austin location. Displacing a number of musicians, teachers, and studios, the building became a Tesla showroom. When the sale forced him out, Herrera took it as a sign to grow the studio, physically and as a brand.

Born at Austin's Brackenridge Hospital, Herrera was raised on the Eastside by native Austinite parents. He spent much of his early childhood at his grandmother's house on Airport and Manor before moving to South Austin with his mother. After his parents divorced when he was in the fifth grade, Herrera was sent to live with his father and stepmother in San Benito, Texas. The artist remembers he "couldn't take the small town" and itched to get back to his birthplace.

With parents working for the state and city governments, he was the first in his family to pursue a creative field, which wasn't seen as a solid career option. However, two months after the pastor miraculously prophesied his talents, Herrera was inspired by a youth pastor performing Christian rap and began dabbling in music. By eighth grade, the youth pastor provided Herrera's first visit to a professional recording studio, in McAllen.

Although Herrera is no longer part of organized religion, he credits the church leader as a formative mentor. After initial production forays into Christian rap, by the time he hit high school, he was hooked on all kinds of beat experimentation.

"I was using the equipment at school, because I couldn't afford my own," he says. "I was only in ninth grade, and most people are still trying to figure out what they want to do at that age. I was already almost there."

Seeking to hone his skills, Herrera enrolled in the Art Institute of Austin and rented an apartment on Riverside. The day he graduated high school, when his friends were all partying on South Padre Island, he immediately drove to Austin and began studying audio engineering. At that point, he hadn't started making his own beats and wanted to learn the mechanics behind the magic.

Though ultimately cut short after three years because his financial aid ran out, his institute tenure taught him the terminology and techniques to parlay into his production. 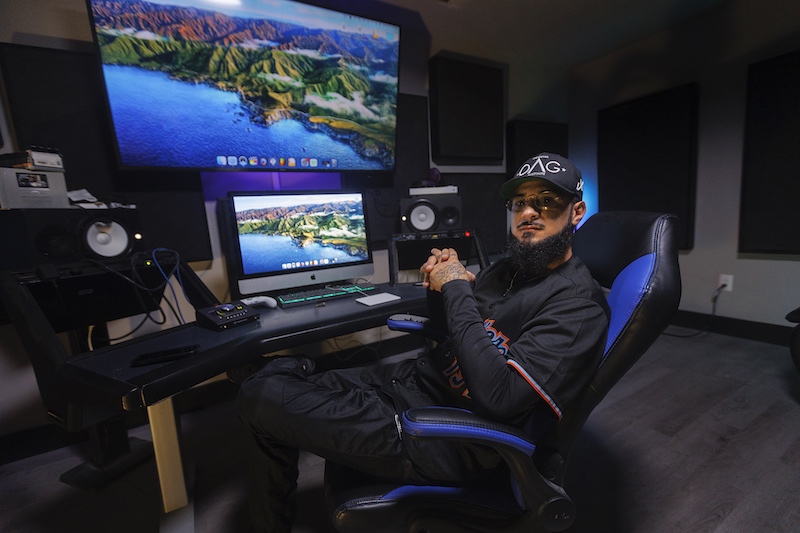 After dropping out, Herrera moved in with his grandmother – still at their original Eastside house – to help take care of his great-grandmother, and worked odd security jobs while he figured out his next move. Gradually integrating himself into the hip-hop community over the next few years, he mixed his first real-deal album for longtime Austin rap group Mindz of a Different Kind in 2015. For payment, Herrera was given the choice between a half-zip A Bathing Ape-branded jacket or $300. He chose the jacket, which he still cherishes to this day.

In 2016, he met Austin MC Sertified – the first artist he produced for – through mutual friends, ultimately an instrumental collaboration in introducing him to the scene. Herrera adds: "Through Sertified, other people started finding out about me and were like, 'Yo, this guy is really good at what he does. Where the fuck did he come from?'"

Herrera adopted the Mask persona around this time and actually wore a white Jabbawockeez mask while at shows and socializing. From 2013 to 2016, he wore the face covering because he was self-conscious about a blue birthmark on his face – which started as a barely noticeable blue pigment near his eye as a child, but spread onto his cheeks and forehead as he grew older. Ditching the mask, he's kept the moniker, an acronym for "Music Art Self Knowledge."

"I started wearing that mask when I was going out because I wanted to peep the scene without people knowing who I was … They knew I was there, but they didn't really know who I was," says Herrera. "Over time, I got more confident in what I was doing and who I was. Now I know the community I need to nurture."

From popping champagne to being generous with take times, Herrera wants to continue that nurturing at the new Elevate Network. Austin rapper the Teeta, who recorded his 2019 album Teeta World at the former studio, says he's "run into everybody" at Elevate and finds that there aren't many other spaces that "cater toward hip-hop artists in general." In a city where hip-hop acts often struggle to find accepting and affordable access to recording studios, Elevate provided a warm environment.

Austin's Mama Duke, who often worked in the space and writes collaboratively with Herrera, says: "In hip-hop as a queer, biracial woman, there's not a lot of safe spaces. It's a boy's club. The Mask was always one of those people who allowed me to pull up."

Over three years at Music Lab, preserved in Quin NFN's viral 2018 video for "Talkin' My Shit," the old Elevate became a hip-hop hot spot. After months of planning and searching, Herrera signed the lease for the new space in March. More than just a place to record, he wants it to be an epicenter for all types of artistic endeavors.

"Elevate was the ultimate church," says Herrera. "Now we're trying to build this hub where people can come and freely create."