Review: No One at the Circus – The Story of Ghostwriter Through Place and Song

In one-man band's situationally annotated lyric book, the path is the goal 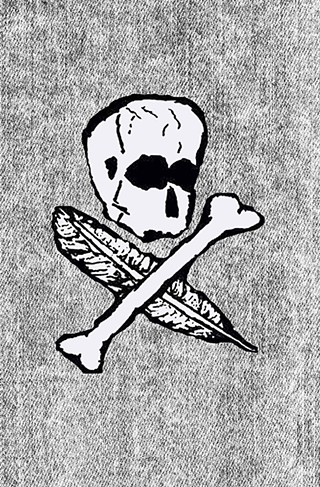 "I've spent my entire life doing something I can neither explain nor fully understand. Much less command," Steve Schecter admits on Page 1 of No One at the Circus. Schecter – an enthusiast of old Nissan pickup trucks and 4-track recording who performs an abrasive strain of punk blues under the moniker Ghostwriter – is referring to songwriting. The Austin-based guitarist, foot drummer, and raw vocal stylist has issued 10 albums since 2003 filled with songs written quickly, with minimal revisions, to capture their natural essence. What any of them specifically mean will remain up to interpretation, because their author rejects explanation of his desperate and defiant-sounding compositions in this paperback, instead laying out the circumstances surrounding their time and place of creation. As such, No One at the Circus is a memoir and philosophical treatise disguised as a lyric book.

"I sleep best on a foam mattress/ Home too long and I always get restless/ Look like a character you don't mess with/ Everywhere I go I know a three-dollar breakfast." So go the lines of "Maverick" from 2006's The Darkest Hour (The Last Adventure Is Here), ever in Schecter's AAAA-patterned, quatrain style.

As it does in Ghostwriter's lyrics, life as a road dog factors heavily into Circus, which details two decades spent driving around America on DIY tours, playing shows, selling self-released records, and sleeping in the back of his Nissan. I've often joked that being a semi-truck driver is like being an independent musician without the moments of humiliation, but Schecter (who actually has a song titled "Kinship to Truckers") exudes a blue-collar artist ethos that comes across as extraordinarily grounded and spiritually self-sustaining. Other themes emerging in the six chapters interspersing eras of lyrics are going at it alone, falling in love, perseverance, and small-town life. Ghostwriter, fittingly, hails from a ghost town: Friend, Oregon – population less than 20.

On that topic, he writes: "I am overly sensitive to the barrage of misconceptions about rural people being narrow, dim, or worse, compared to our city-raised counterparts. I will concede sheltered. In my opinion, people from all over can be dim-witted or narrow-minded, and city-dwellers might benefit from the principles found in rural communities. Maybe even find wisdom."

It's unusual, and admirable, to read a book by a musician who never writes anything to insinuate that they are good or successful, though Ghostwriter's commitment is glaring. Without stating it outright, the text emphasizes the profoundly meaningful impact a music career, with the mindset that "the path is the goal," has on one's life – even though it ends in lament over independent artists becoming reliant on corporations and smartphones turning people's attention away from their surroundings. In all, Schecter's wisdom, humility, and perspective bring about notions bigger than his music and make you wish more artists published situationally annotated lyric books. Call it a discography of life.

No One at the Circus: The Story of Ghostwriter Through Place and Song

A version of this article appeared in print on September 23, 2022 with the headline: No One at the Circus: The Story of Ghostwriter Through Place and Song