Netflix's Stranger Things has been providing quite a service to Eighties pop hitmakers – if certain oldies find play on the popular streaming thriller's soundtrack, a turbo-boost in their fortunes is possible. "Running up That Hill," the 1985 single with which ethereal British pop thrush Kate Bush is most identified, is a surprise summer hit after featuring a few weeks back as ST character Max Mayfield's favorite song. It currently sits at No. 4 on the Billboard Hot 100, after peaking at 30 on that U.S. chart in 1985, earning Bush an estimated $2.3 million, 29 million U.S. streams, and surreal glory of pop culture omnipresence. Austin celebrates with a Kate hootnight writ large featuring such notable local acolytes as Sabrina Ellis, Kalu James, Golden Dawn Arkestra and Trouble in the Streets vocalist Nnedi Agbaroji, Urban Heat's Jonathan Horstmann, Benjamin Violet of Pelvis Wrestley, and KVN to pump up the coffers of food insecurity relief program Free Lunch. – Tim Stegall 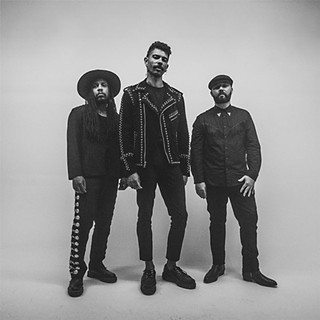 There will likely be a car idling by ACL Live's back door, waiting to dash Urban Heat leader Jonathan Horstmann from his appearance at the Kate Bush tribute to Hotel Vegas for his own record release party. The Wellness EP is six slices of darkwave synth-pop that scan like Depeche Mode or Erasure undergoing serious therapy, filled with Horstmann's dramatic baritone, burbling analog synths, unrelenting drum machines, and post-Peter Hook basslines. And while Horstmann acknowledges the EP's theme is everyone's precarious mental health these days, as well as "the things that trigger us and the ways we cope," he insists that the overarching mood is, "We're going to get through this together." Perhaps the glossy electro surface sugarcoats the bitter pill Urban Heat asks you to swallow, with a nice antidepressant finish? Seems so, as the trio's recent single "Have You Ever?" went crazy on TikTok and amassed 230,000 Spotify plays. Philadelphia's similarly minded Lovelorn and not-too-dissimilar locals Holy Wire prime the stage. – T.S.

Knife in the Water, Conrad Keely, the John-Pauls


Self-dubbed "the Ghost of the West," Angel White's intriguing musical identity is yet to be discoverable by the masses. With no tracks on streaming, the Dallas singer leaves fans yearning after dropping teasers of future soulful Western sounds and stark, stylistic imagery. Catch him live on Friday playing before smooth indie rock quartet Night Cap, whose appropriately titled latest single, "Sentimental," exemplifies their shaped-by-emotions approach. – Alyssa Quiles


Jazz trumpeter/bandleader Dr. Adrian Ruiz has long been a favorite in Austin clubs, a popular session cat, a respected educator, and a veteran touring artist with global gigs and a Grammy nomination. His 2017 album Premiere: A Collection of Originals cooks, but this show at Parker Jazz – also livestreamed – will be where it's at to best appreciate his vision. A former teacher at UT-San Antonio and Austin's St. Stephen's Episcopal School, Ruiz moves to Iowa in mid-August to become director of jazz studies and instructor of applied trumpet at Simpson College. Take advantage of this gig if you can. – Michael Toland


Chucky Blk is Austin's musical poet of the people and Daniel Fears, with his rich and complex stylings, stands among the town's most dynamic modern R&B vocalists. Friday's come-together at Far Out, though, surrounds the release of Shimmer Island's No Man Is an Island EP. It's a five-song set of love-forward, healing-centric, softly sung, gentle folk-pop that sounds like it's floating in space,but doesn't ignore the challenges of life while looking for the light. Its best track, "Alone in Chicago," pulls from the pain of singer Jeremy Roye putting his 8-year-old daughter on a one-way flight to France at the height of the pandemic "without knowing when or how I would see her again." Subtly New Agey, Shimmer Island promises "chanting, dancing, and even meditation." – Kevin Curtin


Pop punk's not dead – a mantra decried by proponents of a genre once laid to rest on a mainstream scale – continues to prove true. This Saturday, the Buda venue will host myriad tribute sets for pop punk's finest before Bowling for Soup ("So stick with us/ 'Cause …") headlines. – Derek Udensi


Canadian pop punk/rock band best known for 2002 classic Does This Look Infected? Fellow pop punks from the country that birthed Celine Dion, Simple Plan ("I'd Do Anything") opens. – Derek Udensi


The versatile Austin local celebrates his latest album, U > Everything Else, which received release on Tuesday. Khxnid! and Scuare provide support. – Derek Udensi 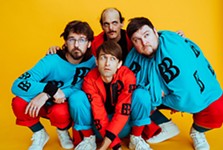 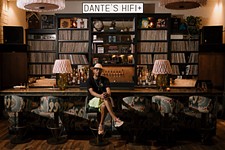