Tickets on sale now for the 40-year tradition, March 8 at Emo's 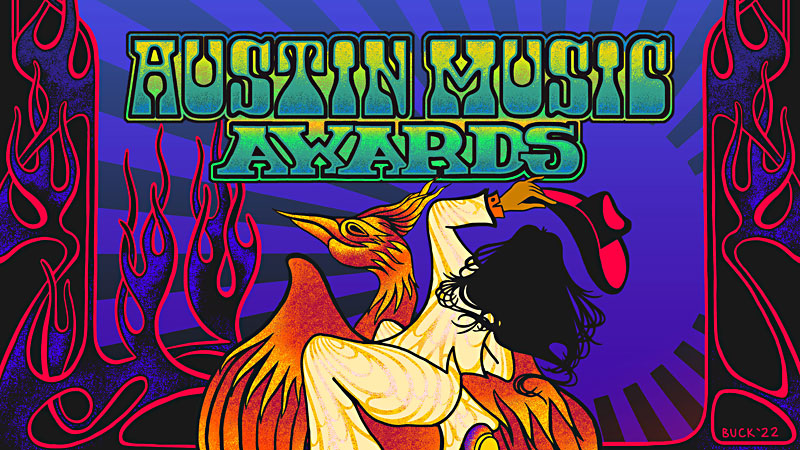 If you're unfamiliar with Greek mythology or Harry Potter, the fiery red bird on the poster means to indicate – we're back. As created by Best Poster Artist winner Billie Buck, a hat-tipping cowgirl rides a rising phoenix like a bucking bronco. That's how thrilled we are to get out our boots, dresses, and suits to keep the 40-year tradition of the Austin Music Awards running.

After valiant efforts by Music Editor Kevin Curtin to deliver last year's COVID-era awards in his van, the annual event returns in person on March 8. Having hopped around venues since its launch at Club Foot in 1983, and most recently a stint at the Moody Theater, the event tries out storied Riverside club Emo's for the first time. Tickets are on sale now for $25, with proceeds benefiting the SIMS Foundation. Find info at austinchronicle.com/austinmusicawards.

Also for the first time, the Chronicle music team works with local music fixture Paul Minor – known for engineering/booking at Hole in the Wall and the ABGB – as the show's producer. If there's such thing as an Austin Music Awards EGOT, Minor takes the cake as a Hall of Fame inductee, awards show performer, Best Live Sound Engineer winner, and longtime champion of the AMAs. Another fresh addition is this year's emcees: endlessly enthusiastic KUTX radio host Taylor Wallace with acerbic and music-loving Austin comedian Avery Moore, veteran of fests like FunFunFun and Moontower.

Alongside the big reveal of the publicly voted winners in categories like Band of the Year and Best New Act, the show rounds up a stellar slate of performers across genre and generation. The jam-packed variety show, full of special guests, tributes, and treats, features just about as many past and current AMA nominees as possible.

Upping the experimental fusion, Lindsey Verrill and Jeff Johnston of Little Mazarn join percussionist/vibraphonist/joy-and- mischief-spreader Thor Harris and innovative cellist/composer Joey Reyes in a special pre-show instrumental set. The awards show, kicking off at 7:55pm sharp, is presented by the Society for the Preservation of Texas Music, The Austin Chronicle, and Capital Metro. 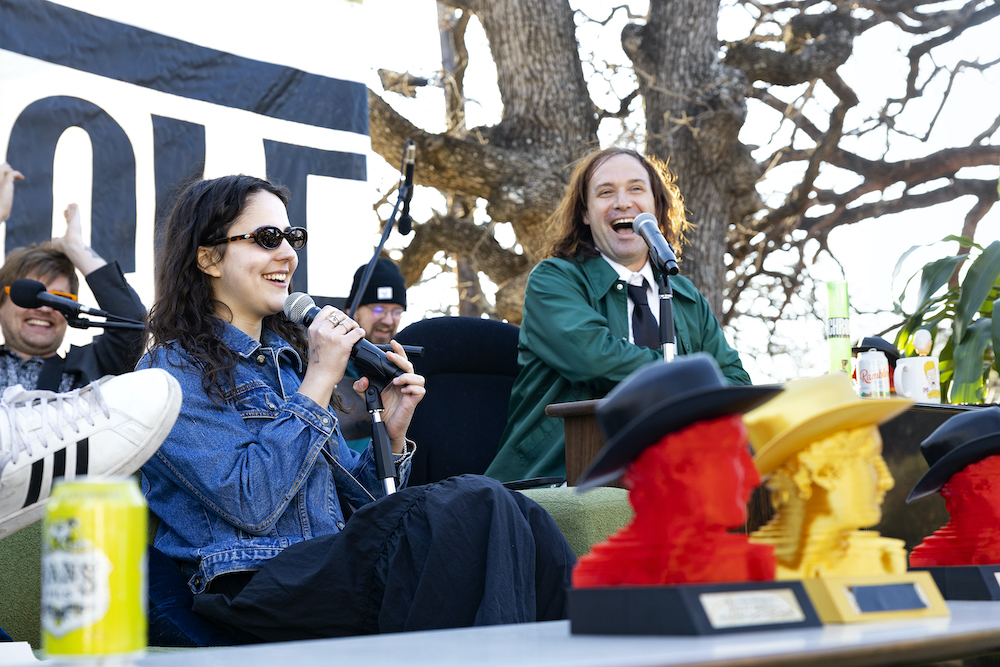 Yours truly and host Kevin Curtin at the Austin Music Industry Awards, backed by the Berkshire Hounds. (photo by Jana Birchum)

With a budget battered by a pandemic year, perhaps a proper reflection of the creative sector overall, the Austin Music Industry Awards bravely ventured where we'd never gone before.

Precisely, the undeveloped lot next to the Chronicle offices, on a wooden stage flanked by the volleyball court and dwarfed by a self-storage facility. To our surprise, representatives of Austin industry perhaps enjoyed the casual digs more than the former Emo's stage – calling it old Austin, very Eighties. A few compared the sunny Sunday afternoon shindig to an outdoor wedding, and certainly had some love to share for Austin onstage.

Instead of podium speeches, they lounged on the couch as guests on Chronicle Music Editor Kevin Curtin's new cable access talk show, Couch Locked. (Coziest couch squish goes to all six staff members of the Best Music Nonprofit-winning HAAM.) Co-host Mike Wiebe appeared bandaged and bloodied, emerging from a coma so Curtin and faux-stage producer Sarah Wolf could catch him up on all the terrible things that have happened in the past two years.

Of plague and NFTs, the saddest audience "aww" came for a reference to the 2020-shuttered Barracuda. 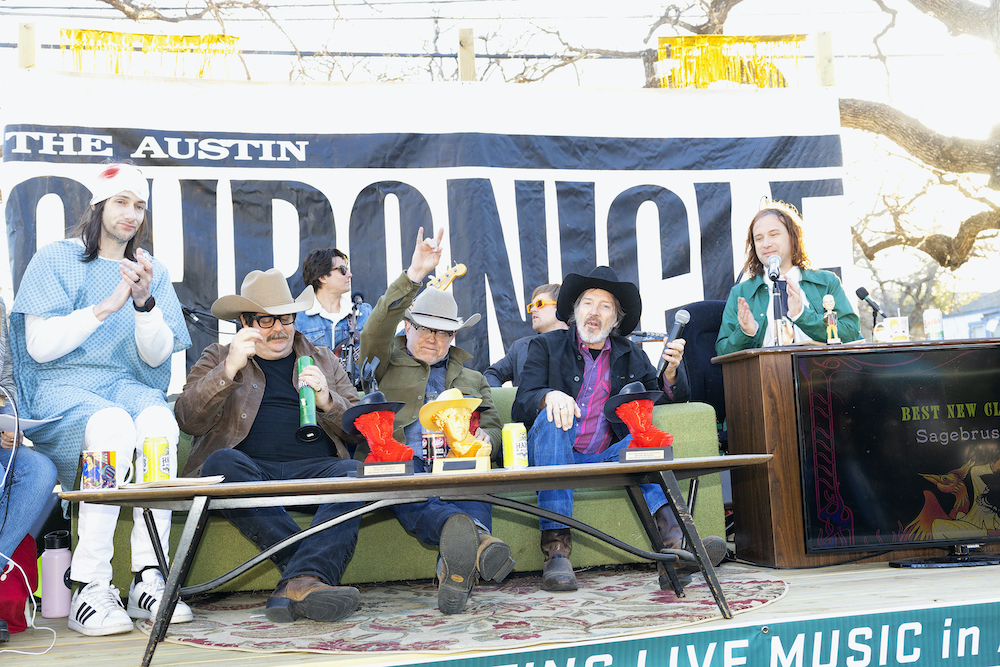 As the successor of John Aielli's longtime drive-time slot, KUTX's Taylor Wallace accepted the legendary Eklektikos host's Hall of Fame award: "If you have ever, before 9am, been tasked with finding a dozen or so songs on the subjects of pie, wind, dirt or purses, you may have been John Aielli's producer," said Wallace.

Aielli himself, who retired from the air in 2020, sent a sweet video from home. After mentioning some of his favorite artist interviews – Shinyribs, Asleep at the Wheel, Shakey Graves, Tameca Jones, Atash, and Peter Bay – the host added: "I just kept you in touch with what's going on and played you some good tunes to listen to, and maybe had a comment or two about life that was worth your attention."

In the struggling music economy of the past two years, declaring love for Austin can feel like an act of resilience. Reigning Best Radio Personality winner Laurie Gallardo thanked a friend who once found a note at the White Horse "that actually said 'Citizens Against Laurie Gallardo,' because that kept me going." In a letter read by wife Celeste Quesada, Best Producer (and Black Pumas guitarist) Adrian Quesada joked: "I'll forever represent Austin, even though I am looking at real estate outside of it on the daily."

A switch up from recent years in the Best Music Festival category showed the growth and perseverance of Levitation, which returned to Downtown Austin in fall 2021. Joined by Black Angels bandmate and fest co-founder Christian Bland, Alex Maas graciously delivered the evening's best acceptance.

"We're extremely grateful to be noticed in this city," said Maas. "Thanks, because we thought that we were much better than Austin City Limits, but now you guys verified it."