Finding More Eaze in the World of Experimental Pop 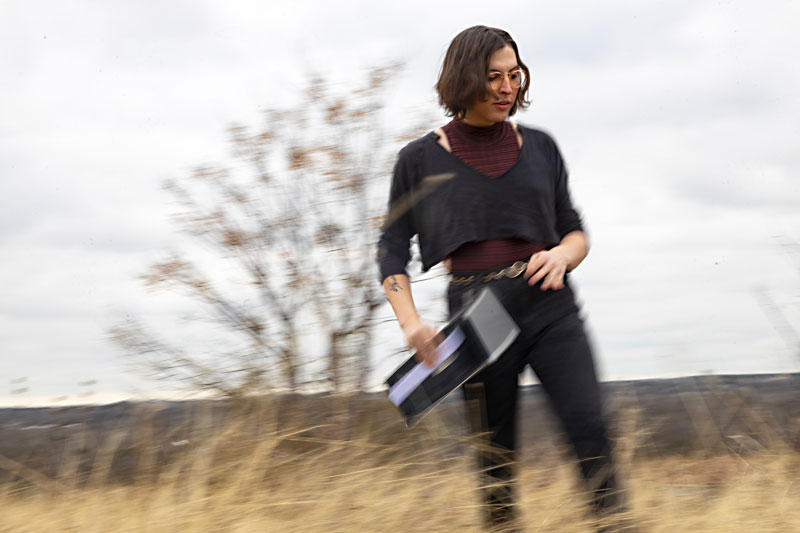 You come away from a conversation with Mari Maurice with homework. To listen to the ahead-of-its-time 1999 Jimmy Eat World album Clarity, which she says would be highly regarded if released by a young band today. To check out the country music history podcast Cocaine & Rhinestones, which once explored the telepathic relationship between Buck Owens and his guitarist Don Rich.

I typically shy away from these types, based on my blurry memory for LP titles. But unlike with some audiophiles and encyclopedic music wonks, you don't leave a conversation with Maurice feeling silly. Her files are pulled from such unexpected folders, no one could really be expected to keep up.

As an ambient composer and Auto-Tuned vocalist, Maurice has played with prismatic forms of pop under the name More Eaze since 2015, often exploring themes of gender and genre hierarchies as a trans musician. Her upcoming record, Never Stop Texting Me, out Feb. 11, continues this effort with close collaborator Claire Rousay. The title references streams of YouTube links and messages sent back and forth, which hasn't ceased since meeting eight years ago.

"She'll text me, 'Hey, I don't know if I really dug the third track on this record,' about something I've never even heard," recaps best friend Rousay. "She's never pretentious about it. She consumes so much media that everything she does is informed by everything, and I don't know very many people like that.

"You can't put her in a box, because she's constantly building the box."

Before they met, Rousay used to sneak in to watch high-school-age Maurice lead San Antonio act the Gospel Choir of Pillows, a baroque-pop ensemble. The latter's obsession with connecting threads began then. Maurice remembers even obsessing over music she didn't like, attempting to figure out why she didn't like it.

"A huge part of growing up was going down rabbit holes," says 32-year-old Maurice. "I'll click on every single related artist's Spotify page or recommended albums on Boomkat or Pitchfork. If I think something is really meaningful, I want to find out, 'What else sounds like this? Where is this music coming from?'"

Arguing that she does indeed rest between her seemingly constant stream of creative output and day job, she adds, "Since getting back from tour and having COVID, I've done nothing this week other than watch Succession."

Alternatively, Rousay brings up her friend's viewing habits in a separate conversation.

"When I watch Succession, I'm like, 'Damn, Shiv is so hot,'" Rousay exemplifies. "When Mari watches, she's like, 'Did you know in this scene there's some tension here?' and sending me articles about it."

"One time he was like, 'On this track, I'm going to stick a microphone outside of my house while you play,'" remembers Maurice. "That was this huge, brain-exploding moment for me as a 16-year-old, starting me on this path I've been on forever now. It made me consider all these different ways you can think about sound and how the environment affects it."

“You can’t put her in a box, because she’s constantly building the box.” – Claire Rousay on Mari Maurice

Maurice earned local recognition for her teenage recordings, once opening for Bill Callahan. She moved into electronic creation while studying at San Antonio's Trinity University. Suddenly desperate to escape her hometown, the artist applied to graduate school in Music Theory and Composition at the California Institute of the Arts completely based on Julia Holter mentioning her education in press for the 2011 album Tragedy, another of Maurice's obsessions.

"I was always interested in stuff beyond pop music, but working with pop music and all of these different influences," she says. "During my undergrad, there was a constant struggle to get people to understand what I wanted to do. At CalArts, I would bring in pop songs I was working on in equal regards to more serious, avant-garde compositions. They were fine with that, and that's really rare in academia."

Parity of ideas, despite genre, is inherent to the co-working of Maurice and Rousay. They officially met following Maurice's post-grad move to Austin in 2014. Their best-friendship garnered critical acclaim last year with the release of An Afternoon Whine, a collage of electronic whims and intimate field recordings, like scurrying dogs and soft chatter.

"It's similar to how we approach more serious collage music, but with these stylistic signifiers," explains Maurice. "Here's this guitar that sounds like Third Eye Blind or Blink-182, but we're going to put all these synths on it, because we love SOPHIE and hyperpop and a lot of PC music. Then, we love the serious Musique Concrète too."

The duo wrote An Afternoon Whine and Never Stop Texting Me in tandem, not always initially differentiating which project songs headed for. Still adjusting their prolific output to the timelines of album packaging and increased interest, Maurice and Rousay considered dropping both albums online on New Year's Eve 2020. They opted to wait for incoming contributions by How to Dress Well and Bloodz Boi for Never Stop Texting Me track "missed."

Cosmically, Maurice showed Rousay Bloodz Boi's music just a week before the Chinese artist reached out about collaborating. He joins acts like Yung Lean and Bladee on the innovative emo rap label YEAR0001, a big influence on the production of the pair's new album. "Cool connecting with the boys," summarizes Rousay.

Rousay remembers recently listening to a musician friend's unreleased work, without credits, and immediately recognizing Maurice's production – a Juicy J sample and "like 1000 trap hi-hats, but panned in this really specific way that only Mari does." Under this shared recognition, the two continue their ongoing collaboration.

"The breadth of things that we talk about and want to explore is very vast, but also very similar," says Maurice. "The hallmark of all collaborators I've worked with is genuine curiosity. Claire and I both, like, love music. It sounds so simple and cheesy, but we do." 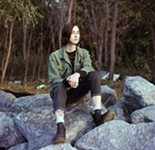 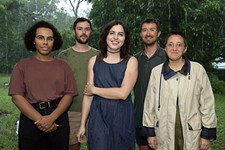 Faster Than Sound: Alexalone, All Together
Soft-spoken guitarist details world-building Polyvinyl debut – with help from bandmates