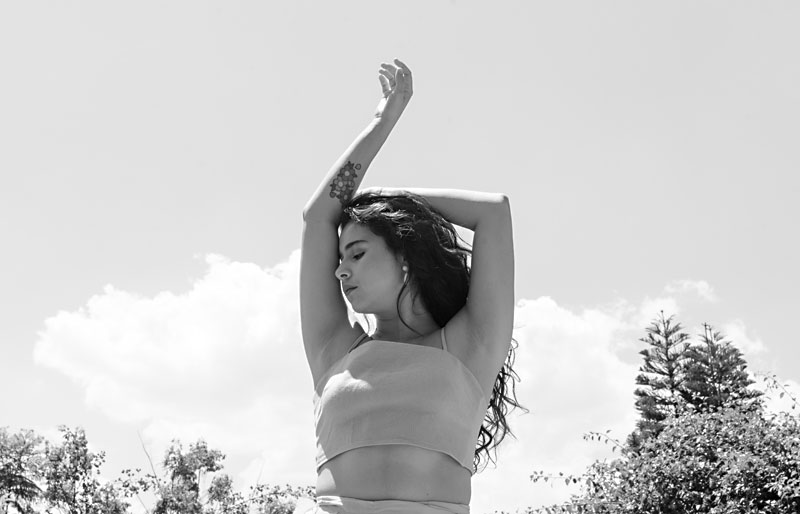 The Far Out Lounge, Thursday 3

Silvana Estrada is the 24-year-old folk singer-songwriter from Veracruz being called the "millennial Chavela Vargas." She can build her own stringed instruments by hand and has – at least as a kid – but she was also raised by luthiers and surrounded by music, eventually studying jazz at a Mexican conservatory and making a beautiful album with Charlie Hunter. Her debut solo full-length, Marchita, draws from Veracruz's native style jarocho, a delicate, chiming music largely drawing percussion from the feet of dancers, but this is no dance LP. Marchita also pulls from biting rancheras for an intensely intimate story of post-breakup disillusionment played on a Venezuelan cuatro. Full of melismatic singing, Silvana work is all poignance, vulnerability, and drama, like a late-night fiesta that veers into drunken, tearful karaoke. "This whole thing of singing songs and drinking and crying at some point – even if we are partying, we get to do that and it's not like a heavy thing to do," Silvana tells the Chronicle. "I have this deep connection with 'bad emotions' and 'bad feelings,' and in Mexico, I feel like we have a deep connection with sadness and loss … but then we have this amazing cultural thing of finding beauty in everything … I have a lot of that in what I do. And even Marchita is a celebration of a breakup." – Christina Garcia


Genuine Eastside juke joint the Skylark Lounge reopened in a burst of communal goodwill and soul last November, shuttered some 20 months due to the pandemic. "[We're] connected to what live music is locally and what it means to that neighborhood," pledged owner and ATX native Johnny LaTouf. Extending a legacy of Black R&B at the sugar shack, he stages gutbucket blues rockers Rochelle & the Sidewinders, led by vocal blowtorch Rochelle Creone and Zeppelin-esque ax master Tom Coplen. "Every snare crack, riff bend, sax flare, and vocal wring snaps, crackles, and rocks," wrote the Chronicle of 2020 breakout Something Good. Club, meet a club wielder. – Raoul Hernandez


With sliding Telecaster twang on top of a nostalgic garage rock sound, Loteria plays like a honky-tonk's rock & roll house band. Including members of the Motel Ball Band, Berkshire Hounds, Bad Lovers, and country act JD Clark's Stuck in the Mud Band, the Austin fourpiece rings in the release of Texas Toast, their first LP since 2014's Party Favors, with a party at Feels So Good Records (211 E. Alpine). Dark country act Rattlesnake Milk and ex-Strange Boys songwriter Ryan Sambol open up along with newer outfit the Honky Tonk Time Machine. Admission is free, which feels so good. – Robert Penson


Chinese Year of the Tiger, 2022 notches a decade since guitar hero Nick Curran drove down to the proverbial crossroads at the crushing age of 35. Benefiting homegrown lifesavers Health Alliance for Austin Musicians in his memory, 20 contestants fire up bellies 'n' beer prompts in the outback of Sagebrush for Chili Cold Blood's labor of roots possession and blues. Mayeux & Broussard's red beans & rice injection, tall Texicana tales of rock adventures, rides shotgun, while lysergic je'Texas spikes their acidic blues, and newcomers Little Bear stack onto the all-day soundtrack of four-alarm Austin grit for a cause legit. – Raoul Hernandez


"Clotilda's on Fire," opening Shemekia's Copeland's latest LP, Uncivil War, recounts the burning of the last slave ship in Alabama in 1859. The song is less an ending than a beginning of reckoning with our American past and the wounds that still bleed in the present, capped in the title track's refrain: "Nobody wins an uncivil war." Nominated for a Best Contemporary Blues Album Grammy this year, the Will Kimbrough-produced platter pinnacles Copeland's poignant songwriting and powerful vocals with A-list contributors including Jason Isbell, Jerry Douglas, Sam Bush, and Duane Eddy. A timeless testament to our times. – Doug Freeman


Burial in the Sky, Fleshbore


The eclecticism of Philadelphia's Burial in the Sky makes them part of the new wave of polymath metal acts that don't see any reason why larynx-fraying screams, knuckle-breaking guitar riffs, wispy acid interludes, and jazz fusion saxophone shouldn't exist side by side in the same track. The band's multihyphenated heaviness reached an apex on last year's The Consumed Self, celebrated here. Indiana deathcore quartet Fleshbore rides shotgun in support of latest release Embers Gathering. – Michael Toland