What We're Listening To Right Now Few local artists stayed as musically active as Kydd Jones during these past 22 months. The East Austin emcee combines 11 previously released cuts with five brand-new ones to deliver an enthralling package of tracks representing his first album since 2018's Homecoming. On it, Jones strikes through myriad hip-hop/R&B sounds and mints his first collaborations with fellow local stars Jackie Venson and Quin NFN. "Crispy Sprite" rightfully opens the project with the words "release therapy" before a soothing sax guides listeners into another delightfully mellow song, "Harpoon." "Sam's Club" features the aforementioned reigning Austin Music Awards Musician of the Year providing a guest verse over an instrumental containing slight electric guitar assists befit for her discography. "Jet Seats" sees the LNS Crew founder infectiously declare his need to "get used to this ice like Gretzky," while the 21-year-old NFN member says he may just go to Chicago to grab another advance. Onyx D'Or (No More Waiting) streams everywhere, but Bandcamp's got the extended version. – Derek Udensi

Bassist Ingebrigt Håker Flaten has lived and made music all over the globe – from his native Norway to Chicago to Mexico City to, for the longest period of his life, Austin. The pandemic put him temporarily back in his home country, but once an Austinite, always an Austinite (just ask Lucinda Williams). Alongside local gigs and his Sonic Transmissions Festival, he includes Austin in (Exit) Knarr, a musical travelogue commissioned by the prestigious Vossa Jazz Festival. Like the planet on which they were recorded, the songs stretch far and wide, tapping as many influences (free bop, Latin music, fusion, spiritual jazz) as there are locations that inspired them. The melodic, vibrant "Brinken," named after the Trondheim neighborhood in which Flaten currently rests, feels key – it's music made by a man at peace, but still excited by the future. "Miles Ave," named after Flaten's Austin street, interprets this constantly evolving city through a mess of handclaps, horn bleats and guitar squeals before locking on to his bassline and riding it to the finish line. Austin may not be his physical residence for the moment, but (Exit) Knarr makes clear that Flaten will always consider it, and the other cities to which he pays tribute, home. – Michael Toland


Carson McHone Cries All the Colors on "Still Life"

There's a double entendre at work, intentionally or not, in "Still Life." The term refers to an age-old painting style: realistic depictions of inanimate objects – fruit, vases, flowers. Then there's the existential wordplay: with "still," used adjectively, meaning "remaining alive" or, as a noun, connoting a life without motion. Austin-born-'n'-raised songwriter Carson McHone, now residing in Canada, presages her Merge Records debut with the strongest single of her career. Poetically honest as ever, in a slight voice – big with emotion – she depicts a sleepless, tasteless, monochromatic passage of time, erupting with the novel hook: "I cried all the color from my eyes" – still somehow sounding resilient. The production, boiling into an emotional explosion of cyclonic distorted guitar and incessantly plinked piano, fits an album deserving of bigger stages than the country bars where she cut her teeth. – Kevin Curtin

The last time we heard new music from Berkshire Hounds, they were pouring a glass of wine on the seductive, Marvin Gaye-like single "Let Me Be Your Sherpa Tonight." Now, the gang, containing the leads from Magic Rockers of Texas and PR Newman, are back with a fun song about existential crisis. "Isn't It Great?" arrives as a speedy dose of guitar-riff-fueled power-pop where every section sounds like it could be the chorus. Spencer Garland uses different voices – goofily optimistic and sneering – to convey life's various states of confusion. If I ever said, "May the Berkshire Hounds never grow up," I'm eating my words. – Kevin Curtin 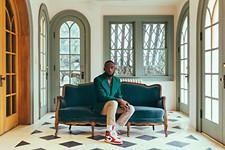