At an age when most perferformers are preparing to take a bow, jazz singer Mac Mcintosh is hitting the stride. 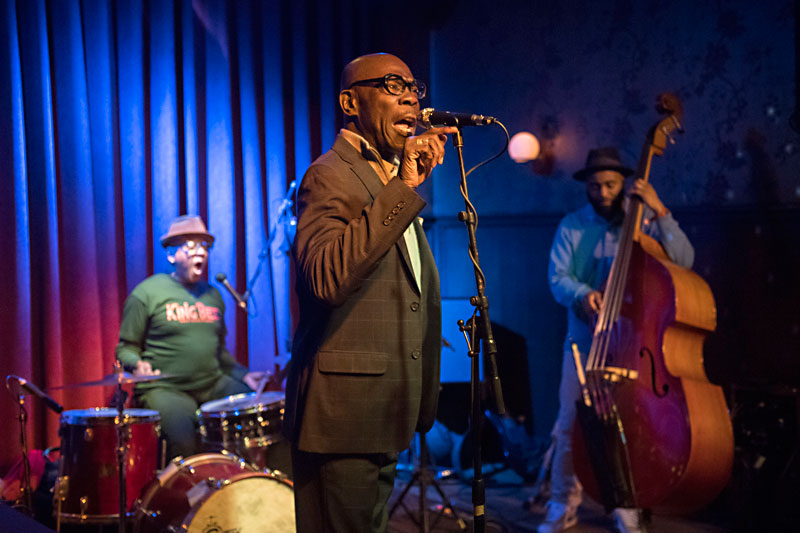 Walking to the club on a cold, rainy Tuesday, during yet another COVID spike, my expectations are as low as the January temperatures.

But upon entering the century-old remodeled house that is Half Step, the stresses of frigid weather and modern existence are vanquished by the warm atmosphere of yesteryear. With every seat filled, there are more people in here than the entire three-block stretch of Rainey Street.

It's 15 minutes before showtime and Mac Mcintosh has personally greeted half the room with a hug, handshake, or inside joke. His personality is, in its own way, the perfect opening act.

For eight years Austin jazz and blues devotees have known Mac as the dark, confident voice fronting the Michael Hale Trio every Tuesday at Half Step, but for over a decade I've known him affectionately as "Daddy Mac." We met at the erstwhile Legendary White Swan on 12th & Chicon where, every Monday, he'd come in to see the Little Elmore Reed Blues Band. Two steps in the door, he'd effortlessly have a glass of scotch in one hand, a dancing partner in the other, and the band would be calling him onstage to sing a song – a request he'd always be happy to oblige.

Mcintosh, a prodigious vocalist who didn't begin performing until he was in his 50s, eventually caught the attention of B3 maestro Mike Flanigin, who tapped him for regular singing duties at his Continental Gallery residency. It was there that he first connected with multitalented drummer Michael Hale, who'd been backing Austin soul-priestess Tameca Jones.

Though he'd never been in an actual band, Mcintosh felt a connection with Hale and asked if he'd be interested in forming a new group. What started as an attempt to resurrect the Great American Songbook soon flourished into an energetic and creative mix of music spanning the 20th century.

Hale's Trio, also consisting of bass player Jimmy Blazer and keyboardist Dayne Reliford, hit the ground running sharply at 9pm and waste no time in taking complete control of the room with a subtle yet assertive swing transcending restrictive labels such as jazz, blues, or rock.

This is just good music by good people.

Reliford spellbinds on the keys: instinctual, intelligent fingers imposing a hypnotic pace in which he becomes both the snake charmer and the serpent itself – controlling the threat, but ready to strike at any moment. Meanwhile, Blazer's mellow virtuosity perfectly nurtures each song by creating a balance around Hale's syncopated groove command. The three musicians disappear into each other's talents, scarcely making eye contact despite the complexity of arrangements. It's fantastic – and only going to get better.

"Ladies and gentlemen," announces Hale, "put your hands together for the one and only ... Mac Mcintosh!"

The thin frame of tonight's featured singer takes the stage, launching into Duke Ellington's genre-defining "It Don't Mean a Thing (If It Ain't Got That Swing)."

In a world increasingly reliant on DJs and Spotify playlists to cultivate ambience, this fourpiece manages to maintain freshness in the comparative antiquity of live music, breathing life into a smart selection of largely forgotten standards like Big Joe Turner's "Roll 'em Pete," Billie Holiday's "Good Morning Heartache," and the omni-hit "Fly Me to the Moon."

Just when you get comfortably nestled into a time gone by, Blazer flips from upright bass to his electric five-string and instantly modernizes the entire room.

This is jazz turned every which way but loose.

Without missing a beat, they seamlessly roll into the O'Jays' 1973 commercial monolith "For the Love of Money" – ("Money-money-money-monnneyyyy/ MUHNAY!") – and the invested audience sings along. This serves as a perfect bridge to one of their own creations, a playful call-and-response mash-up titled "My H-E-B Girl" in which Hale raps about a recurring late-night encounter with a beautiful stranger over the melody of Roberta Flack's "I Feel Like Making Love." The crowd buys in and follows Hale's direction to sing along.

Exercising expert showmanship and timing, the band moves to call it a night, but the audience won't have it. Mcintosh reclaims the mic for one more song and they cleverly dial it down with Judy Garland's signature "Somewhere Over the Rainbow." Not only does this perfectly summarize the musical trip to Oz and back that these fine musicians have just taken me on, it heartily reminds me that when you live in an incredible city like Austin, there truly is no place like home.