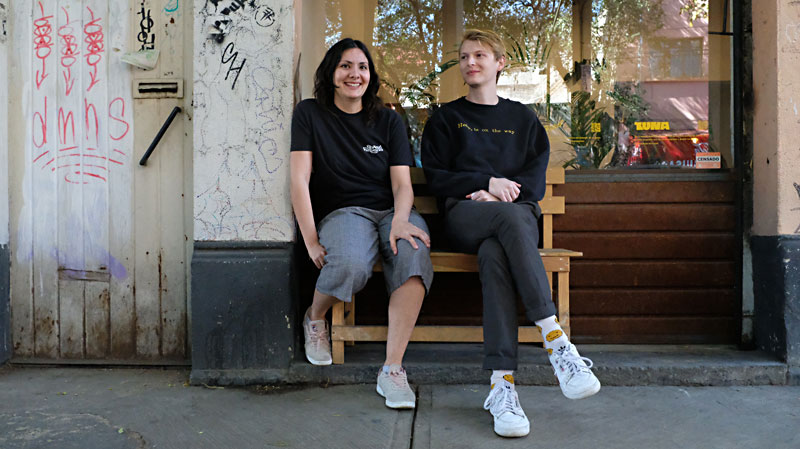 Atefeh Karabi just arrived in Mexico City, on a work trip of sorts for her underground internet radio station.

She's come to meet internet friends who have joined her Austin-based operation, Shared Frequencies Radio. The founder rattles off other global commitments: today, a spot on the CDMX's Radio Nopal; on Sunday, a Shared Frequencies collaboration with Hong Kong Community Radio.

"I am a globetrotter myself," says the Houston native during a call last week. "I travel, and I make these connections person-to-person, face-to-face. I give [artists] an opportunity and they take it. After that, it's really word of mouth. Making connections, maintaining it – it just works from there."

An established DJ based in Austin for the past few years, Marcos Cabral headlines the club's indoor laser pit. Karabi cites Cabral – a veteran of Boiler Room and the Lot Radio, a popular NYC player in internet radio – as a role model. Cabral tells the Chronicle: "Shared Frequencies helps develop a local scene, in a nutshell, by gathering like-minded people together."

Three years in, Karabi runs the station with UT graduate student Ben Randall, a multidisciplinary artist known as Pity Party, and a small team. The founder says their music branches off two genres – house and electronic.

The ongoing sixth season includes Austin Music Awards nominee DJ Shani among some 40 contributors, from Austin and beyond. The Shared Frequencies SoundCloud account archives all sets – a plus for Austin-based contributor Gabriel Frampton, aka Sriracha, who maxed out his own free SoundCloud uploads over decades of mixing. He digs through dusty boxes of forgotten CDs, and Bandcamp, for his expansive techno sets.

"I've been an obsessive music collector since 1995, and all of that knowledge has stayed with me, you know?" he says. "I didn't have too many people to share it with, other than my equally nerdy music friends who I would see a couple times a year. Getting a wider exposure through the radio station has been a really positive experience."

He also says Shared Frequencies sets are a great place for more abstract sounds not quite fitted for the clubs.

"I love dance music, but that's not all I listen to," he explains. "I listen to weird, abstract, sit-on-couch music too. Those can work really well together, if you know how to mix them right."

The station has collaborated with other local names in electronic, like Thank You For Sweating and FREQ! Karabi loves to stream live sets at venues and festivals, a great impetus for her globetrotting. She launched Shared Frequencies after moving back to Austin in 2019, unable to renew her visa while working at global-oriented Paris station Le Mellotron.

Prior, while studying at the University of Houston, Karabi became the first director that wasn't actually a student at Rice University's KTRU.

"Right after university, I moved to Europe," she recaps. "I saw that they were highlighting more underground radio, not college radio, but more independent stations. I'm trying my best to bring it to Austin. It's opening a door to the world, through the radio, for our artists."

Daniel Johnston, celebrated in the first-ever museum exhibition of the cult artist's work, earns a mural to accompany. On Saturday, Jan. 22, at 12:30pm, the Contemporary Austin unveils a new artwork on the side of the building, funded by Vans and local skate shop No-Comply. Fans are invited to join members of the late Texas songwriter's family at the ribbon cutting. The mural features colorful characters from Johnston's work, like the iconic frog-ish Jeremiah the Innocent and the ghostly Casper. Inside, the exhibit "Daniel Johnston: I Live My Broken Dreams" runs through March 20. And like many planned January events, the Hi, How Are You Project's Johnston-honoring HHAY Day has been postponed to May 4 at the Moody Theater (featuring Grouplove, Polyphonic Spree, Kate Davis, and more).

Jackie Venson opted to cancel upcoming Texas shows due to the surge in Omicron cases. The band offers a livestream show this Saturday, Jan. 22, at 9pm, with $5 tickets at jackievenson.bandcamp.com. Earlier this month, the Austin-based artist posted on social media that the Brauntex Theatre in New Braunfels "was unwilling to accommodate" requirements like proof of vaccination/testing. Last week, she pulled out of the Woodlands' Dosey Doe, writing, "Once again, a venue is forcing me to choose between playing shows and protecting the health and safety of my band, my crew and y'all."

The Austin Music Disaster Relief Grant, launched last year, reopens with $2.3 million in federal relief dollars. The program offers one-time $2,000 grants to local "professional musicians, independent promoters, and music industry workers facing hardships due to the economic impacts of the COVID-19 pandemic." Applications are open until Jan. 28 at 5pm. The city partners with the Long Center to distribute grants and with Texas Accountants and Lawyers for the Arts to help applicants. Find more eligibility info on our Daily Music blog.