Listen to This: Song Confessional Season 2

A novel concept, turning stranger's stories into songs, boils down to good music and good conversation 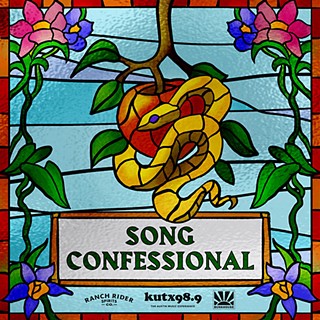 Where do songs come from? Often they're born of personal experiences, turned into poetry. Other times they seem to materialize out of thin air – a gift from the divine. My favorite local podcast flips the impetus of creation with musicians turning the stories of anonymous strangers into original songs.

Podcast hosts, musicians, and – for this purpose – high priests Walker Lukens and Zac Catanzaro drag a mobile confession booth to places interesting people congregate – like music festivals and hostels – and collect walk-up confessions. From those recordings, they select fantastic, funny, and emotionally moving stories and give them to a musical artist who quickly turns that confession into a song and records it locally with Spoon drummer and Public Hi-Fi studio operator/producer Jim Eno.

The resulting podcasts, having debuted in late 2019, begin with Lukens and Catanzaro musing upon the episode's theme, then they play the recording of the confession followed by the song it inspired. After that, Lukens sits down with Eno for an interview about the making of the track – going delightfully deep into the recording process – and then one of the hosts discusses the song with its creator.

Unlike Catholic confession, no absolution is offered – only entertainment. The show rides a novel concept that plays out in very human and artistically stimulating ways, but in a broad sense it comes down to many of our primary pastimes: good music and interesting conversation. I've listened to every episode and my girlfriend has accused the podcast, co-produced by KUTX, of being made specifically for people like me, so I was excited to preview a few episodes of Song Confessional season 2, which begin to roll out today on streaming services.

In one episode, a particularly eloquent confessor recounts being tour-guided by locals to a scary abandoned cabin in backwoods Virginia and finding a full-sized, hand-carved boat in the kitchen. Peculiarly, the home's owner – who'd apparently been killed by police – would build boats indoors ... then remove a wall of the cabin to get them out. That yarn's soon turned into an eerie and strikingly cinematic song by Austinites Kalu James and David Ramirez, capturing the darkness of her retelling.

Another installment centers around an extremely catchy and impressively penned song by the Missouri mother-and-son Americana duo Madisen Ward & the Mama Bear, hanging on the hook, "Baby can we skip to the good part?" The track's prompt: an older widow, who happens to also be a psychotherapist, detailing her comically woeful run of bad dates on eharmony – including a guy who was married to the ghost of a dead woman he'd never met in life.

And you won't want to miss episode 1, featuring Brooklyn dance punk mainstays !!! (chk chk chk), tasked with crafting a song around the confession of an AK-47-toting party animal who explains how a roll of film, shot to make his friend laugh, provoked a visit from the Secret Service. The ensuing interview with !!! singer Nic Offer not only provides entertaining analysis of the confessor but gives a glimpse into the veteran band's creative process amid a pandemic.