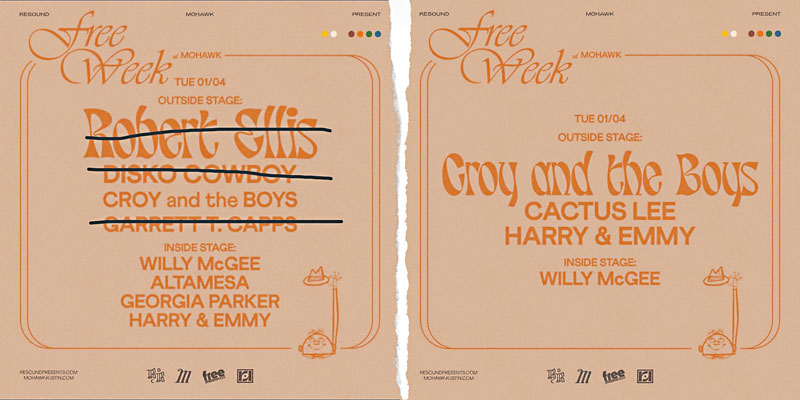 Last Sunday, Austin booker Trish Connelly tweeted out a concise statistic evaluating her upcoming week: "When you book 20 bands over the course of Free Week and come January 2nd, seven are left standing."

Seen daily on social media, bands have been dropped like flies off the posters of local gigs in recent weeks. Multiple New Year's Eve celebrations featured lineups cut in half – and others, such as a marquee billing with Spoon, John Doe Folk Trio, and Sweet Spirit, outright canceled. The city's return to Stage 4 COVID-19 risk guidelines, announced Dec. 29, also led to rollouts of stricter safety guidelines at a few music hubs.

At press time, a handful of shows had been canceled from both the Red River Cultural District's Free Week and Hotel Vegas' edition. The annual free-entry conglomeration of gigs continues this weekend at Mohawk, Stubb's, Empire, Cheer Up Charlies, Hotel Vegas, and beyond. Connelly, who booked multiple shows at Hotel Vegas, says bands cited exposure to COVID-19 or concern over playing the venue's indoor stage.

"That week between Christmas and New Year's Eve, a lot of bands said, 'Hey, I'm really sorry – I'm sick myself, the drummer is sick, or my roommate has caught COVID, so I have to wait to take a test,'" explains Connelly. "Very last minute, so many of these shows are dissolving. Bands are worried, which I totally do not blame them."

“The mark of success when you’re a club musician is a lot of people packed into tight quarters, and that’s exactly what you’re not supposed to be doing in a pandemic.” – Sweet Gary Newcomb

Connelly herself is precautious due to the impact of her multiple sclerosis treatment on her immune system. While she expects a slow January, she says bands are receptive to further-out spring bookings.

"It reminds me a lot of that spike we had in mid-July through August," says Connelly. "That was rough, but it didn't last forever. People were excited to play shows when it calmed down, so hopefully that's how this will be."

One of the canceled Hotel Vegas gigs was the recurring underground-punk Swass Nite, intended to host the third-ever performance by new act Fuck Money. Drummer Alton Jenkins, aka alton_usa, discussed concerns with members of headlining band Portrayal of Guilt.

"I didn't make the final call, but we deliberated for a while," says Jenkins. "If my friends are sick and my friends are who goes to my shows – I think it was the best thing to do. It just seemed hard to justify packing that little room right now."

Ashley Bradley, who books at the Ballroom (formerly known as Spider House), says she's working on moving upcoming shows to a newly renovated outdoor stage. She decided to cut the venue's New Year's Eve show due to multiple cases among artists.

"The very last straw was that my sound guy tested positive – I thought all signs pointed to canceling," she added.

The city's return to Stage 4 also brought back tightened safety guidelines at some major venues. For Free Week programming at the Mohawk, the venue applied safety policies set by show promoters Resound Presents requiring proof of either a negative PCR test obtained within 72 hours or full vaccination. Nearby at Empire Control Room & Garage, the venue implemented similar policies for all shows throughout January into "the foreseeable future," also recommending masks.

"We're reintroducing full precautions at all shows as a result of the Omicron variant," says Empire managing partner Stephen Sternschein. "[Previously,] we left it to the promoters and bands to decide what they were comfortable with. But now we're not doing that, because we felt like in Stage 4, everybody needs to follow these rules."

Like many in the Austin music industry, prolific multi-instrumentalist Gary Newcomb watched COVID-19 cases pick back up among gigging colleagues in late December. A few days before Christmas, he began feeling feverish and later tested positive. The pedal steel player and guitarist wound up in the hospital for a day of chest X-rays when his fever wouldn't break. 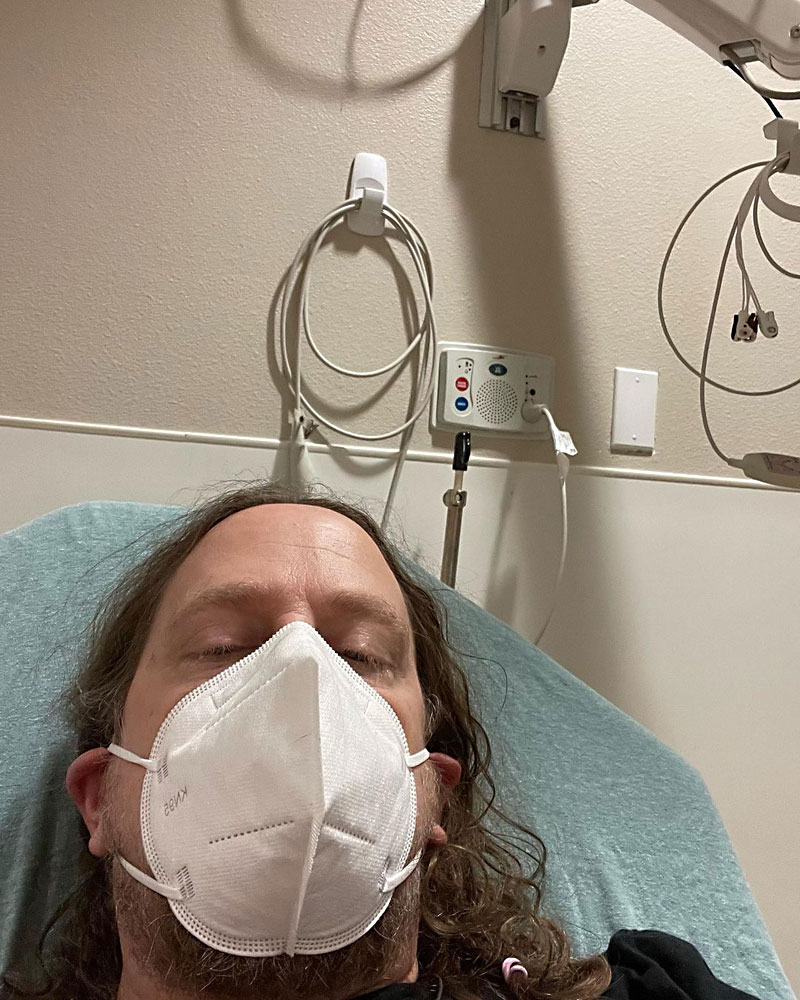 "The weeks before I got it, everybody was so busy – I played like 12 gigs in a row," recalls the Li'l Cap'n Travis member, known solo as Sweet Gary. "I play full time. As Omicron was showing up, me and a lot of my colleagues were just out in it. I remember having many conversations of, 'Yeah, I know this is a risk, but we can't not play.'

"Then when I got the virus – it was the most sick I've ever been. It was horrible."

Newcomb's wife Jenny Parrott, a longtime standard of Austin songwriting, also recovers from a rough bout with the virus – cause for extra concern as they're currently pregnant. Both musicians are fully vaccinated. The couple canceled a planned January tour promoting Parrott's November album The Fire I Saw.

"A lot of the clubs were like, 'Just hit me up when you're better,'" says Parrott, who hopes to soon return presiding every Friday, 5pm, at Hole in the Wall. "I hope so. I love touring so much. It keeps me excited about life, but it's just not the safe thing right now."

Awaiting a negative test, Newcomb also plans to join the Blake Whitmire Band, Tuesdays at the White Horse, as well as the Tender Things Thursdays at the Sagebrush and Leo Rondeau Fridays at Sam's Town Point. The busy sideman adds that he could "use some more stuff Saturdays."

"It's complicated," says Newcomb. "The mark of success when you're a club musician is a lot of people packed into tight quarters, and that's exactly what you're not supposed to be doing in a pandemic. You want people to come, but you feel a little weird about it."