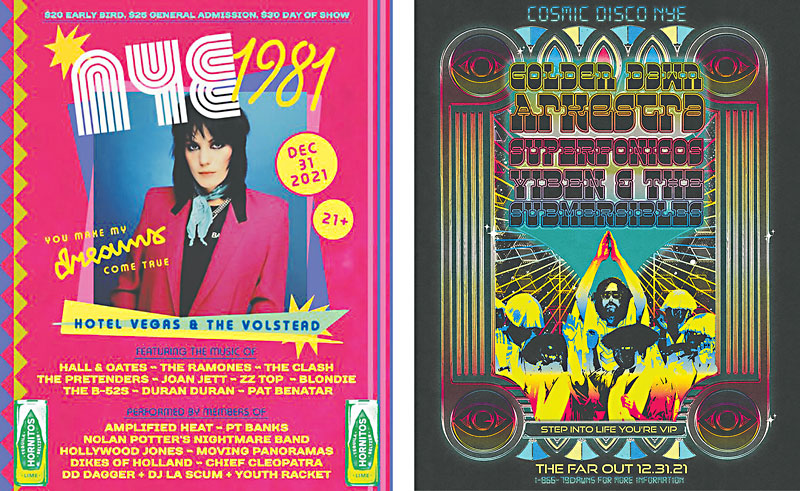 
Returning after a gap year, Hotel Vegas and Volstead Lounge crank up the time machine to pay tribute to artists from decades past. The 2019 edition saw a cast of mostly locals fêting icons from 1959 (Buddy Holly included, natch), while the year prior only dialed things back to 2001. This year travels back four decades to 1981, and features alter-ego sets paying tribute to luminaries Daryl Hall & John Oates, the Ramones, the Clash, the Pretenders, Blondie, Duran Duran, and more. Appearances to anticipate include Moving Panoramas members Leslie Sisson and Cara Tillman stepping into the shoes of Joan Jett and Pat Benatar, respectively; DD Dagger injecting their punk energy into the B-52's; and Amplified Heat tapping into Texas blues fire as ZZ Top. Also joining in will be troubadour PT Banks, with a voice once described in these pages as "a piercing arrow of warmth and melancholy," as well as soul-rock singer Chief Cleopatra, and members of psych troupe Nolan Potter's Nightmare Band. Lastly, members of garage punks Dikes of Holland will stop by; one of many bands detailed in 2013 documentary Mondo Fuzz, a film shot locally by Andy Ray Lemon, who will be sitting in as DJ Youth Racket alongside DJ sets from Hollywood Jones and LA Scum. – Greg Stitt


Formerly of jazz funkateers Snarky Puppy, singer/keyboardist Cory Henry has racked up work with everyone from Kanye West (with whom he earned an Album of the Year Grammy nom for Donda) and Bruce Springsteen to Kirk Franklin and Imagine Dragons. The Brooklynite's 21st century take on Seventies/Eighties sweet soul earned him another Grammy nod for Best Progressive R&B Album for last year's Something to Say and acclaim for this year's funky extravaganza Best of Me. Along with Dallas' RC & the Gritz, aka Erykah Badu musical director RC Williams and crew, no way this gig won't be a roof-raising, soul-stirring good time. – Michael Toland


Good news: Unlike their sold-out Mohawk gig back in July, you've got more than 24 hours' notice to get tickets to Spoon's NYE gig, where you can expect hits old and new. Even better news: Seating is still an option, and you'll go out on a high note with two additional sets of preeminent Austin music from pre-pandemic transplant John Doe's fledgling Folk Trio, as well as Merge Records signees Sweet Spirit, whose label debut plowed its way into the top 10 of Kevin Curtin's 2020 "Top 100 Austin Albums" list. – Greg Stitt


Grooves, grooves, grooves from a lysergic threesome of Austin bands that amass over 25 members and all put on a festival-ready show – which is another way to say it'd be fun to trip on mushrooms and dance. Apt for the concert's banner, psychedelic Afrobeat cirque Golden Dawn Arkestra continue to evolve their disco impulses with club-ready recent singles "Phenomenal" and "Success." Superfónicos shake down a bouncy Afro-Colombian funk sound infused with the distinct melodies of a gaita and vocals en español. All three bands feature saxophones, but Viben & the Submersibles lean into the instrument's sleekness with a keyboard-heavy progressive style dubbed "scuba funk." – Kevin Curtin


I'm surprised Spliff Kazoo even knows it's NYE, because he's always on "island time." His band, the self-proclaimed "#1 Tropical Western Lounge Act in Austin," performing in the spacious and sittable backyard of Kinda Tropical is an idyllic option for those wanting a chill-yet-entertaining New Year's experience. A Bermuda Triangle mind-trip of hilarious gags and delightful coconut twang tunes, the tiki crew represents a welcome scene for those who like the concept of Jimmy Buffett, but not the music, or those who want to say aloha to the stroke of midnight while in a slow conga line. – Kevin Curtin

A Parade of Tribute Acts

I don't need to explain this distinction, but – since I get paid by the word – I will: A "cover band" plays recognizable songs by a variety of artists, while a "tribute act" performs the material of one band. Neither should be confused with a musical "impersonator," who totally immerses themselves into the character of an entertainer like Elvis Presley, Madonna, or (for some reason) Wayne Newton.

The most artistically viable of these three sets is, in fact, the tribute act. It's a smart field to enter: Demand for corporate gigs mean they earn more than middling original bands and they also don't even have to write and record music. Going to see a tribute act on NYE is a solid move because they're fun and if you get drunk enough you might forget you're not seeing the genuine article. Here are three good ones. Name Creativity: A- (Is Byrne-ing Down the House taken?)

Additional Info: Austin act, largely embodying the Stop Making Sense concert film, hits their marks musically and goes full-spectacle with the dance choreography and lamp/oversized blazer elements. Andy Harn could be a nonunion stand-in for Byrne and sings even more like him.

Is the Real Act Dead?: Jerry Garcia died in 1995 and four of the Dead's keyboardists have perished, but three members still jam with John Mayer in Dead & Company.

Name Creativity: B- (On the index of GD tributes, lands soundly between the cringey Grapefruit Ed and Joe Russo's brilliant Almost Dead)

Name Creativity: B (Better than the alternative, Scary Monsters)

As the Turnpike Troubadours once presciently declared, "Cheap champagne don't dull the pain of ringing in the year," but two-stepping into 2022 might just be the auspicious cue to turn the page.

The Broken Spoke rolls into year 58 without legendary owner James White, who passed away this past January, but Alvin Crow has been spinning the Spoke for half a century. The legendary fiddler strings in the New Year at the classic honky-tonk holdout with the best dance floor repertoire in town.

The White Horse meanwhile caps its decade anniversary this month with hometown truth-slingers Croy & the Boys helping set resolutions with biting wit and countrified reworkings of political punk on this year's Of Course They Do EP. The Reeves Brothers and Silo Road set up the toast.

More room for moving may be available on the outskirts of town, and South Austin dive favorite Sam's Town Point wrangles regulars for a blowout with Ramsay Midwood's cosmic grooves, Rattlesnake Milk's psych-tinged country, and Cactus Lee setting up at their new home base. Driftwood's Mercer Dancehall hosts the twanged classic croon of Weldon Henson, who cut his 2021 live album there, alongside songwriter George Carver ($30).

To the northeast, Coupland Dancehall hosts the biggest bill to drop the ball with Kevin Fowler ($40). The Red Dirt country mainstay proves he can still get Loose, Loud & Crazy a quarter-century into his Texas chart-topping career, with Midland-native Braxton Keith opening behind his own rising Neon Dreams. – Doug Freeman