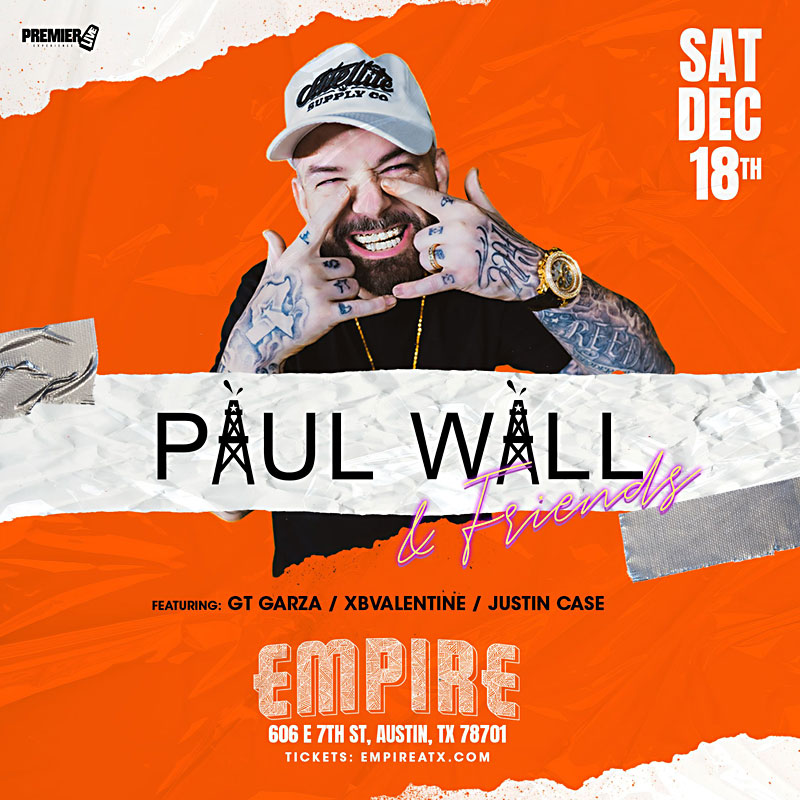 Ludacris may have been the one "doing a hundred on the highway," but in the early 2000s many hip-hop listeners were ceding the road to one Southern rapper above all others. Now as then, Paul Wall rhymes almost exclusively about zen and the art of car modification: tipped hydraulics, candy paint finishes, and subwoofer-shredding Screw tapes, with nary an expression of pity for any pedestrian blinded by the sunlight refracted from his signature $30,000 grillz.

And though the iceman's latest release, Hall of Fame Hustler, regrettably favors plain, undernourished, digitized trap beats over the lush sonic signatures of his classics – you miss the woozy organ vamps, burbling guitar washes, and clumsy, top-heavy drums – the trade-off is we now get to hear him rap about starting his car with his phone.

Subcompact though his subject matter may be, Wall's utterly unleaded Houston horsepower is key to his never-challenged status as, perhaps, the only white rapper to ever go platinum fully embodying his local scene. Ideally we'd be catching the "king of the parking lot" performing drive-in style from an authentic open-top slab – not least because a recent radio interview with 97.9 The Box revealed his lifelong distaste for deodorant – Saturday's Empire show does offer Wall the necessary trunk space to bring along lyrically inclined H-town hustler GT Garza and Georgetown's own xBValentine, who recently collab'd with Bone Thugs-N-Harmony.– Julian Towers


As guitarist and chief songwriter for Tommy Tutone, Jim Keller's halfway responsible for the most iconic seven digits of the Eighties: "867-5309." For the last three decades though, he's also been a notable music industry mystic – representing management and publishing concerns for heady acts like Philip Glass and Ravi Shankar. Along the way he's left a trail of solo records. February's By No Means, riding the guitar verve of David Hidalgo, inhabits Bob Dylan/Lou Reed territory with smokily poetic lyricism. Keller buddies up with ATX blue chippers Jonas Wilson, Sam Pankey, David Boyle, and Falcon Valdez for a free, intimate affair.– Kevin Curtin


The Elephant Room has struggled during the pandemic, reopening and re-closing a few times, but it's back in action with powerhouse bills like these. Friday features the Elias Haslanger Quintet, as the tenor saxophonist takes a break from Church On Monday duties to bop old school. A genre-hopper most at home with swinging improvisation, trumpeter Ephraim Owens brings his fivesome to the Saturday night slot. The weekend closes out with the Mitch Watkins Trio, as the titular guitar star – sideman to Leonard Cohen, Lyle Lovett, and more, as well as a leader in his own right – burns up his fretboard.– Michael Toland


It's become an Austin musical culture tradition, much like the old hoot nights and Titty Bingo stickers on your guitar case. For nine years now, ex-Krum Bums/current Kinetic Discord guitarist Trae Martinez has thrown a bunch of local punk musicians' names in a pile, then randomly drawn them into ad hoc bands, required to write and rehearse four original songs and one cover. These new bands-for-one-night then perform shortly before the holidays at this annual gathering, for the sake of sheer enjoyment.– Tim Stegall


Forecast: 'Twas the last Cumbia Night before Christmas and all through the house, not a band was boring, not even the DJ. Jump in the free dance lesson at 8:30pm, then practice as top-shelf Austin cumbia bands El Tule and El Combo Oscuro throw down the gauntlet. El Combo Oscuro's dark, twisted, psychedelic surf cumbia hints at Peruvian styles of the 1960s channeled through six Afro-Caribbean tropical devotees recombined from members of El Tule, Hard Proof, and Del Toros. El Tule themselves crowd the stage with jazzy, big band cumbia versatility. Chulita Vinyl Club DJ Raquiqui represents the Latina vinyl-only collective.– Christina Garcia


The memories are hazy, but the guitar line is crisp: Blair Howerton looks back on the Gulf Coast's muddy waters in "Galveston," Why Bonnie's wistful latest single. "Candyland beaches/ Water too salty to swim," she remembers, over Josh Malett's mellow beat. It all seems so vivid, but still, "It's slipping through my hand." It's the kind of song you bob your head to, even as it fills you with melancholia. Indie rockers Van Mary open for the dream-poppers on Tuesday – cool kids, get ready to cross your arms and nod along in the back.– Carys Anderson