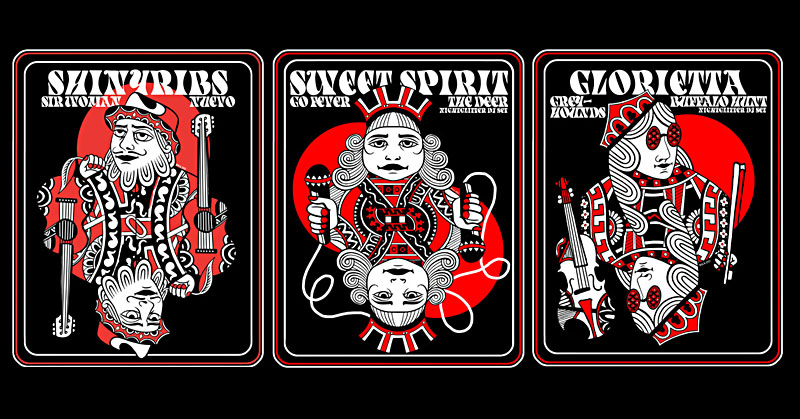 Weathering 15 years as an indie record label – no small feat in the first place. Then tack on surviving the hammer blow of the pandemic and it's no wonder Nine Mile Records founder Rick Pierik's counting his blessings.

"I couldn't be more grateful," says Pierik. "It's weird to reflect on that many years because when you're in the trenches, the time is just clicking by. I was on a freight train and, suddenly, the world stopped during the pandemic, and I had a chance to look out the window of the freight train and look at all the ground I'd covered, and I was kind of amazed at what it was. It has not been a straightforward path."

Along the way, Nine Mile's nurtured some of ATX's most exciting acts, nine of which will play at the label's three-night anniversary celebration at Empire.

Shinyribs anchors Friday's festivities alongside Sir Woman and Nuevo; Sweet Spirit, Go Fever, and the Deer join forces for Saturday; and Sunday's finale sees the reunion of local singer-songwriter supergroup Glorietta with support from Greyhounds and Buffalo Hunt. A hodgepodge of genres – involving punk to funk, folk to soul, pop to rock – but Pierik insists they share a commonality.

"The thing that excites me the most about music and musicians is performance," says Pierik. "Everyone playing this weekend is [playing] because I saw them live and I was just blown away."– David Brendan Hall


Glasshealer pulls up ready with a synth-pop syringe eager to inject the masses with a critical dose of neuropathic stimulation at the release show for But the Weight of Comfort Pulled Me Back Down, which maps out a Sega soundscape of surreal art-pop and straight-up dystopia. Holy Wave, meanwhile, unleashes the eerie pysch-pop soundwaves of 2014 classic Relax. Flora & Fawna pump out a precursory primer of spaced out sound to bust the style ride straight to Jupiter with thick distortions slathered over rave energy rhythm.– Mars Salazar


The White Horse's dance floor now bears one decade worth of boot scuffs and some of the East Sixth venue's perennial favorites are helping it mark the occasion: Tate Mayeux of local cosmic swamp duo Mayeux & Broussard defected for the East Coast, but will be returning home for the show. Continuing the White Horse's reputation as a favorite among locals and weekenders alike, the bill also includes Chicago jazz-country fusionists Dan Whitaker & the Shinebenders, plus East Texas native Vincent Neil Emerson, who'll no doubt play "White Horse Saloon": "I'm headed down to the White Horse Saloon/ I'm gonna drink my fill/ I got no time to kill."– Abby Johnston


Carll cut his teeth playing rowdy roughneck bars on the Gulf, which honed his whip-smart wit and disarming charm. Over the latter half of his two-decade career, though, the Texan has developed a more sincere side, folding in poignant ballads on fatherhood, divorce, new love, and growing older. Both sides of his songwriting light up this year's seventh LP, You Get It All, as Carll continues to brighten the Lone Star's musical horizon. His three-night stand at Antone's adds vagabond country rocker Jonathan Terrell, suave Latin-rhythmed Lisa Morales, and Wood & Wire's Tony Kamel as respective openers.– Doug Freeman


Pink Sweat$ is your best guy friend in high school: the shy kid who gets along with everybody, the big teddy bear who wraps his hands and heart in pink sweats. Born to a Philadelphia family who worshipped God and music – father a minister and mother a gospel singer – his signature hits, 2018's "Honesty" and 2021's "At My Worst," encapsulate the heartbreak and innocence of your early 20s. The songwriter/producer weaves yearning R&B with lighthearted dance tracks on February's full-length Pink Planet. Fellow crooners Kirby and Bren Joy kick off.– Clara Wang