BoomBaptist and the Art of Crafty Self Promotion Schemes 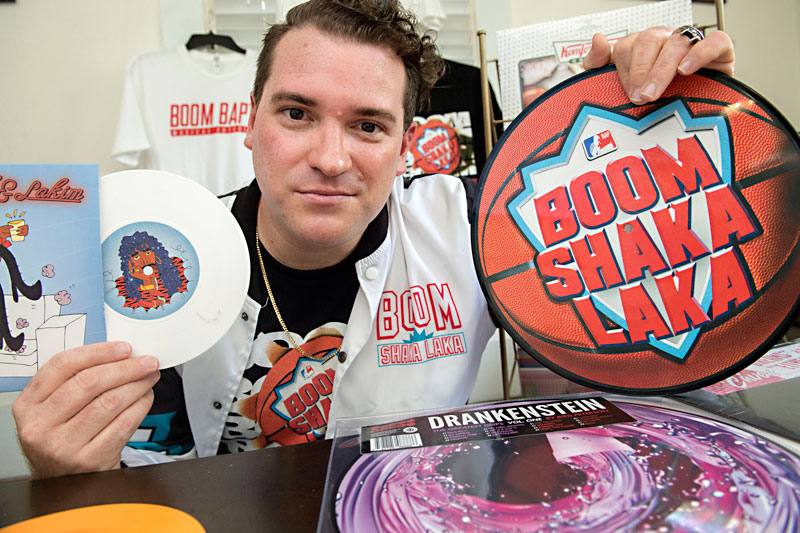 DJ PR-emier: Andrew Thaggard (aka BoomBaptist) shows off some of his promotional swag (Photo by John Anderson)

His hair slicked back in Macklemorian undercut, a camera flash reflected in every wide, sparkling grin (teeth noticeably unblemished by the glazed donuts placed before him on the table), Andrew Thaggard appeared for all the world the very image of press conference cool. But when one pointed question placed the Komfort Food CEO under a heat lamp, all that frosting melted in an instant. Reporters wanted to know: Were his sugar-filled confections giving Americans diabetes?

"THIS IS ALL JUST A CONSPIRACY AGAINST SMALL BUSINESSES," Thaggard roared, knocking away the coffee mug he'd slurped from just moments earlier, revealing it to be as empty as his product's calories. Rather than surrender his corporate credibility, the CEO doubled down with smarmy salesman charm: "There is something in those donuts ... the love we put in."

When Thaggard spread the satirical video across his social media channels in February, onlookers could be forgiven for not grasping the true capitalist magic trick on display – one that had less to do with mounting lbs than it did with moving LPs.

Though technically a CEO – overseeing the delectably named Cream Dream Records – Thaggard's no pastry impresario. He's BoomBaptist: an independent hip-hop producer, occasional MC, one-half of synthwave duo the Vapor Caves (the other member is his fiancée), and something of a music marketing chaos agent. Besides the fake donut franchize – cheekily tied to a beat-tape tribute to J Dilla – he's promoted records with a fake real estate company, a fake pivot into mail-order cannabis, and an NBA Jam game so intricately fake it's actually real.

"Whenever he talks about anything happening with him now I'm just like, 'I don't know if I believe you?'" laughs local promoter Avi Minkoff. "Am I happy for you? Am I upset? Or am I just waiting to get hit with a punchline?"

So what's Thaggard's agenda? Is he just an insincere opportunist, cynically gaming the internet?

"Yeah I'll get press, I'll get new fans, but I'll also lose some people who thought I was serious about joining the NBA or got duped by my fake real estate," Thaggard admits – a tight knot of exhausted frustration caught in his earnest, puppy-dog voice, "It's hard to deal with a prank if you feel there's no reason, that it's a troll for attention." 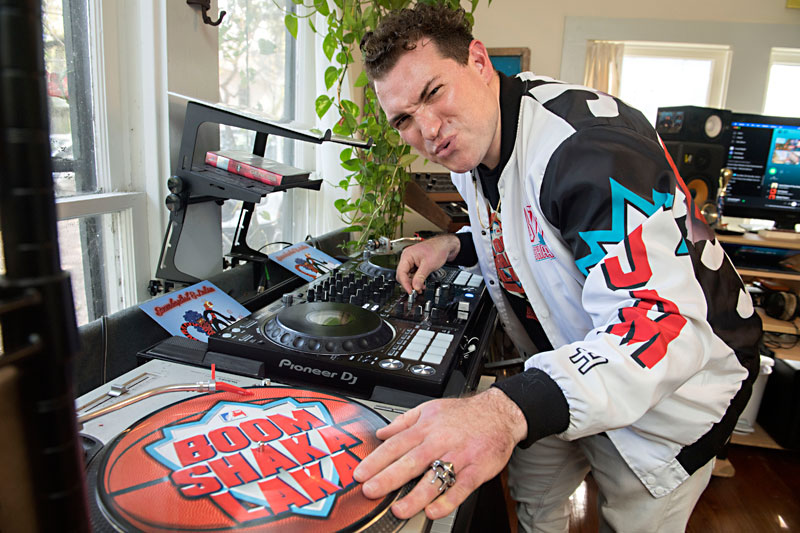 But ask Thaggard to break down each project and he can justify his intentions right down to the vinyl coloring. To call his a "skill at packaging" would be to miss the point. What he really does is unify, frequently crafting an album rollout to broach a serious concern – about gentrification, consumerism, world health – that'll reframe its carefree product as sarcastic counterpoint. The luxury soundtrack to a world gone mad.

"He'll never be like, 'Oh, haha, wouldn't this be random,'" says Yadira Brown, Thaggard's partner – musical and otherwise – since 2013. "He'll dissect his songs, find that concept, and think of the million ways the meaning can be spread."

"Being an independent – and someone who makes instrumental music – it's a constant struggle to represent myself correctly," Thaggard insists. "Learning to create characters, create the world of the album, it gave me that control."

Foremost among those characters may just be BoomBaptist himself. Thaggard summarizes his DJ/marketman persona as "pure bravado," but that's far from the humble truth of the man himself – a 36-year-old fledgling realtor with "chains hidden beneath [his] collared shirts," who spent the better part of the 2010s installing arcade games.

"Every dollar he makes, it all goes back into the next project," says Minkoff, who also took time from our interview to request Thaggard return the turntables he borrowed a decade ago. "I literally just bought your record, and because you have my turntables, I have no way of listening to it."

True to frugal form, within 20 minutes of being interviewed, Thaggard was sharing tales of DJ sets paid for in cheeseburgers, and owning up, sheepishly, to his predilection for cheap bootleg sneakers.

"You go on this guy's website, and so the authorities don't catch him when it goes through customs, you technically are buying a bra," Thaggard details, "but I'm getting the highest quality, completely fake Jordans."

Not only is Thaggard a true hip-hop hustler, he's playing the part. It took time to learn.

The son of a classical pianist mother, born amidst the cuatro strings of Venezuela en route to a Miami-funk upbringing, Thaggard is described by all his associates as an innate musical "prodigy." Though shaped by explorations in jazz bands and salsa groups, his talents were called to hip-hop by the youthful wonder he felt at the "world-building" abilities of its classic beatmakers.

But when Thaggard began developing production prowess of his own, it was always with a mind toward serving his personal rhyme book (MC handle: Thesaurus Rex). Alas, despite years hustling through circuits in Boulder and Denver, rap superstardom lingered perpetually out of reach of Thesaurus's pathetically tiny T. rex arms. Shopping beats proved no surer a bet – his efforts reaching an especially humiliating low point when Thaggard found himself defrauded by a fake MF Doom connect.

"I had delusions of grandeur, thinking that one song placement or one feature would save me," Thaggard says. "Getting burned over and over taught me self-reliance." 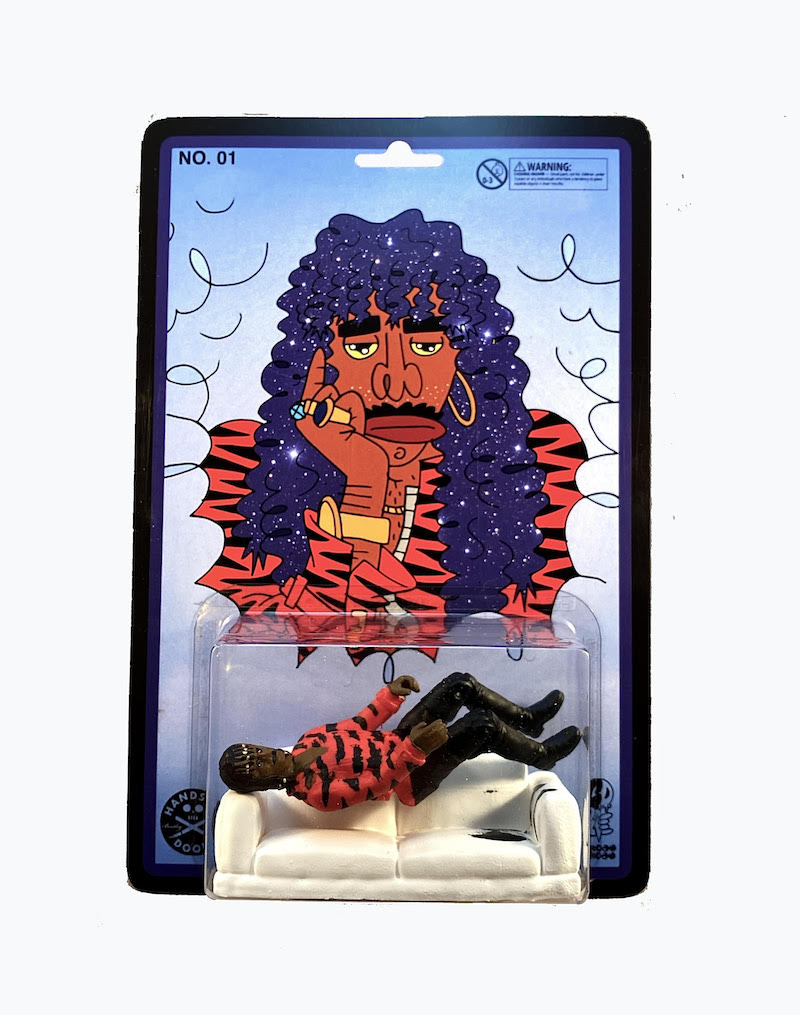 Thaggard cites legendary Gang Starr affiliate Bumpy Knuckles as the first person who told him his beats could stand on their own as full projects and, shortly after moving to Austin in 2009, he received similar encouragement (and label backing) from Webster. Still, it wasn't until 2019, when conceptualizing the first Vapor Caves LP with Brown first activated his marketing knack, that Thaggard really believed it for himself. Nearly all the material the musician's put out since is work he sat on for much of the decade – including brand-new Lakim split "I'm Rick James, Bitch" / "Jerry Mane," for which they already sold out custom Rick James "Fuck Your Couch" action figures – their release attributable to a late-breaking creative boom that shows no sign of slowing.

"He's only going farther up from here, the more confidence that he has in these crazy schemes. BoomBaptist is a whole character now and you enjoy the marketer equal with the music," says Minkoff. "He'll rob your house, sell the stuff back to you, and then you'll tip him anyway cause you're like, 'Oh, man, this guy's great.'"