Beaumonster: A Memoir by Jesse Dayton

Any of Dayton's current or former Facebook friends should hardly be surprised that Beaumonster, his debut memoir, reads like one of his online rants – at 256 pages, it's much longer – but it's not a collection of those deliciously unfiltered treatises about life, politics, music, and culture, lashed with his hilariously broad Golden Triangle wit. Those familiar with Dayton know he skids his Noconas across the dance floor to a wholly idiosyncratic internal rhythm. This is the guy, after all, whose Mixtape Vol. 1 covers album converted the Clash's reggae groover "Bankrobber" into a Bobby Fuller Four-style West Texas rocker, the way The Only Band That Matters hot-rodded the latter's "I Fought The Law" into a Clash City Rocker. So you know he's hardly writing anything hewing too closely to conventional ideas of a memoir.

Basically, despite autobiographical elements, Dayton's written his take on John F. Kennedy's Profiles in Courage, or A.B. Spellman's Four Lives in the Bebop Business. Sure, along the way we get his insights into his "radical centrist" politics, which have chased away his conservative and hard- rightist fans over time, with nary a droplet of sweat dripping from his brow. As far as he's concerned, "[t]he goalpost has been moved so far from the middle ... that by today's standards, a true conservative and icon of the Republican Party like Barry Goldwater would be considered a 'liberal.'"

But that's merely the book's potatoes, or gravy. The meat of Beaumonster lies in his portraits of the myriad people he's encountered across his exceptional career, and the lessons he learned from each. It could be philosophical, it could be spiritual, it could be artistic – Dayton acquired some degree of knowledge from everyone he met or worked with. Doug Sahm taught him the benefits of having "zero musical boundaries": "He would break into a Gulf Coast swamp-pop song in 6/8, then a hard core Texas honky-tonk shuffle song, then rock the crowd with one of his high-energy Tex-Mex San Antonio-style rock 'n' roll songs. Musical styles were only a tool for Doug to get at the truth." Willie struck him as "a wise-old survivor" with a "Dalai Lama-esque approach to life." Kris Kristofferson was a poet on a par with any literary great who "also happens to be a movie star." Cash, by the time Dayton met him, was a "humble and gracious man who made me think about working on myself." Jennings was "part Elvis, part outlaw Josey Wales, part the wildest horse even the most experienced ol' cowboy could never tame." Except time had tempered ol' Waylon's spirit, though "you still felt like that side of him might show itself at any minute." Social Distortion's Mike Ness served as an example in how he "ate and took care of himself and his family," while Rob Zombie inspired Dayton to make his own movie. Dayton takes what he can from each, while drowning out the internal doubt he refers to as "the Shitty Committee." We could all learn from Jesse Dayton.

And the book has a soundtrack album! Practically Mixtape Vol. 2, Beaumonster the CD sees Dayton interpret 10 greats from the greats he chronicles in Beaumonster the book. Which means X's "Burning House of Love" becomes "Johnny and June Hillbilly," while the Supersuckers' "Born With a Tail" goes bluegrass! They rest alongside Townes Van Zandt's "White Freightliner Blues," as they should in any good record collection. 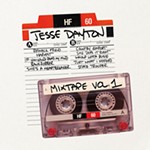 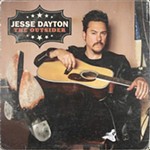