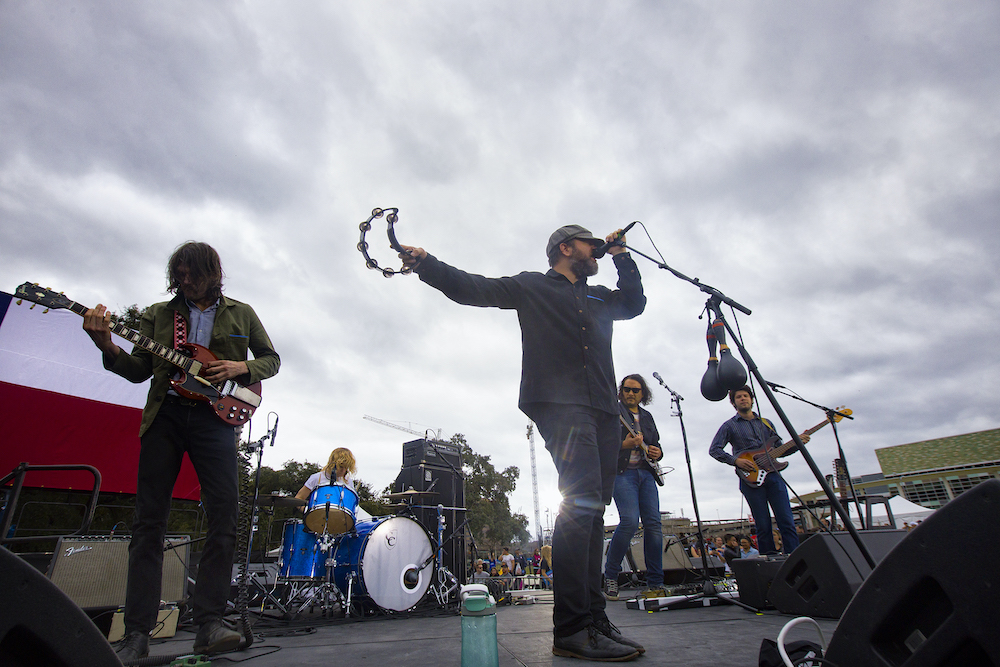 with A Place to Bury Strangers, Ringo Deathstarr, and Ami Dang
Stubb’s, Friday 29


If a Levitation set is toplined by festival founders the Black Angels, the lineup features like-minded acts that recall the spirit of the original Austin Psych Fest. With longtime stalwarts Elephant Stone absent, Baltimore sitarist and composer Ami Dang steps into the Indian/North American vacancy with her meditative, electronica-tinged version of acid ambience. Perennial ATX power trio Ringo Deathstarr brings the noise with their aggressive, Detroit-style attack on British shoegaze via last year's self-titled bruiser. New York's A Place to Bury Strangers tends to blow up any stage it strides, and since its noise rocking gothic New Wave is in top gear on new EP Hologram, this year should be no different. Beloved Tokyo quintet Kikagaku Moyo played the festival at the last edition two years ago, but it doesn't tour the States much – therefore any chance to see the band's folky, sitar-laced trance rock should be taken. Austin's finest psych rockers finish off their own party with what's likely to be a retrospective set – after all, the band hasn't released any new music since 2017, and its latest album Live at Levitation recaps its history of festival performances anyway. As eclectic as Levitation has gotten over the past decade, the Angels bill counts as meat-and-potatoes, but it's also a reminder of the music on which this festival was built. – Michael Toland


Like a blade of grass sprouting through the sidewalk, Reagan-era ATX post-punk on Red River signals life after pandemic death. Flexing new full-length Over and Over and Over Again, ST 37 discharges the opening title-track-come-CBGB-firestarter, floats 14-minute meteor-impact cloud "Observing Dust," and mic drops intergalactic glaze on "Flea Udder." Of direct support the Gary, wrote the Chronicle in March of EP Fallow: "Dormant since 2014, the Austin hydroelectric trio generates a hard, flat, Eighties post-punk sound, a tangle and tumble of singer/bassist Dave Norwood, axeman Trey Pool, and new Anthony Castaneda." Plastique and Pfisters pile on. – Raoul Hernandez


Pakistani vocalist, composer, and producer Arooj Aftab transcends genre, pulling centuries-old ghazals into the modern age with her innovative collaborations and velvety voice. The 36-year-old's April effort Vulture Prince harnesses the power of ancient South Asian music and poetry meant to pull one toward God, though she forgoes traditional instrumentation in favor of minimalist orchestral arrangements, which concentrates the power of her singing – interweaving feelings of solace and longing. Join Aftab on an emotional journey as she performs with bassist Shahzad Ismaily and Harvard professor/pianist Vijay Iyer. – Clara Wang


The poet laureate of abstract rap, now in his fifth decade on the mic, arrives on the heels of Keith's Salon, an unremarkable LP filled with descriptions of a lavish, oversexed lifestyle and C- grade hooks. Still, he's hereby awarded 10 Texas points for shoehorning an Earl Campbell reference into "Yachts." Recent output aside, Kool Keith remains an elite Halloween option for his back catalogue of personas – Dr. Octagonecologyst, Black Elvis, and Dr. Dooom – all of which monopolize his set list, also including material from Eighties combo Ultamagnetic MCs. Mob early for heady locals: Chucky Blk, the Point, DJ ConSafos, and DJ Raquiqui. – Kevin Curtin