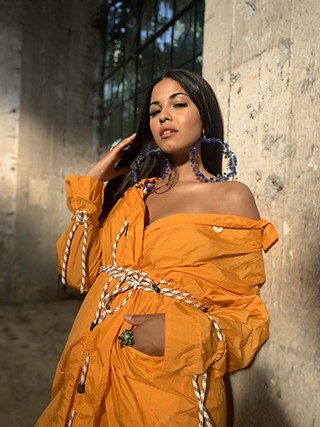 Uninhibited by genre labels, Dominican Italian singer-songwriter Yendry possesses a broad musical palette that plucks from island music, reggaeton, trap, merengue, and R&B – all coalescing into a pop sound tailored to this singer's gentle voice and penchant for emotional themes.

She's in Miami wrapping a collaboration with Colombian reggaeton superstar J Balvin when we talk via WhatsApp, and graciously answers questions about the magical influences on her life and the poetry that inspires her music.

Discovered on the Italian X Factor in 2012, Yendry's string of solo EPs mixes genres like trap and flamenco, à la Rosalía, especially in "Barrio," a song about domestic abuse.

"I feel like that was a topic we don't often talk about in music, especially in the Latin culture," says the Latina, who wants to throw light on domestic violence to help survivors and their loved ones.

The "Barrio" video, with Yendry's glowing eyes and levitating body, feels supernatural. Does Yendry believe in or practice magic? Her family believes, especially in rituals to protect luck. Her mother doesn't allow purses on the bed, for example, because it's bad luck, but Yendry carries only one charm – belief in a special protection she was born with. Her mother assured the girl that the protection was one they both carried, and would guard them.

"That gave me more courage to approach life," says the 28-year-old.

Stateside for a few months, her father's place in the New York City Dominican community feels like a second home, but the United States itself still feels like a movie for Yendry, whose ACL Fest performance will be her first Texas visit. For her show, she plans different live versions of her songs, which she loves hearing when she is in an audience for other artists. She'll bring "an old-school concert vibe" of herself and a band, but with "really big fat basslines and big kicks" – her heritage as a European.

She's set a goal ("I used to call them dreams, now I call them goals") to release her first LP by the end of the year, and she's trying to make sure she stays balanced too, instead of becoming a workaholic. Reading helps to unwind, and the Mexican poet Samuel Noyola, whose work she picked up on a recent trip to Mexico City, has become a favorite. Poems help put new images in her mind, she says, and in a creative mental space. Other literary favorites? Dominican American poet/novelist Elizabeth Acevedo and Nigerian writer Chimamanda Ngozi Adichie.