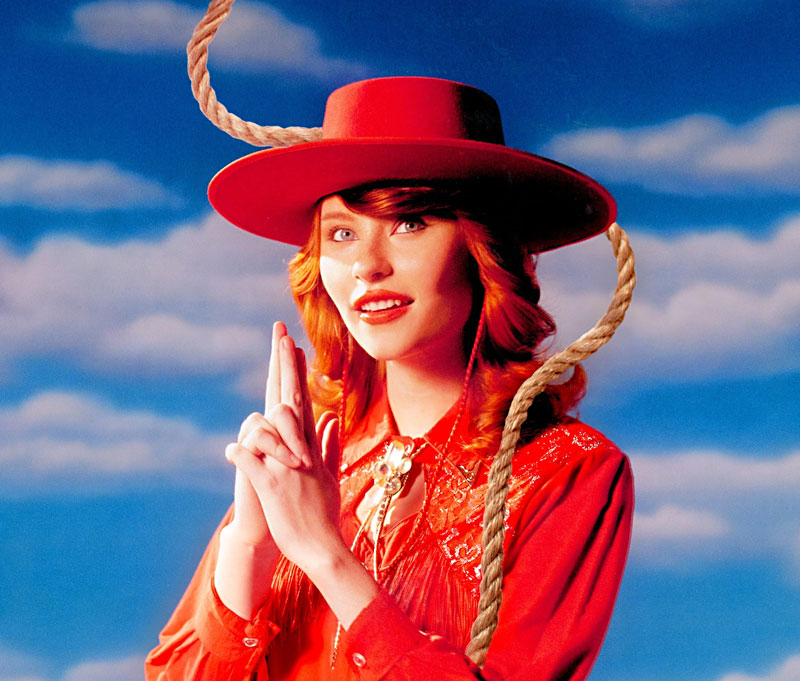 
As definitive proof as any that hip-hop rules the world, Maidza (birth name Takudzwa Victoria Rosa Maidza) is a Zimbabwe-born, Australia-raised genre smasher whose career has slow-boiled for going on a decade. The stutter-funk of last year's "Shook" turned heads and blew out eardrums all over the place, emphasizing Maidza's confident and able flow and recalling the heydays of world-hopper M.I.A. without sounding beholden to those who came before her. The lyrical showoffs continue on her latest EP, the third round of her (understatement alert!) Last Year Was Weird trilogy. The funk of "Syrup" positively oozes out of the speakers as Maidza drawls out her desire that "I just wanna be... rich... thick... sweet... sick," with "Kim" roughly doubling the BPM and flow velocity without a slip. And when Maidza turns to singing on ethereal, languid tracks like "Cashmere," you can finally grasp the thinking that caused indie stalwarts 4AD to make her one of their most adventurous signings in years.– Chad Swiatecki


First off, I heard the off-the-wall delight of last year's "Photo ID." Then, I followed the Technicolor rollout of stellar summer 2021 singles packing unexpected funk-pop production, wonderfully chaotic videos, and fantastic Elton John-level sartorial choices – and I was completely won over by 25-year-old Californian Remi Wolf. There are many rising heavyweight voices of indie exuberance on the ACL lineup, like Girl in Red and Claud and Dayglow, but former American Idol contestant Wolf presents my great kaleidoscopic hope. (The New York Times and The Guardian endorse her as a "superstar-in-waiting.") Fearless vocal feats flip-flopping between raps and belt-outs enunciate countless strange exclamations. Try the chorus of "Long hair, long beard, turtleneck sweater" on jazz-warped "Grumpy Old Man," or blown-out "Ain't no Chuck E. Cheese in Los Feliz" on new romp "Quiet on Set." All culminates in debut album Juno, named after her dog, due Oct. 15 on Island Records.– Rachel Rascoe


"It took New York to make me a cowboy," admits Allison Ponthier in opening her debut EP, this summer's Faking My Own Death. The collection serves as the culmination of a journey from the Dallas suburbs and commencement of the songwriter's much anticipated step out since turning heads with Lord Huron on dreamy duet "I Lied." Ponthier's vocals swoon both subtle and supple, aiming at the intersection between Lana Del Rey and Kacey Musgraves, and her poignant confessionals wring anxiety and dreams with a delicate want in her searching. The touches of pop linger in a swaying haze that cabarets her country- leaning melodies, resulting in the kind of surreal Western pop that swells the sense of dislocation and uncertainty while beckoning warmly to follow.– Doug Freeman


Kenneth La'ron Beasley, stage moniker KennyHoopla, began his journey into music with no background in his craft, but with an unmistakable will to be heard. As the 24-year-old continues to track down his voice, the Wisconsin singer moved from electronica-infused How Will I Rest in Peace if I'm Buried by a Highway? (2020) into eccentric bangers for his debut full-length Survivors Guilt: The Mixtape. A genre shapeshifter in his own right, Beasley's discography flows from relaxing New Wave to tight rock riffage and outgoing vocal intricacies. Ushering in the next era of pop-punk, Beasley takes inspiration from hip-hop and rock – previously working heavily with Blink-182 drummer Travis Barker – to transform space into sonic explorations using slick harmonies and tantalizing hooks. Known for his uninhibited performances, doing backflips off the stage and cannonballing into the mosh pit, expect the rising star's premiere ACL Fest sets to be as wild as his tracks.– Alyssa Quiles


This modern age, in which the highlights of a Kanye West album are its guest features, brought 070 Shake to the forefront. "I put my hand on the stove to see if I still bleed/ And nothing hurts anymore, I feel kind of free," she sang on "Ghost Town," the best track off West's 2018 offering, Ye. Stealing the show with that verse turned ears to the young New Jersey native, whose work on the infamous Wyoming sessions also yielded spots on Pusha T's Daytona.

The singer, aka Danielle Balbuena, had already demonstrated her ability to carve out unique hooks with 2016 single "Honey," where her intense, rhythmic delivery seems to emanate straight from her chest. 2020 debut LP Modus Vivendi continued to synthesize an emotionally striking sound that involves rap, R&B, and sad pop, while turning out infectious choruses on cuts like "Morrow" and "Guilty Conscious." Meanwhile, 070 Shake's pleading tone also materialized on DJ Khaled's "Holy Mountain," holding her own with Jamaican vocal greats Buju Banton, Sizzla, and Mavado. Look forward to the visceral energy she brings onstage.– Kevin Curtin


It's not just the viciously energetic attack Marc Rebillet throws into his loop-based music, the way he shifts from sultry and soulful coos to shouting, barking vocals, usually improvised live. The classically trained pianist and theatrically trained shapeshifter spontaneously creates an interactive performance with audience feedback and suggestions, coaxing slinky bedtime rhythms before shifting to dance music and back again. He utilizes shakers, keyboard, his own wild screams, and often over-the-top lyrics about sex and smut that amp his audience up with a playful permission to be as silly as you wanna be. Undies, bathrobe, and loafers: his preferred stage getup, while fans echo the look in kimonos and robes. He's earned the respect of his idols – people like Reggie Watts (his most oft-cited inspiration) and Flying Lotus – and has collaborated with fellow Dallas native Erykah Badu. He found fame on YouTube and Twitch over the pandemic, but came up in front of live audiences he's eager to get back to. Rebillet has said that when he can't keep the performance fresh anymore, he'll hang it up and try another art form. Don't miss the man while he's still got it.– Christina Garcia