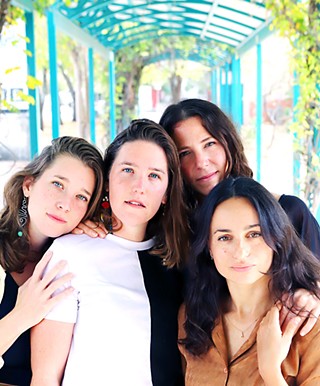 
Though landmark noise rock trio Unsane retired, a nascent reissue program has prompted occasional shows. With the blessings of former rhythm section Dave Curran and Vincent Signorelli, guitarist/shouter Chris Spencer convenes like-minded bassist Eric Cooper (Made Out of Babies, Bad Powers) and drummer Jon Syverson (Daughters) to celebrate the release of long-lost original Unsane recordings, as Improvised Munitions & Demo, for a show in Austin, one of the band's touring strongholds. Our own Exhalants, probably the best of Unsane's disciples thanks to their passion for pushing that sound forward, join in. Dining With Dogs opens. Bring earplugs and your current frustrations. – Michael Toland


This lineup has everything: breezy alt-rock, sweet and slow country, punk of the noise and pop varieties. A. Sinclair shimmers with melodic rock zen, Warm Sugar drawls harmoniously with pedal steel, the Gospel Truth blends saxophone squall and guitar bite, and punchy quartet Lola Tried surfs on choppy melodies. The show doubles as an EP release party for the latter, who unveil their first effort in three years. If 2018's kiss-with-a-fist self-titled is any indication ("I wish I let my friends think that I'm dead," goes claustrophobic closer "Room"), come vaxxed and expect sharp hooks and a wicked sense of humor. – Carys Anderson


Fayetteville, Ark., native Nick Shoulders' yodeling voice echoes with nostalgia and haunting complexity like the forgotten rocky hollers he comes from. The prolific songwriter first established himself playing with bands like Thunderlizards and Shawn James & the Shapeshifters in the early 2010s before finding wider success with his solo work, earnestly evoking country before the genre took brand advertising too seriously with raucous, clever songs like "Rather Low" and "Snakes and Waterfalls." There's nothing wrong with Miller Lite or Georgia pickup trucks in easy-to-sing C-chords, but Shoulders reminds us that country is far deeper than generic white Americana. Big Cedar Fever and South Texas Tweek open. – Clara Wang

Stateside at the Paramount, Sunday 12


Trumpeter Jeff Lofton's Miles Davis passion is no secret – the veteran ATX jazz musician has done shows based around the music titan's pioneering work before. Unlike many elites who sing the praises of only the Sixties acoustic sounds, Lofton celebrates the electric work of In a Silent Way and Bitches Brew just as often. Lofton's Electric Thang brings back Chasing the Voodoo Down, a show dedicated to Davis' wildly influential music from that era. Few herald the strange, uncompromising, and insidiously compelling sonic storms on those records, so hearing them live will be a treat. – Michael Toland