Faster Than Sound: You Might Find Your New Favorite Artist at Hot Summer Nights – Here Are 10 Contenders Felt Out (Photo by Jana Birchum)

Brains at-capacity with concerns of medical, societal, and environmental demise, the past year called for potato-chip listening. After repeat snacking on easy, comforting sounds, I've made an effort this summer to open my brain back up to the new and beautifully unfamiliar. Luckily, locally sourced Hot Summer Nights, after a year off, provides the perfect opportunity to play a lineup game of "who don't I recognize?"

Delayed from its typical post in July, the free admission multi-venue collaboration presents over 100 options across a dozen Red River Cultural District venues this Thursday through Sunday. Consider the following 10 Austin-based contenders for your new favorite artist.

Tears – whether shed on the dance floor or bathroom floor – fuel the dark melodrama of singer-songwriter Sobbrs' stormy, precisely calibrated synth-pop. Also adept at cleverly understating hits, he's mashed Sky Ferreira with Solange ("Everything Is Embarrassing / Losing You") and green-screened Caroline Polachek's "So Hot You're Hurting My Feelings."

Glitchy, dreamy, sample-based – Spellwrks elegantly entered that hip-hop-neighboring niche of beat makers with 2015 LP Super Chill. Opening up to soul and funk, the producer writes new Mind Gems Vol. 4 "pairs best with some trees and a loud set of headphones."

In a world primed for Spanish-integrating pop-R&B by stars like Rosalía and Kali Uchis, enter the bold beats and spacious sonics of Shiela, who drew on Mexican and Nicaraguan roots in playful debut Chilita. Preview hand-clapping "Yo Te Quise" ahead of her ACL Fest launch.

Driven by a charismatic cadence and devotion to unexpected flourishes under the umbrella of alternative R&B, Texas native Jonny Jukebox shines on a recent run of colorful singles. Find lovesick trap on "BetterThanDrugs" and anti-Insta-stalking anthem "Troll Patrol" with the Teeta. "Went away for a while/ to work on a future/ kept my words and wrote them," recaps Grace Sorensen on velvety-smooth "Attraction." Synergy of the teen singer-songwriter's buoyant, gorgeous vocal elegance and Blue October bassist Matt Noveskey's production hasn't missed yet.

Airy, entrancing, and full of movement, it's no surprise the electroacoustic soundscapes of Sowmya Somanath and Walter Nichols continue to evolve. After debut Superfluid as Emme, the textural, transcendental duo celebrates a name change with new B-sides from the 2019 album. "Timelapse" collages conversation and synth.

Raised on the Eastside and recognized for years of artfully candid lines with Mindz of a Different Kind, you should know Austin emcee Blakchyl by now. Catch up with lush, intimate 2020 LP H02D and latest unpretentious skill display "Back At It" with JelloMauri.

Saturday evening ahead of Gary Clark Jr. at the Moody Amphitheater, Kydd Jones' guitarist caught notice for playing behind his head, as well as with his tongue (later specified on Twitter). Hear more from the shredder/songwriter on Jones' bluesy "James Baldwin." 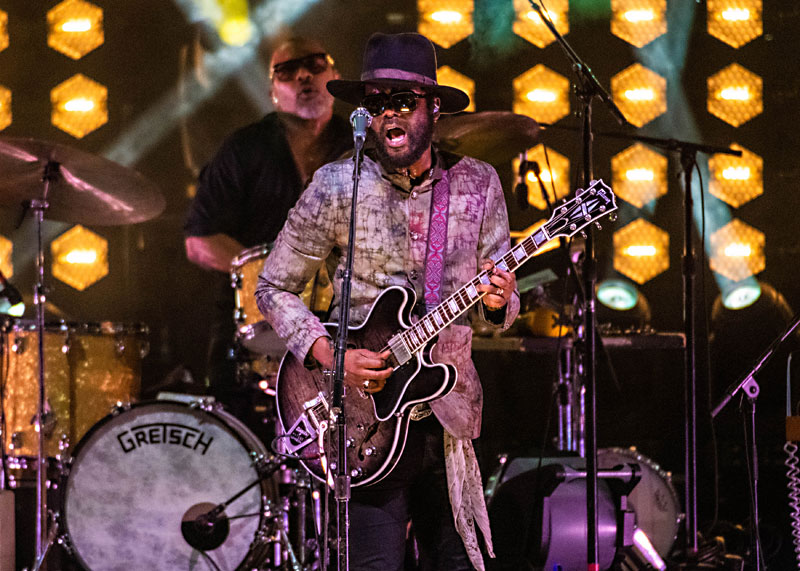 Public greenspace by day and 5,000-capacity venue by night, the well-designed puzzle pieces of Waterloo Park fell together impressively for last Friday's debut of the Moody Amphitheater. Chairs lined the lawn, lights and speakers dropped down from the architectural steel canopy – a clever disguise for the harsh architecture of typical temporary events – while large banners hid side-stage storage for Gary Clark Jr.'s many guitars. After walking on to Johnny "Guitar" Watson's "Those Lonely, Lonely Nights," the homegrown headliner noted: "They did good over here with this amphitheatre. Well played Austin."

Prior, while local duo Blackillac christened the stage, fans lined up across the bridge over Waller Creek, where despite an announced mask requirement, face coverings weren't enforced at entry or with any signage throughout the park. Telling of major outdoor events to come, few opted to mask up on their own in Texas heat. I wouldn't suggest the general-admission lawn (BYO blanket allowed, chairs not) for those hoping to spread out – most grass was already closely occupied during the opening set, leaving fans to spill over into walkways and lean on partitions.

Beginning with "Bright Lights," Clark Jr.'s first of two nights brought music back to acreage formerly blessed by the likes of Ray Charles and Patti Smith before a decade of shutter. Energetically in-the-mix of Downtown, heads swiveled to watch helicopters take off from caddy-corner Dell Seton. Glow from the stage reflected back in UT's mirrored Block 164 tower across the street, also gleaming just the tippy top of the Texas Capitol. The Austin countercultural legend who played alongside a young Janis Joplin and wrote songs for the 13th Floor Elevators, died this week at age 80. On the local Sixties scene, which would birth the psychedelic turning point in Austin's musical reputation, St. John told the Chronicle in 2006: "We all wanted to play folk music. And we became this small collection of like-minded souls who got together whenever we could. No one really thought beyond the evening's entertainment, but at that age we all felt anything could happen. Sometimes it did." Read a full remembrance on our Daily Music blog.