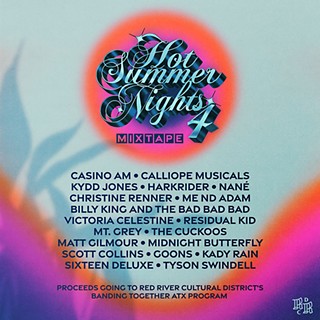 "I've been workin' on my shit/ You've been workin' to forget/ I know I'm not perfect yet/ Promise me you'll never quit." So goes the hook of Me Nd Adam's "Love Me" – a delightfully self-aware electronic pop earworm about being a piece of shit asking for patience.

That 2017 cut comes back around the Hot Summer Nights 4 Mixtape, a locals-only comp coinciding with this weekend's free HSN club crawl in the Red River Cultural District. The 19-track Bandcamp sampler raises money for the Banding Together ATX grant relief program benefitting Austin's entertainment workers. While the playlist leans rock, some of the most covetable cuts resound from Austin's field of quirky pop.

Calliope Musicals manifests a midnight bonfire of arty psych-pop with "Moonchaser," masterfully inhabited by vocalist Carrie Fussell. Nané comes in with the shoulder-shaking dance funk groove of "Blue Velvet" that's as irresistible as a free ride on a Jet Ski. Meanwhile, Kady Rain trades her rainbow pumps for cowboy boots with open-hearted country-folk offering "Take Me Home," an impressive new lane for the pop princess.

Guitarist Frenchie Smith, who produced most of the tracks on HSN4, makes a rare appearance on the microphone with his alt-rock veterans Sixteen Deluxe, arcing the refrain "Everyone's a superstar in the modern world" atop a glorious chord progression. That'd be the comp's most exciting unreleased song if not for Residual Kid's "Halfway to Paradise,"– a deceptively melodic stab of back alley post punk. – Kevin Curtin

12.5K Instagram followers and not one can talk smack about Y2's latest masterpiece "Big Mood." With a hypnotizing 808 echo and hardcore rhymes, "Big Mood" takes the average party tune and creates an ass-shaking, hot-as-hell slam dunk. "You are limited I am a limited edition/ They don't even make 'em like me anymore," states the Germany-born rapper/singer, full of smooth confidence. By the end of the 2:06, you can't help but hit repeat. – Morgan-Taylor Thomas

Witchcryer's When Their Gods Come For You

Suzanne Santo has a Yard Sale

As the title implies, Suzanne Santo's sophomore solo album offers a shedding, a reset that's landed the HoneyHoney songwriter in Austin after a breakup and ditching L.A. "I learned about changing," the rootsy pop chanteuse concludes triumphantly on banjo-licked "Mercy," and Yard Sale delivers a cathartic slow burn that both sears and soothes on its way to rejuvenation. Santo's immaculate vocals dig into the crevices of emotion, soaring into opener "Over and Over Again," dark and spiraling through "Bad Beast," and torchy on "Common Sense." Recruiting new neighbors Shakey Graves ("Afraid of Heights") and Gary Clark Jr. ("Fall for That"), Santo moves in bearing gifts. – Doug Freeman

Charlie Martin and Will Taylor long for True Love in "Around Again" and "Junior Day League," the latest tracks from their upcoming fourth LP. The duo swaddle side A in melancholy, acoustic strums and twangy accents, but pick up the pace for side B, where snappy drums pop and electric guitar simmers. "Can't outrun our history," they admit of an old flame, though later, they take responsibility for their solitude: "If I wasn't so uptight, you'd probably be by my side." Love never lasts, these songs imply, but warm melodies soften the blow. – Carys Anderson

James McMurtry releases The Horses and the Hounds

James McMurtry's poetry remains unparalleled. His songwriting grinds into the earth and unspools entire lives in an empathetic moment, a novel in under five minutes. His first LP in seven years, and debut on New West, familiarly balances between amped up rants ("Ft. Walton Wake-Up Call" and timely war ambivalence screed "Operation Never Mind") and gut-punched narratives ("Canola Fields" and "Jackie"). Yet it's the simple provocative lines that always arrest, especially in centerpieces "Decent Man" and "Vaquero" – the latter in memory of Bill Wittliff. McMurtry writes with utter compassion for his characters, even at their worst, and strikes at a universal heart of living. – Doug Freeman 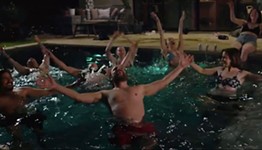