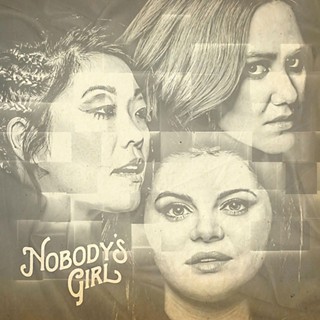 BettySoo, Grace Pettis, and Rebecca Loebe, each remarkable artists in their own right, struck an immediate chemistry on 2018's Waterline EP, funneling their songwriting instincts into more pop territory as Nobody's Girl. The trio's eponymous full-length debut fulfills that promise, not only in the uncanny power of their combined voices, but in the shared writing credits.

Like Pettis' most recent album, this year's Working Woman, Nobody's Girl strikes as both empowering and humbling, staring directly into hard truths with a fierce poeticism. At the outset, the anthemic "Kansas" sets a tone of breaking free of expectations and the uncertain excitement of where it might lead. Likewise, the songwriters surprise throughout, their voices amplifying less in harmonies than in a unifying whole propelling breathless traded verses, like the danger-baiting swings of "Rescued" and "Tiger," or the dark, intoxicating spill of "The Morning After."

As if the triumvirate talent anchoring Nobody's Girl weren't enough already, the band also recruits a local A-list for the album. Produced by Michael Ramos, who also contributes keys and percussion, the group adds Glenn Fukunaga's bass and wrangles guitars from David Grissom, David Pulkingham, and Charlie Sexton, with Conrad Choucroun and J.J. Johnson also sliding in on drums. Yet the backing ensemble never shows off, instead accentuating the frontwomen through various shades of country, pop, folk, and even rock ballads.

"What'll I Do" and "Waterline" both get reworked from the EP, and the group's knack for perfect covers continues in taking on Eliza's Gilkyson's burning "Beauty Way" and Carole King's tender "So Far Away." The poignant highlights, though, emerge in two more socially oriented songs, the hook-hung call of "Promised Land" and the stunning "Birthright," which reckons with the burden of inherited sins.

Perhaps the most impressive aspect of Nobody's Girl lies in the egalitarian nature of the whole project. The three voices meld into a nearly indistinguishable whole, as does the songwriting. A collective effort of defiant, supportive independence.