Faster Than Sound: Delta Variant Leaves Venues Between a Rock and the Governor's Orders

The latest on music hubs, festivals, and relief funding 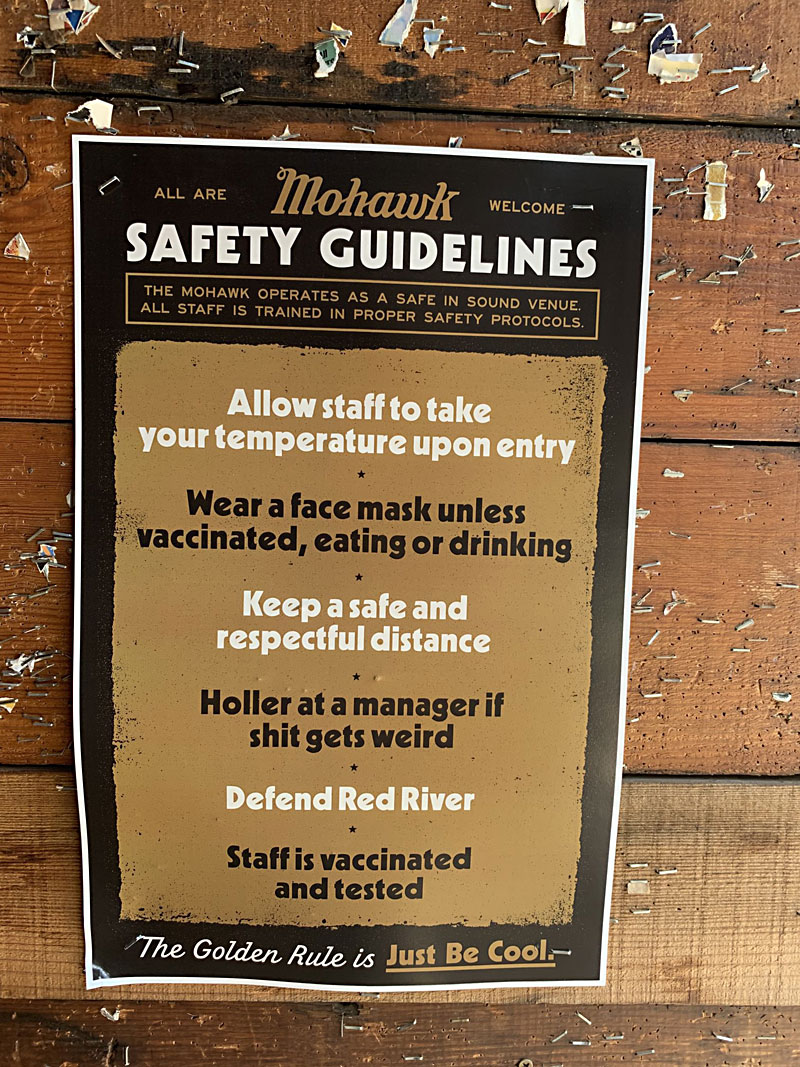 Shutting down a music venue due to a COVID-19 case among staff isn't cheap. Saxon Pub owner Joe Ables canceled a sold-out Bob Schneider show, paid for special sanitization treatment, and ordered a mobile testing unit after one member of his entirely vaccinated staff tested positive for the virus last Saturday. After five days of closure, the Saxon reopens tonight with Thursday resident Patrice Pike and James Bullard.

"The last thing I want to do is deceive the public," says Ables. "We could have told the employee to stay home and not tell anyone you're sick, but that's not good enough for us. If someone comes down with it, our policy will always be to stop and get tested.

"I really don't know what else you can do. There's no book you can go check out on how to handle Delta."

Multiple instances of COVID-19 cases among employees at various venues have been reported to the Chronicle, but few have inspired precautionary shutdowns. Rather, artists have led the charge on a growing wave of cancellations due to the Delta variant. Rebecca Reynolds, founder of Music Venue Alliance Austin, calls Ables a prime example of a venue "who did everything right and waited the longest to reopen" only to be thwarted by the recent surge in cases. She says the most common question posed by local health officials to music advocates has been whether venues can require masks and proof of vaccination – a discussion complicated by Gov. Greg Abbott's executive orders.

"Nobody's really addressing the elephant in the room, which is, venues who have applied for any sort of disaster funding put that funding in jeopardy by coming out with that kind of a policy," says Reynolds. "The venues have been told very clearly by the governor that they are in no better position to require vaccinations or masks than school districts."

Alongside school districts and governmental bodies, the latest July 29 order specifically prevents "any public or private entity that is receiving or will receive public funds through any means, including grants, contracts, loans, or other disbursements of taxpayer money" from enforcing vaccine requirements. The new rules raised flags for music hubs, many of which received emergency relief via the local and national grant programs this year. When asked about guidance to venues, the city of Austin's music office provided this response to the Chronicle:

"As far as any specific advice, venues should consult with their individual legal reps to interpret how the above orders may or may not affect their businesses."

While festivals like Lollapalooza required proof of vaccination or a negative test under city of Chicago requirements, the governor's order leaves Texas music in a unique statewide conundrum.

"Venues and music in Texas, their approach cannot be compared to what's happening in Chicago or New York or California," explains Reynolds. "Their hands are tied and they're still trying to sort out what they can and can't do."

Reynolds suspects safety protocols at the request of the artists, rather than by venues, may provide a workaround. This was the case for three nights of Jason Isbell at the Moody Theater last weekend, which required masks as well as proof of vaccination or a negative test. Widespread Panic followed up Monday with similar requirements for a three-night run this weekend.

A representative of ACL Live declined to comment on the topic of artists requests. Of course, strict safety protocols are only viable with adequate resources. At Saxon Pub, Ables says requiring proof of vaccination would be a "staffing nightmare." The space currently recommends masks for patrons of the indoor space, with masks required among staff.

"We don't want to enforce anything, because it would be dangerous," says Ables. "We're all masked up for you. Be safe for us." 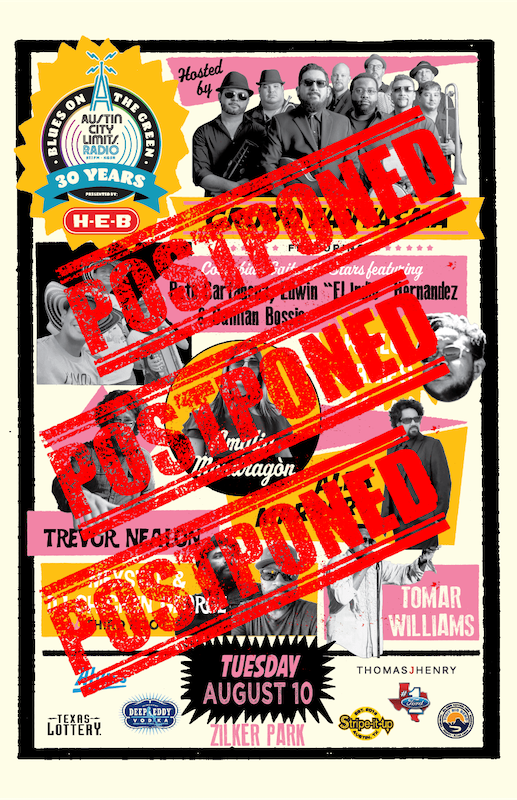 Courtesy of Blues on the Green

This week delivered the cancellation of specialty gatherings like JMBLYA's September stop at the Germania Insurance Amphitheater, River Rodeo Fest's planned August date in New Braunfels, as well as the final two shows of Blues on the Green's already shortened summer season. Just one day out, presenter Austin City Limits Radio announced plans to reschedule the latter August 10 and 11 shows at Zilker Park, "as a result of the latest wave in this public health emergency."

Most ominously, New Orleans' Jazz Fest pulled the plug due to rising COVID-19 cases in Louisiana. Like local ACL Fest, the major multiday gathering was slotted for two weekends in October. Still on the books, ACL Fest announced new headliners Tyler the Creator and Duran Duran for both Sundays. Tyler replaces DaBaby, dropped from the fest due to homophobic comments. Duran Duran subs in for Stevie Nicks, who canceled multiple shows over COVID-19 concerns.

Live Nation, parent company of local ACL promoters C3 Presents, rolled out new best practices. The concert giant will allow artists to choose whether to require proof of vaccination or a negative test for entry, with a message from the CEO "encouraging as many shows as possible to adopt this model." The entertainment company also requires employees to get vaccinated.

As the Delta variant disrupts live music, incoming emergency funding turns up smaller than music advocates hoped. Following the prior passage of $10 million in federal relief by City Council, a July budget proposal by the city manager reduced the music number to $4 million. At the last August 2 meeting of the Austin Music Commission, the group doubled down on Council's original $10 million promise of assistance from the American Rescue Plan Act. 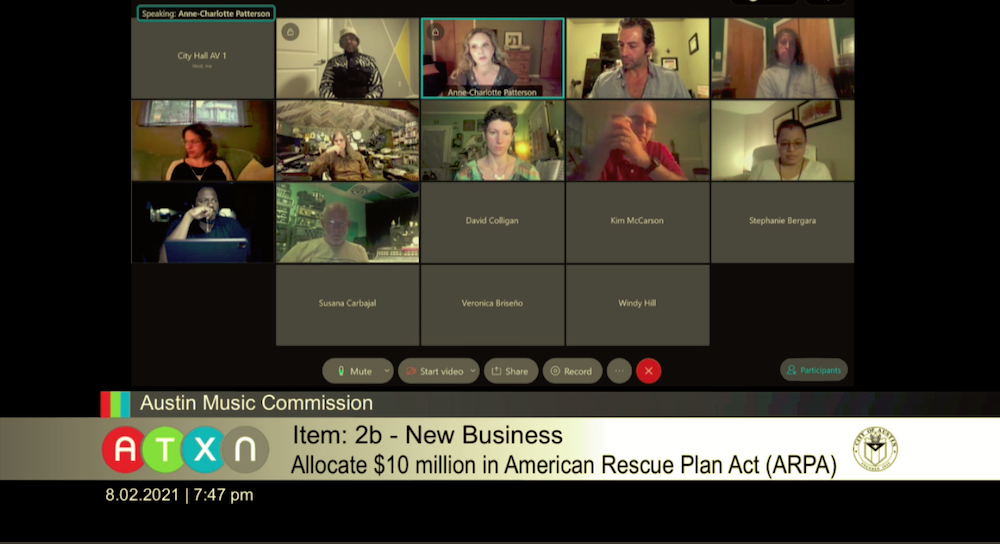 "This is what you all said you were going to come to the table with and this is what we expect," said commission Chair Jonathan "Chaka" Mahone.

After an initial push for amounts totaling $20 million by both the commission and advocacy organization Music Makes Austin last April, $10 million passed in a May 20 resolution by City Council Member Vanessa Fuentes. The amount, to be distributed over two years, could help replenish existing programs like the hotel occupancy tax-supported Live Music Fund, diminished due to COVID-19 tourism drops, or the venue-supporting Live Music Preservation Fund. Noting that ARPA funding is also in demand for city services like supporting homeless populations, Commissioner Anne-Charlotte Patterson added:

"There's a lot of value in protecting people from falling into homelessness. We've had many musicians state that with the Delta variant, the situation is dire again."

The commission reiterated the need in a unanimously supported resolution. The group stressed "the economic urgency created by the pandemic and increasing unaffordability in Austin." Commissioner Oren Rosenthal emphasized the music industry's $2 billion annual impact on the local economy, stating that "this recovery funding is being underinvested in music and will bring about economic harm, not just to musicians, but to all of Austin."

"In the last few months ... a lot of people have felt like we're moving forward and maybe [the need] hasn't seemed as urgent," said Commissioner Lauryn Gould. "But in the last week, the need has become urgent again. We're about to go through the same thing that we just went through, only now we don't have any unemployment assistance to fall back on."