You Can’t Put Your Arms Around a Memory

The sun never sets on a newsweekly deadline, but in 27 years on the grind as Chronicle Music editor, a few moments stand out... 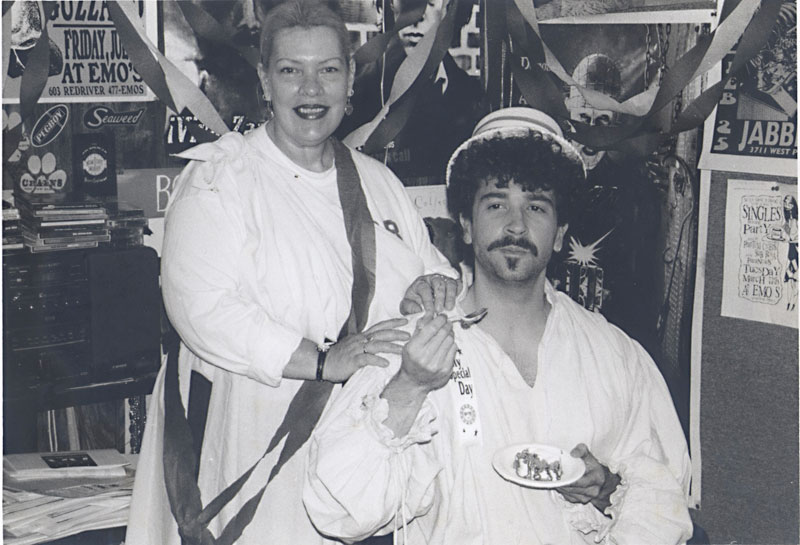 Let Them Eat Cake: Marianne, the French symbol of liberty (Margaret Moser), and Louie Louie (Raoul Hernandez) at a Chronicle Bastille Day celebration in 2000 – in the same spot they met. (Photo by John Carrico)

"Barbara Crampton." The first two words I uttered to Margaret Moser fused us through life and death. Fresh off a Bay Area refugee boat and crashing with abuelita in San Antonio, I made an initial foray inside the Elgin Butler Brick Company building that houses the third Chronicle HQ to type my master's thesis about parental warning stickers on CDs into the server. Art-hippie Slacker haze swirling around me, a Jeopardy!-esque point of film trivia between unseen co-workers floated over the partition separating the desk I sat at from the proofer's pen like a badminton birdie: "What was the name of that blonde in Re-Animator?" For the next 25 years until her death one storm-torn night in Texas, Margaret and I shared a brain, a soul, the Rolling Stones. Chronic from the start, 1981, she maneuvered Music editorship for me, and we worked good cop/bad cop/mom & dad for decades, me the backstop and her the water bucket. Together, we also lit out for every Stones date within a 1,500-mile radius.

Valentine's Day 1993, my hire date here. Yet even before assuming the bridge the following fall, I pulled this SXSW Live Shot. At the original location still cushioning the corner of Red River and Sixth, the downstairs stage stood at least 4-feet high and upon which strode a 6-foot-2-inch man in black (taller in boots), who towered like the Washington Monument. I cried with supreme pride. Only Fats Domino prompted the same response years later at a New Orleans Jazz Fest.

One bitter cold February night, Andy Langer and I migrated down Red River from a sold-out LeAnn Rimes extravaganza at the Erwin Center to a colossal umbrella drink bar on Sixth Street. Desolation row, hello. Performing o-u-t-s-i-d-e, then, to a shivering group of maybe 20-30, Joe Simmons, Darryl McDaniels, and Jason Mizell from Hollis, Queens, decimated a 12-inch-high makeshift stage no bigger than 3 feet square for well over two hours.

Fortune hunters the Vaughan brothers paved the streets of Austin blue, so I quested to Texas July 1992 in search of my own golden idol. Cactus Cafe heartbreaker, orchestra leader, Buick MacKane wrecking ball, Alejandro Escovedo revealed himself within weeks of my arrival and I never looked back. Canyon Lake offered an ample christening opportunity when his brood took up resistance there, for which I took an internal drubbing at the paper about homoeroticism. A month later arrived my Flatlanders embedding and with it photos provided by handlers for the West Texas mystics – of Joe Ely, Jimmie Dale Gilmore, and Butch Hancock up to their necks in water.

My sympathy for the devil began during commercial breaks for Sesame Street, wherein they hawked Stones comp Hot Rocks 1964-1971 and first grade me leapt about like a lemur to the overlapping harmonies at the end of "Honky-Tonk Women." Decades of stalking ensued until the day I woke in my own bed in the same town as that night's tour stop debut. Never repeated: Jagger shouting out the Broken Spoke before intoning Waylon Jennings' "Bob Wills Is Still the King," and Richards sweetly croaking Buddy Holly's "Learning the Game."

When a major label crony of mine began representing Motown's musical architect on the side, I took note. Backstage in Ft. Worth, in a store room/dressing room straight out of All About Eve, a preternaturally silken man grinning through the largest, most luminescent green eyes this side of Saturn sat me in a Fifties barber chair, knelt at my feet, and told me to roll tape. (Indeed, said seating arrangement immediately reversed.) At dinner, when he leaned over conspiratorially to reveal his go-to munchie (Häagen-Dazs), my mind melted. An elbow into the side of panels director Andy Flynn brought home the next year's SXSW keynote, whom I introduced. Blinded by the lights, I finished and all but fell down the few steps offstage – right into the waiting arms of one William "Smokey" Robinson Jr., who hugged me hard and whispered thanks into my ear with the voice of an angel.

Hardly my first dunking – Amy Cook in 2010 comes to mind – nor my first on-site cover shoot direction, but certainly one where I walked with giants, as Austin trueheart and Chronicle scribe Bill Bentley once put it. As our entourage strolled down toward Barton Springs into which Texas' second best songwriter waded without a second thought, Billy Joe Shaver and I pulled ahead of the pack and shot the shit. He missed his parents, his son Eddy, and his wives, but already, long had he walked with God.

Breaking Music news in this town remains a fraught business because its creatives wrestle for control of the narrative.

State seat of government, Austin doesn't identify as political. Here, music is politics. As such, breaking news in this town remains a fraught business because the creatives wrestle for control of the narrative. No one remembers which media got there first (Kevin Curtin), but everyone present for Levitation at Carson Creek Ranch on Sunday, May 10, will never forget the convergence of four members from psychedelia's co-creationists: Roky Erickson, Ronnie Leatherman, John Ike Walton, and electric jug exorcist Tommy Hall. That night, as waxed poetic by Chronicle reviewer Tim Stegall, "The 13th Floor Elevators emerged from the mists of myth and legend and became flesh again."

Build a stage in any field of dreams, book the right bands, and they/them/theirs will come. Sadly, festival culture reduces to the same set of acts and those routing through anyway. Fun Fun Fun Fest broke the mold locally by understanding that hip-hop, soul, indie rock, punk, metal, EDM, etc. exist as one language to society's true progressives – youth. Thundercat's soundcheck at dawn in McDade's sprawling Sherwood Forest, Courtney Barnett out front of the whole site on an enormous bouncy house dragon stage, Bob Mould's punk incantations deep in the woods: FFF successor Sound on Sound married setting to superstars in a way only Austin Psych Fest at Carson Creek Ranch managed, and paid the price when investors pulled out the second year and SOS unceremoniously died. 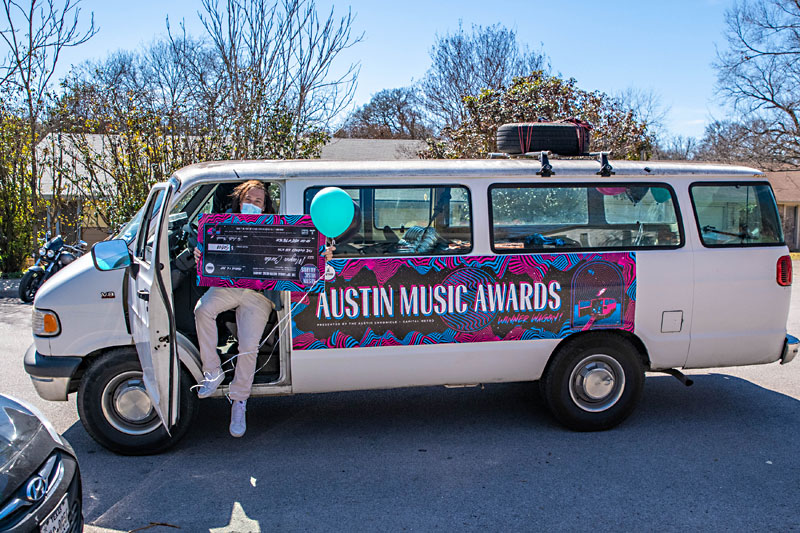 The house Louis Black, Nick Barbaro, and Margaret Moser erected by grit and glad-handing, belief and endurance, sustains through four decades of thick and thin, so guess which of those sums up 2020? Mobley's curbside tour – bringing the fiesta to Austin's 24-hour party people one doorstep at a time – proved my ace in the hole at that fateful Zoom meet with Kevin Curtin, who as a musician understood no plaque could compete with a bit of good old fashioned relief aid to an industry collapsed. Agnes Varnum prompted the Publisher's Clearinghouse-sized checks idea as an event planner forced out of the workplace and into indentured Zoom servitude to our grade schooler. Shakey Graves then honored the door-to-door emcee who proved a face of Austin music in 2020 equal to Musician of the Year Jackie Venson: Kevin Curtin, newly minted Chronicle Music editor. Here's looking at you, kid.

Faster Than Sound: Raoul Hernandez, Not Like Everybody Else
Outgoing Chronicle Music editor on 27 years of pure emotion