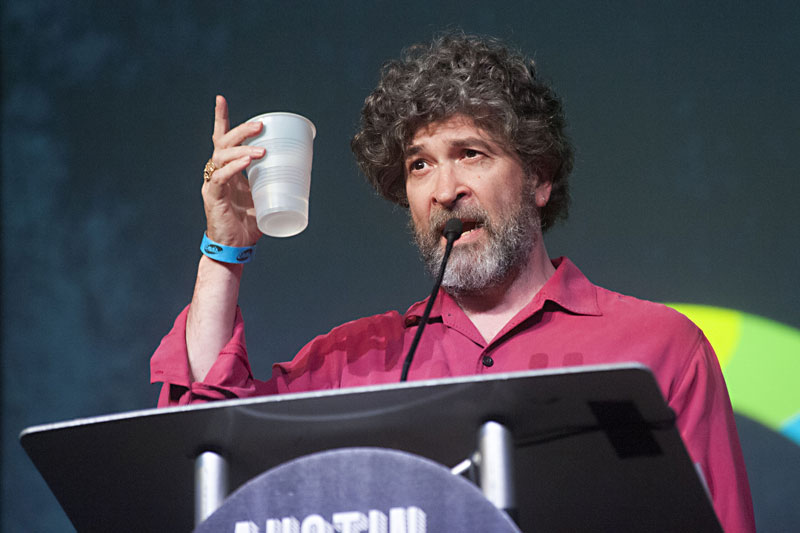 To the writers who've worked with him, however, those pages aren't his legacy. Rather, it's this: When Raoul is your editor, your life's forever changed for the better. Consider the roles of impactful figures in one's existence. Teacher, therapist, parent, friend, coach, and priest – Hernandez's approach to editing embodies all that. A more willing mentor you've never met, seeing greatness in undeveloped dreamers, dosing them with a mix of encouragement and instruction that pushes them to their potential.

In the mid-Nineties, his curls were stacked taller and might've been 65% more effervescent. Five or six nights a week, for years on end, I'd scan a crowd for 'em, work my way over and, between sets, banter about what we liked and what we were excited about seeing next. Raoul wasn't yet a professor, but also he kind of was – he nurtured a ragtag band of misfits who saw music journalism as more of a lifestyle than a craft into a murderer's row of actual deadline-making reporters who gave Austin music fans a reason to get up early Thursday mornings. Moser. Stegall. Lieck. Myself. Then multiple generations thereafter. We too often got the glory he deserved. He said yes to our good ideas, made our mediocre ones better, and when he took a hard pass, it was to protect us from ourselves. Twenty-seven years of watching clubs turn into condos? Twenty-seven years of changing "Vaughn" to "Vaughan"? An unbreakable record for which he deserves sainthood (and now, early UT tenure). Long live Raoul, long live the Chronicle.

I was late to the first meeting I ever had with Raoul – I said I'd been pulled over on the way. The truth? I'd overslept after an all-night mad dash to finish a paper on French Impressionism (sorry, boss!). Already a senior at UT, I didn't know when I stepped into the Chronicle offices that I was about to gain another professor.

During my internship with Raoul, he taught me about critical Austin music history. He sat with me to compare raw copy with finished pieces side-by-side. It was an extension of lectures and homework, but this time I had so much fun I stuck around for a decade after I graduated. Congratulations, Professor Hernandez. You've always held that title for me.

After scribing under the rule of Raoul for almost 25 years, the thing I came to appreciate most was his willingness to let me play deep left field when something oblique captured my fancy. There weren't many alt-weekly editors willing to greenlight 2,000 words on the joys of ad jingles or the unintentional brilliance of K-tel compilations, but Raoul got it. Give the writer a bar to solo over and they'll owe you one. In my case, payback came when Raoul made me review a Yanni concert. The marathon show was both excruciating and baffling, but I did my best to understand just as Raoul did with my odder pitches. So thank you, sir (and I forgive you for Yanni).

Without Raoul, I would not have a writing career. When I came home for good, I was, I believed, interminably lost and scattered. I knew I wanted to write, but I hadn't finished that journalism degree like I should've. I had no direct connection to Austin's writing community – mainly because I'd spent the previous 11 years or so globe-trotting on "the man's" pretty penny. I sent an article I'd written for a hip-hop website to Raoul and badgered him for a few weeks until he took a meeting with me. My appreciation for him as a friend, a mentor, a teacher is immeasurable. Whatever it is that I am, and will be, will come from Raoul as a foundational figure in my writing career.

Despite the karma-challenged Scandinavian death metal that Raoul revels in and wears like a badge of honor, deep down he's a snooty jazz sophisticate at heart.

Back in the mid-late Nineties I was hosting a Wednesday night jazz program on KUT. For a long stretch Raoul would come up to the studio and hang out. More often than not, early in the evening, I would put on a long track and we'd retreat to the stairwell to "praise Jah," returning with inspiration and enlightenment. 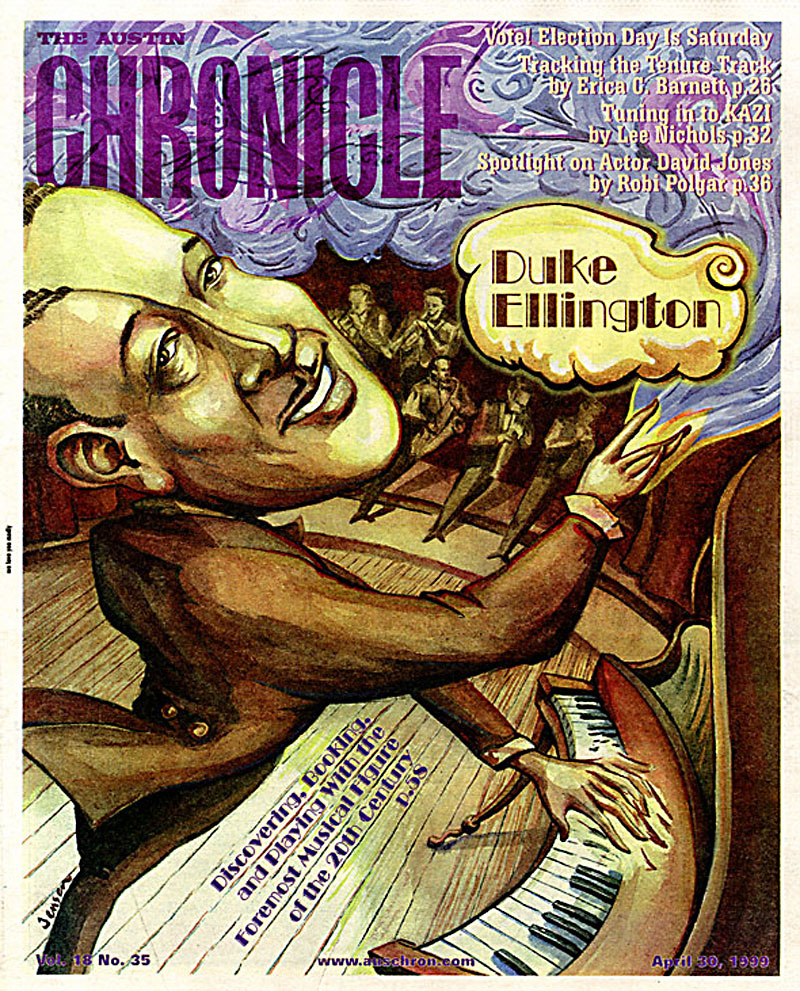 As was my practice, each week I would play at least one Duke Ellington tune. His 99th birthday fell on our Wednesday night in 1998, April 29 to be exact, and we both realized that the following year the Maestro's Centennial would drop on a Thursday, the day the Chronicle hits the streets. It didn't take much coaxing from me because our Music editor was instantly on the same page. Duke Ellington would grace the cover of the Chronicle the next year, on his 100th birthday, and the issue would be dedicated to him.

Raoul did a splendid job putting it all together and it stands out as one of my favorite issues ever.

When parenthood's got us delirious and we're feeling homesick for Austin folk, I'll dial up Raoul's Twitter account and do a performative reading of old tweets for my wife, who loves when I do this. And how in the Sam Hill can you NOT when there's so much GD life in all these posts?! Downright R-A-B-I-D!

Raoul's spoken voice is a marvel: theatrical and rich, the kind that echoes over the constant hum and chatter of an office. I used to hear it as soon as I walked inside the building; I still hear it today! But it's his writing voice that I remember most fondly: this swirling vortex of hyphens, colons, and capital letters ... of nouns working as verbs and sometimes vice versa and always references to old music or movies or bygone lyrics breaking through.

When I started full time at the Chronicle, my desk was next to his and I'd spend my days listening to him work. He'd type the keys in fits and starts, and he'd grunt out every new word. I'd hear his elbow drop down on the desk, his hand smack across his forehead. I'd look over and his glasses would be up in his hair; his face worn down and red. Writing was always physical for Raoul; it's how he got the most from it.

I'll never forget the first time I impressed Raoul. I'd been trying to get his attention for months – sending him clips and stalking him at shows – while at the Daily Texan. Then, at the Rolling Stones' A Bigger Bang stop in Dallas, he actually approached me, incredulous and more than a little annoyed. "How did you get two tickets?!" (I told the publicist I needed a ride.) We shared countless long car trips in the years that followed: the Sword opening for Metallica in Houston, Plácido Domingo in San Antonio, Robert Plant and Alison Krauss in Ft. Worth spring to mind. I'd like to say we had great conversations, but truthfully, I mostly listened and observed. Raoul orates the way Tia Carrera jams: one riff of genius and you're halfway to Waco. I learned a lot that way, about music and editing, certainly, but also about life and finding the little details that leave an impression. I couldn't have asked for a better +1.

When Austin Powell and I first approached Raoul in 2008 about creating the Austin Chronicle Music Anthology, we'd been writing for him for less than two years. Any skepticism sprung from his understanding the massive extent of the undertaking. Yet he still threw his support fully behind us, opening doors without which we couldn't have gotten the project off the ground. Maybe even more impressively, he maintained a distance that trusted two of his youngest writers in curating the entirety of the Chronicle's then-30-year history of music coverage. In my mind, that combination of support and free rein encapsulates Raoul's brilliance as an editor, his insight to guide where a story needs to go while still allowing his writers to find their own voice and narrative within it. 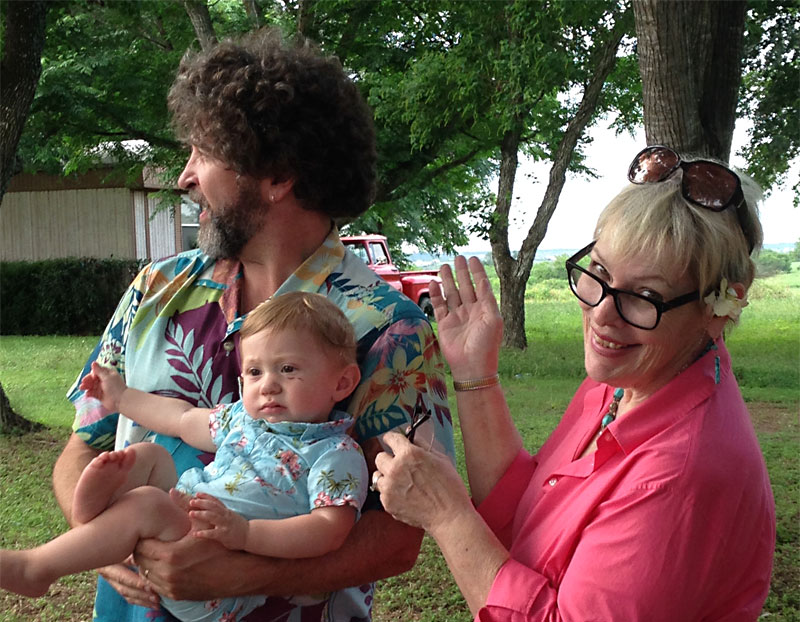 Raoul and son Lazlo with the late, great Margaret Moser, his predecessor as Chronicle Music Editor (Photo by Marjorie Baumgarten)

Record reviews, Raoul taught me, make good music writers. Short assignments demand cutting to the chase; the art lies in planting the necessary info and emotion within that narrow window. As an editor, he was serious about deadlines but more than up for fact-finding adventures to the Buddy Holly museum in Lubbock or an Eric Clapton guitar festival at the Cotton Bowl. In hindsight, I wish there had been more of those. Whatever I may have taught Raoul about patience (which I suspect, at one point, was quite a bit), it certainly pales next to what he's taught me.

I've only known Raoul in the midst of a pandemic. Zoom calls and email chains don't make for the most personable communication, but when I enrolled in his music journalism class at UT, I set out to make it work. From behind a screen we traded concert stories and High Fidelity neuroses, and Raoul taught me the art of the blurb. Along the way, he likened writing about music to a club. You have to be crazy to join this industry, and you have to love music to agonize over the words you use to describe it. As I write for the Chronicle now, I have to say: Thanks for welcoming me into your club, Raoul. Guess I'm crazy too.

Working for you at the Chron meant exciting adventures, occasional failures, and lots of hard work. Constrained space prevents recounting stories in the detail they deserve, so instead I'll just say thank you.

- For nurturing something in my efforts that I wasn't sure was there, and for shepherding my best work into print.

- For showing me how to dance the fine line between professionalism and inspiration.

- For years of fun hangs at everything from a dream-fulfilling King Crimson concert to a craptastic metal festival.

- For conversations about the fate of aging music critics in an ever-evolving media universe.

Most of all, thank you for years of friendship outside of the paper – a friendship I've no doubt will continue.