Live and Recorded Austin Music Worth Your Bandwidth This Week

Black Pistol Fire, BLXPLTN, Jazz for a cause, and more 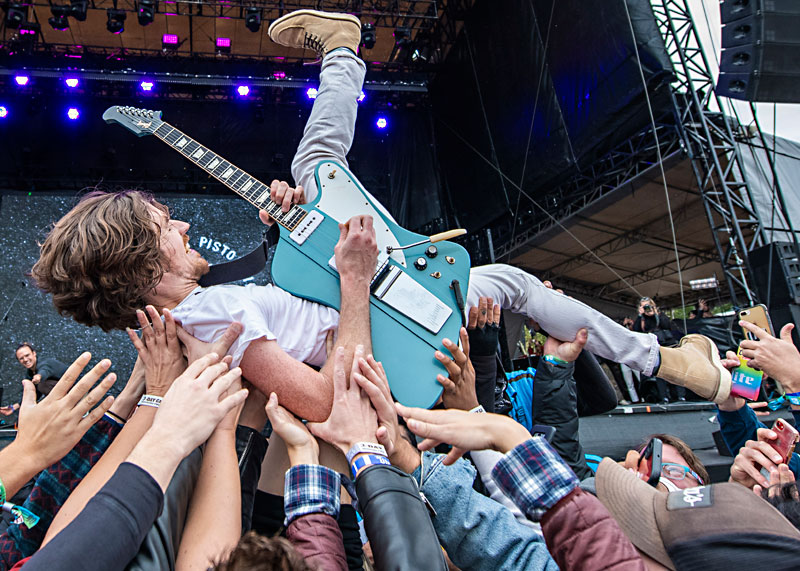 There's a peak moment of rowdiness in almost every Black Pistol Fire show when singer Kevin McKeown catapults his wiry body backward off the stage, into the outstretched arms of the audience – then shreds guitar while being passed around like a beach ball!

On July 9 in Telluride, with the Austin duo making its first live appearance in 17 months to a hungry audience, McKeown inevitably hit liftoff, launching into the throng as Eric Owen laid in a hefty backbeat from the drum riser.

"I had kind of wondered if he was going to jump in ... and he did," confirms the drummer. "A lot of times I don't even see it because I'm playing drums and a synth. I just hear the crowd go, 'Ohhhhh!' and I know what's happened."

Owen and I have just finished going head-to-head in an axe-throwing contest at an East Austin facility. He beat me handily in back-to-back games – him tossing easy bull's-eyes and me desperately heaving hatchets to make up huge point deficits. Later, he reveals I never had a chance:

"Being Canadian makes me better [at axe-throwing] than you."

"We're one of those bands you get annoyed with because they're playing us so much," jokes Owen of alternative radio in his native country and its affinity toward Black Pistol Fire.

On tour in the Great White North last March, they retreated home when the pandemic tripped the emergency cutoff switch on the global concert industry. Owen remembers the Denver airport looking like a disaster movie, with passengers frantically running around the terminals. In the ensuing year and a half, the collaborators since high school experienced unfamiliar isolation from one another.

Now back in business, munitions of pent-up energy prime BPF to blow the roofs off American venues. This month's tour, anchored by an appearance at Lollapalooza in Chicago next week, crescendos locally on Friday at Emo's, with Emily Wolfe and Shooks providing support. Mark it as their first Austin engagement since ACL Fest 2019.

"I was nervous, but it felt amazing," admits Owen about returning to the sweaty communion of the concert experience. "The crowds have been fuckin' insane, so that helps." – Kevin Curtin

A Night of Jazz Together

Physicians for Musicians Together Again

Like the SIMS Foundation, the Musician Treatment Foundation aims to facilitate free and low-cost health care for uninsured/underinsured players – specifically targeting the hand, shoulder, and elbow issues pro musicians endure after spending years on the road. This pair of interlinked benefits intends to raise funds and awareness for the organization. The party begins at Parker Jazz Club on Friday, with a ripping lineup headed by fusion guitar star Mike Stern, who cut an album with Austin's Eric Johnson a few years back, and eclectic saxist Bill Evans, with whom Stern played in Miles Davis' early Eighties comeback band. Given the dearth of touring jazz acts to our city and the intimacy of Parker Jazz Club, expect this one to sell out. The same musicians reappear at the Long Center on Saturday alongside Austin singer-songwriter queen Shawn Colvin and Wimberley stringed- instrument polymath Sarah Jarosz, whose touring band includes guitarist and producer John Leventhal, Rosanne Cash's musical and professional partner who's also worked with Colvin. Local artists the Accidentals, Allen Mayes, Luis Angel Ibanez, and Tameca Jones round out the bill, while SiriusXM's Broadway specialist Seth Rudetsky and Austin City Limits Executive Producer Terry Lickona emcee. – Michael Toland "Here in the country, I'm getting my heart free, watching the kid come back," contemplates Robert Harrison over an easy strum on the title track to his first solo album. The venerable psych-pop maestro behind Cotton Mather and Future Clouds & Radar pulls inward for Watching the Kid Come Back, a product of retreating alone to a Dripping Springs cabin last year. Harrison's warm, nasally croon touches on Jeff Tweedy as he tunes his ear to the Hill Country retreat. "Cool Water Blue Rain" washes a country flair over his Britpop sensibilities, aided by BettySoo's vocals and Gary Newcomb's pedal steel, while "Ah Wilderness" wields a subtle Western mirage of Morricone. Only "Real Life Satyr" surges with Harrison's psych warp, which feels like a molting amid the gentle daydream turns of "Sitting in the Sun" and steel-baked "Stella Not Too Late." Supported by Suzanna Choffel, the Supremes' "Someday We'll Be Together" closes on a hopeful note. An album of small revelations amid big changes. – Doug Freeman

Austin composer Michael C. Sharp flexes his transliteration of European psychedelia to complete fruition on his sixth album, Synth Vehicles for Guitar. Laying out his intentions right in the title, the Sungod axe player and punk rock drummer manipulates far more sounds than just pick/steel/amplifier. "Night City Anthem" loops electronic sound washes over a repetitive pulse, spiking the flow with gnarly stabs of guitar. Ringing chords out of the Eighties UK playbook add texture to the undulating "An Exquisite Aberration" before giving way to the metallic slashes and motorik throb down the highway of "Eliminator." Synthwave epic "Motor" forms the album's centerpiece on a three-part edifice of guitar, synthesizer, and rhythm that could soundtrack your favorite sci-fi/action masterpiece from the Reagan years. Appropriately out on local electro talent scouts Holodeck, Synth Vehicles for Guitar gorgeously manifests Euro-electronirock deep in the heart of Texas. – Michael Toland

Austin's angriest electropunk politicos come screaming out of lockdown with their most ferocious single yet. Over blown-out, beyond-distorted guitars and heavier-than-Bonham beats, charismatic leader Taszlin Rico Muerte screams a state of emergency ripped straight from CNN headlines: "I woke up in a basement/ With my face gone/ They replaced it!" Then, there's the video, which amps up the frenzy, TasZ emerging from the solid black shirtless, screaming, his grill glinting in the darkness: "Hearts blacker than a black site!" He keeps getting pulled back, only to break free and reemerge: "I tried to breathe/ I wiped my eyes/ But I couldn't see/ I think they're gonna hurt me now!" He exhales thick smoke, seething, furious at the state of our world. Digital data gets projected over him. A hood is pulled over his head – he struggles. "Malware detected," reads the screen. – Tim Stegall

Heralding a forthcoming EP of the same name, "Forge Your Future" doesn't merely poke its head out of the darkness that's threatened to engulf previous Spirit Adrift platters. It flat-out kicks a hole through it. Sobriety and success continue to empower bandleader Nate Garrett out of Bastrop, here armed by a defiant uplift. A thickly melodic riff and anthemic Eighties sweep instruct fate to fuck right off, encouraging anyone who feels like their path's been set – thanks to genetics, bad habits, or blinkered thinking – to never forget their core. The track flat-out rips, balancing a tuneful accessibility with raw power. Remember when Mastodon and Baroness ruled the landscape? – Michael Toland

"Authenticity, that's what is great about here. Everyone is real as shit and there's so much energy," offered Strand of Oaks' Timothy Showalter when he moved to Austin at the end of 2019. "Galacticana," first single off October's upcoming In Heaven, celebrates that energy as the Indiana native returns to the stage amidst coining his own term for Strand of Oaks' mellow psychedelia. The song swoons in a haze of need for and joy in the communal experience. Written at the outset of the pandemic, it yearns in the face of loss and ecstatic resilience. – Doug Freeman