Faster Than Sound: Raoul Hernandez, Not Like Everybody Else 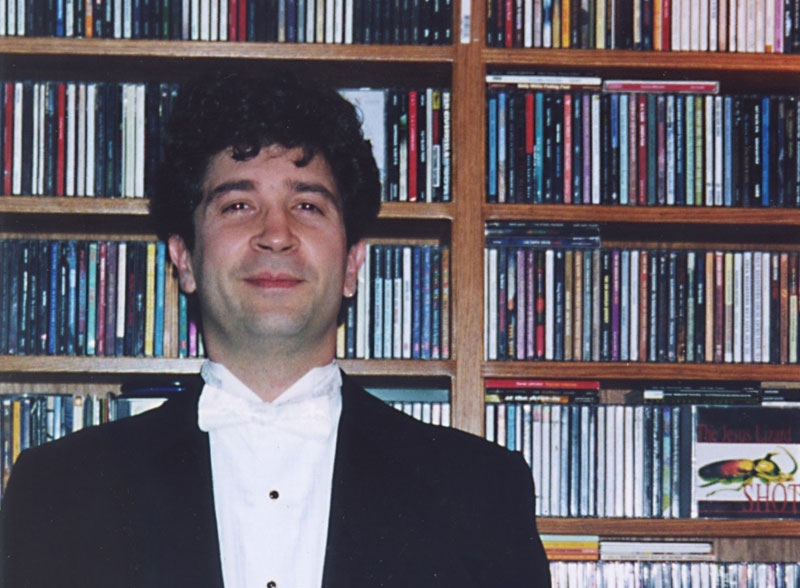 Raoul’s return to polite society in 2003 following two emergency surgeries for a fractured nose suffered on the Chronicle volleyball court. He bought the tuxedo tails online for $25 and got married in them a decade later. (Photo by Marjorie Baumgarten)

Raoul Hernandez entered the newspaper industry at age 10, as a paperboy. With characteristic storytelling flair, he deems himself the last generation in that role before "soccer moms in their Cabriolets took over like the mob." His print breakthrough arrived at a post-collegiate record store gig, when the publisher of a Bay Area mag spotted the English major's review of a Gram Parsons reissue on a CD rack.

The equal-opportunity music evangelist would go on to pen music criticism for his hometown SF Weekly and Creem before landing at the Chronicle fresh out of Stanford graduate studies. After 27 years at the pulpit as Music editor, Hernandez's full-hearted, long-winded confessions span Bo Diddley to Pink Floyd's Roger Waters and Lisa Gerrard of Dead Can Dance.

I arrived after most of these mythic moments, as an uncertain summer intern four years ago. I enjoyed interviewing bands for college outlets, but ducked any personal sentiments. Cosmically, my new editor crusaded music writing as pure emotion. From my perch on the dog hair-covered sofa neighboring his desk, Hernandez demonstrated how "Jumpin' Jack Flash" as a phrase doesn't mean much, but it sure conveys feeling.

As our fearless reviser heads to a full-time professorship at UT, I'm thrilled for the journalism students at my alma mater gaining a teacher, mentor, and unlimited source of encouragement. He'll enter their lives just when they need a boost into the real-deal writing world, as he did for me and so many others. Staff muckraker Kevin Curtin steps up as the Chronicle's fourth Music editor in 40 years.

As Hernandez reminds, his emotive, deeply contextualized, and sometimes inscrutable prose will continue to grace these pages. He's not leaving, just moving down the street.

Austin Chronicle: Your writing is very artistic for the journalism world. How did you develop that confident sensibility?

Raoul Hernandez: I'm an only child, so my parents gave me that. I grew up just over the hill from Berkeley, in a very affluent suburb with very little diversity. My father's from Yucatán and my mother is from San Antonio, so Spanish is my first language. My mom was always like, "You're not like all these other kids." To quote the Kinks song, "I'm not like everybody else." She would say, "Go to Berkeley, there's culture."

When I started writing about music, my high school sweetheart said, "You're using all the cliches of this form." That stopped me in my tracks, so from that point on, I just didn't want to sound like anybody else. That's what I teach. In order to write about something creative, you need to be really creative. If you're writing about a five-star album, your writing has to be five stars.

All good writing is about your own powers of observation. If you cover an ACL Fest headliner, nine out of 10 people are going to write, essentially, the same thing. So take it in and when you leave, what's still running in your mind? It could be someone's shoelaces, anything. Start there and the rest of the story will come out.

AC: Which requires being in touch with your feelings.

RH: You have to be self aware to be a good writer. Half the things I write, my wife's like, "I don't know what this means." Making this transition, she suggested a contest where people chose a paragraph I wrote they have absolutely no idea about. I never tried to be obtuse, but obviously, not everything hits. It never stopped me from trying.

AC: Working with young writers, what does our generation need regarding music writing?

RH: They need confidence. When I started at UT as an adjunct in 2018, at the journalism department orientation, program director Kathleen McElroy said, "Bottom line, we're sending these kids out into the world with confidence." Man, that is a mission statement to live by. It's such a vulnerable spot to work a creative career, because half the people won't like what you do. Yesterday, a student said to me, "I'm a nerd about this and totally into this, but I just don't know." I'm like, "Pursue that. What you think is nerd-dom is actually the beginnings of your own scholarship. You're a writer already. Own it and move forward."

RH: Margaret Moser was the best talent scout this town ever saw (revisit "Playback: You Can't Put Your Arms Around a Memory"). I compare her to John Hammond, who "discovered" Billie Holiday, Bob Dylan, Bruce Springsteen, and finally Stevie Ray Vaughan. I cherish the fact that Margaret's last discovery also proved her best. In 2011, she said to me, "I talked to this guy working at Planet K, so expect his call." Kevin is an incredible reporter and an equally gifted writer, but he's an even better human being. I've not met many people like him, where I talk to him for five minutes and I feel better. Whatever's coming out from inside of him is really life affirming.

RH: Metal came into my life with the very first album I bought with my own money. My parents kept the car running outside Tower Records in Berkeley as I ran in and bought a cassette of Abbey Road. On the second side, John Lennon's got a one-minute-and-13-second hardcore head banger called "Polythene Pam." I used to bang my head to it and it's still like that.

RH: I really believe that in the next 20-30 years most newspapers will go away. And I believe in digital publishing, but the problem is, print built infrastructure. The infrastructure gave you health care, 401(k)s, an office to go to, and peers. Now, any young writer can accrue bylines for 20 different blogs, but you'll never get one day of health care benefits for it.

The dinosaurs are dying, and we don't know what comes after the dinosaurs. Who's going to pay for the longform journalism and in-depth reporting? That's why Austin is so lucky to have the Chronicle, because the Chronicle fervently believes in its mission statement of covering this community for the community. It's never wavered.

RH: There's 1,000 stories, but in the early days of C3, [booker] Amy Corbin asked me, "Who would you like to see at Stubb's?" Ever the down-the-rabbit-hole guy, I said, "His name is Manu Chao, he's Spanish, but his parents were political exiles in Paris. His punk band, Mano Negra, is the French version of the Clash. It's on fire, it's political, it's folkloric!" I went to Waterloo Records and got Amy his first solo album, Clandestino, and sure enough they fell in love with it and worked to get him for years. The first time he played Stubb's, sitting side by side, we did an interview in Spanish in their production offices. It was like getting access to Yoda. I tell students, move in the direction that you want to end up and opportunity will cross your path. That's all that ever happened to me. 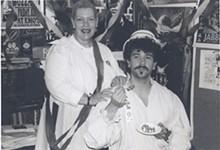