Maneuvering a tour van in the darkness of night, the driver spots a distant city aglow that flares larger with every rotation of the tires, breaking the blackness and overwhelming your senses. Michael C. Sharp revels in this moment. On his latest album, Synth Vehicles for Guitar, the experimental soundscaper sought to convey such a sensation, as he calls it, "That feeling of moving onto something."

A high-octane blend of thick synths, revved up guitar, and programmed motorik beats, the Holodeck-issued cassette siphons influence from ZZ Top's chrome boogie, Krautrock's rhythms, and the tension of film scores. "It's designed to sound cool while driving," offers the multi-instrumentalist known for his compositions with space drone contingent Sungod. Here he breaks down the tools of his trade.

"I've used that for everything since 2015," Sharp reveals of his go-to delay pedal, the TimeFactor. "It's got all kinds of cool band-pass delays and reversing. You can do two different speeds, you can do stereo, there's a lot of modulation – it kind of does everything." Conversely, the Akai Headrush he doubles it up with serves narrow application in his arsenal: "It's not a great pedal – the digital delay sounds like shit and the looper's real buggy – but one feature is awesome: a tap tempo tape delay that cascades. It's really washy so it sounds great for big drums or it can add a Seventies sound to a distorted solo."

"I can't help but use scales that make it sound like you're watching Cinemax at 1am – real depressive and moody shit," Sharp says of the patterns he plays on his trusty, workhorse Mexican Tele. Still, Synth Vehicles for Guitar thrives on dark-sunglasses axe-work he describes as "cool Eighties cocaine guitar," notably the ZZ Top homage "Eliminator." "Billy Gibbons can be moody and hazy too, 'I Need You Tonight' feels like a movie soundtrack."

"I like polysynths. My first instrument was piano, taking lessons in Catholic school, so I'm used to doing a lot," Sharp says of the classic Eighties analog unit, which, unlike a monosynth, can play multiple notes simultaneously. "It's got great decay and the bass on it is really good, so it takes up space in the mix and lets me fool around with everything else. The voicing is also great for leads."

Sharp began using the Minilogue while recording gorgeous New Age music his wife, flautist Kristine Reaume, as Remember Ecstatic Duo. The versatile Korg offering remained useful on Synth Vehicles for Guitar for its automated functions like the locked arpeggios that percolate through compositions. "It's a solid all-around synth with a sequencer that does it all, sounds pretty damn good, and is cheap," he attests.

It seems absurd that Sharp, an accomplished drummer (Uniform, Impalers, Hatred Surge), uses a beginner's drum machine, but the digital Boss model not only rendered the bass and beat groundwork of his latest album, its canned drumroll function came to be an epic-sounding hallmark of Synth Vehicles for Guitar, particularly the crescendoing "Motor Pt. 1 – Vibrations." "I thought it'd be cool if there was a big Dire Straits drum intro," he says of the da-dum-da-da-da-da-dum hits. "It sounds like something's flying by you while you're driving." 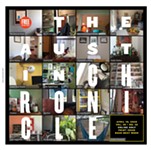 We Have an Issue: Habit Forming
Checking in with musicians in quarantine, #NowStreaminginAustin, Craft Brewers vs. COVID-19, and more new and recurring features 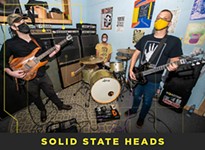 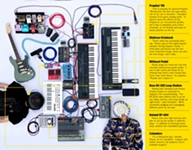 My Gear: Capyac
The Austin-born duo drops in Saturday at the Scoot Inn from their new digs in L.A. with a boatload of tech