Faster Than Sound: The Drama Behind the Cactus Cafe Negotiations 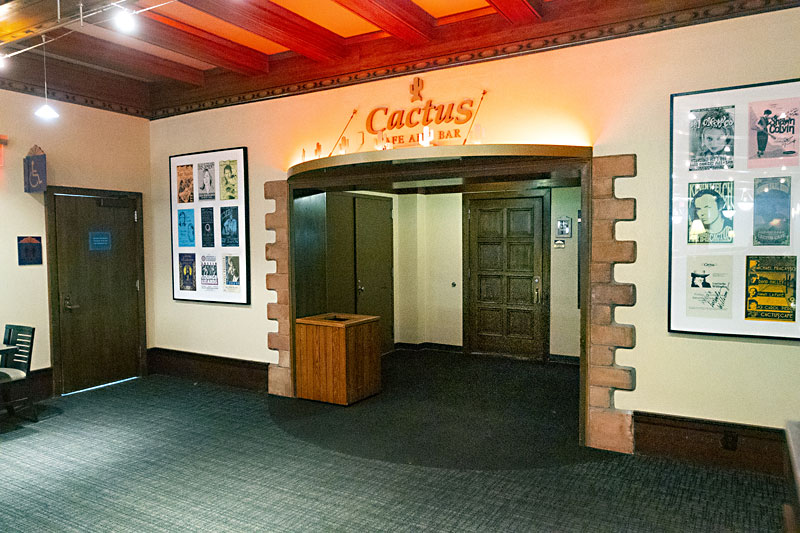 The entrance to the Cactus Cafe, which is currently being used for storage (Photo by Jana Birchum)

Last fall, KUT/KUTX's 10-year agreement with UT-Austin to manage on-campus music venue the Cactus Cafe expired. By May, sources confirmed to the Chronicle that the local radio station decided not to renew the arrangement. Details remained murky as Cactus management and KUT directed questions to University media relations, which say the school "remains committed to continuing musical programming at the Cactus for years to come while creating a sustainable path forward for its operations."

With the historic venue currently employed for storage, documents obtained by the Chronicle utilizing an open records request reveal emotions ran high behind the scenes of negotiations. Accusations of unprofessional behavior arising from both Cactus and university leadership, the intense web of communications involves tears, a human resources complaint, and the phrase "coordinated pressure campaign." The action centers on an April 23 meeting of the University Unions Board of Directors, which oversees the Cactus alongside student activities in the Texas Union building and other spaces.

Drama kicked off the day before, when longtime Cactus Manager Matt Muñoz sent an impassioned email to faculty members on the board, arguing for the cultural importance of the 42-year-old venue and detailing his own music industry experience. Muñoz took over in 2010 following manager Griff Luneburg, who established the Cactus as a musical destination and was employed by the university.

"When I took this job, I got called every derogatory name for a Mexican American, because I was not the guy who was running the Cactus previously," Muñoz wrote. "I was scared but I believed in the transformative power of this listening room. I'm so glad I stuck it out. We waded thru all the craziness from the 2010 press and community Save the Cactus Cafe campaign and we settled into a groove."

Referencing delays to negotiations, he added: "For the last 13 months, I have been waiting patiently for the [Unions] and KUTX to come to terms. It would be a shame for the University, the city and the nation to lose this great venue."

Board member Brian Roberts, a UT government professor present for Cactus discussions 10 years ago, forwarded the email to University Unions Executive Director Mulu Ferede. "And so it begins," wrote Roberts. "I find this sort of communication completely inappropriate."

Roberts also criticized Muñoz's letter in a separate email to multiple board members:

"I find this to be an irregular and inappropriate ex parte communication. I don't know if this is part of a coordinated pressure campaign, but I think the Cactus Cafe discussion planned for Friday's board meeting should be tabled until we have a much better understanding of this incident."

Despite concern, KUT discussed conditions for a new agreement at the next day's virtual meeting. In order to cover the station's annual subsidy of $120,000 to support the Cactus, KUT requested more booking opportunities at larger university spaces such as the Union Ballroom and Hogg Auditorium, plus revenue from bar concessions at shows, and a Unions investment of $50,000 over two years for Cactus improvements. If those efforts didn't raise revenues enough to break even, the broadcasters also requested the Unions cover additional costs (revisit "KUT/KUTX Will No Longer Manage the Cactus Cafe," Music, May 28).

On the Unions' side, Ferede estimated KUT's requests, including use of University rooms without rental fees, would produce an annual "negative impact" of $250,000 on the Unions budget. Ferede worried the station's priority booking outside the Cactus could interrupt student events like the Madrigal Dinner and Texas Review. "We do not want to deprive students of dates when it is their student fees that pay for the spaces," he said, according to meeting minutes.

This is where diplomacy breaks down.

Left out of the meeting minutes, but based on a human resources complaint filed by Muñoz against board member and business professor John Doggett, Muñoz jumped in to clarify that the Cactus team would "never book against student events."

Muñoz declined a request from the Chronicle to comment, but according to handwritten notes taken by a university HR consultant during an April 30 phone call with Muñoz, Doggett began "berating" him, yelling, "You do not get to interrupt our meeting! You are our guest!" Muñoz described the incident as "demeaning and demoralizing," adding that he wasn't aware of any guidelines for meeting conduct and that chat functions were disabled. The Cactus manager repeatedly said he felt like Doggett's outburst "biased the meeting," which included student board members alongside faculty.

The notes also indicate Muñoz "broke down crying after the meeting."

Decision not forthcoming, the topic was tabled with a unanimous vote, motioned by Roberts and seconded by Doggett. In a recent interview with the Chronicle, Doggett says he was unaware of an HR complaint filed against him. He denies yelling at Muñoz, saying he "just interrupted him."

"I made it very clear he was out of order," adds Doggett. "The director of KUT [Debbie Hiott] had spoken, and then [Muñoz] started speaking and I basically said, 'This is not your meeting. You're a guest.' His boss was very polite, and then he got hot and bothered because it was clear we weren't going to subsidize his baby.

"It would really be more interesting to talk about how rude he was, because he was very rude."

UT professor since 1989, Doggett joined the board in 2011, after the original KUT agreement. He says he has personally made donations to the local station, but disapproves of funding KUT management of the Cactus with the Unions budget, which is primarily made up of student fees.

"It would have been a violation of our board charter to take student money and use that to subsidize an external organization, and that's what KUT is," he says. "[KUT] has the ability to do something we don't: fundraise money from the general community."

Under the previous agreement, the Unions budget did cover some management costs like employment of bar manager Chris Lueck. In response to this, Doggett says, "Yeah, but that was before I was on the board, and I said, 'This is not justified.' I've been pushing very hard to make sure anything that is not supporting our student activities is out of the question."

When asked about potential booking of the Cactus by student group Campus Events + Entertainment, Doggett says, "That would make a hell of a lot of sense, and be a lot cheaper than hiring somebody full-time to book a place that's been losing money for a long time."

By the start of the fall semester, both Muñoz and Cactus Assistant Manager Amy Chambless will no longer be employed by the university. The next Unions board meeting will likely be held in September, where they could discuss the Cactus, but topics aren't set until the week of. Open-to-the-public concerts will still take place in other campus spaces like Bass Concert Hall and the McCullough Theatre, just not at the Cactus.

"We are committed to keeping the Cactus Cafe open as a music venue," says Doggett. "The question is just how to do this without burning a hole in the budget. We'll figure it out."