The Flatlanders Create a Defining Album During Their Pandemic Pause 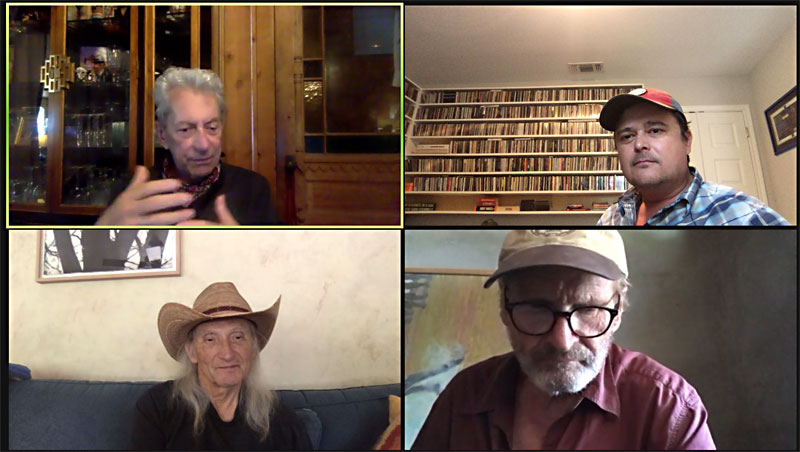 Butch Hancock is running a few minutes late on Zoom, but Joe Ely and Jimmie Dale Gilmore catch up onscreen, running through the speculative current whereabouts of various folks as lifelong friends do.

Wrangling the three songwriters together remains one of the Flatlanders' biggest challenges, even in a virtual setting. Yet the natural camaraderie and jokes flow easily when Hancock appears from his home in Terlingua. The Flatlanders remain a celestial event, three stars moving in their own orbits that happen to align at rare but spectacular intervals.

The Flatlanders remain a celestial event, three stars moving in their own orbits that happen to align at rare but spectacular intervals.

"We all stay in touch and are all always connected, but because of our schedules – we just have such different everything – getting together is a rare luxury," admits Gilmore. "It just so happens we had gotten together, even though it's been a year and a half ago now, because the three of us decided it was time to make a concerted effort to get together again for a couple of weeks and do a new project. Then the pandemic happened.

"So we were ripe for doing something, but then we couldn't."

Locked down alongside the rest of the world last summer, Ely began digging through the old Flatlanders files at his home studio in Dripping Springs. Among their recordings from the past decades, both in the studio and informal, Ely found cuts of familiar favorites the three had played together throughout their careers.

"During the pandemic, I had been looking through things from different eras," affirms Ely. "I didn't think about where it would go, but I thought it would be a good project while on shutdown. We didn't really know where it was going. Mainly it was just to keep our sanity.

"In that sense, it was a good time, because we had the time."

"We accidentally happened on this little treasure trove of stuff we had recorded," adds Gilmore. "They weren't for a specific project, but because we liked the songs back when we had some time in the studio and some really good musicians with us, Joe had the studio set up. So the fact that they were sitting there ready was just good luck, and Joe jumped on it."

The recordings struck a chord among the group for the joy and energy they capture in loose performances cut for fun. As Ely continued to excavate songs, what emerged was a history of the Flatlanders, the earliest influences that united the three Lubbock singer-songwriters since the early Seventies. Ever on point, Townes Van Zandt and Bob Dylan make the cull, but so do Leon Russell and Mickey Newbury, George Jones and Ernest Tubb, and several bluegrass standards.

"These songs are actually, some of 'em, what we would play just sitting around on the porch or the living room floor, because we didn't have any furniture particularly, and we'd just swap songs," offers Hancock.

Doesn't take much to appreciate the Flatlanders. Start with seminal 1990 reissue, More a Legend Than a Band, of the threesome's 1972 debut, or their last batch of new material, 2009's exceptional Hills and Valleys. Yet to understand the Flatlanders and the unique alchemy that melds the diverse range of Hancock's mystical panhandle poetry, Ely's roots-rock drive, and Gilmore's emotional hillbilly twang, there's no better document than Treasure of Love.

"Something happens when a song comes around that feels like the Flatlanders and that place we grew up in in West Texas around Lubbock," ponders Ely. "It just has this mysterious energy where you can tell a song belongs in your repertoire as your car blows off the road."

"All of these songs dig something out of our gut," concludes Hancock. "It's kind of what we're made out of. They all represent something to us that we've been carrying all through the years."