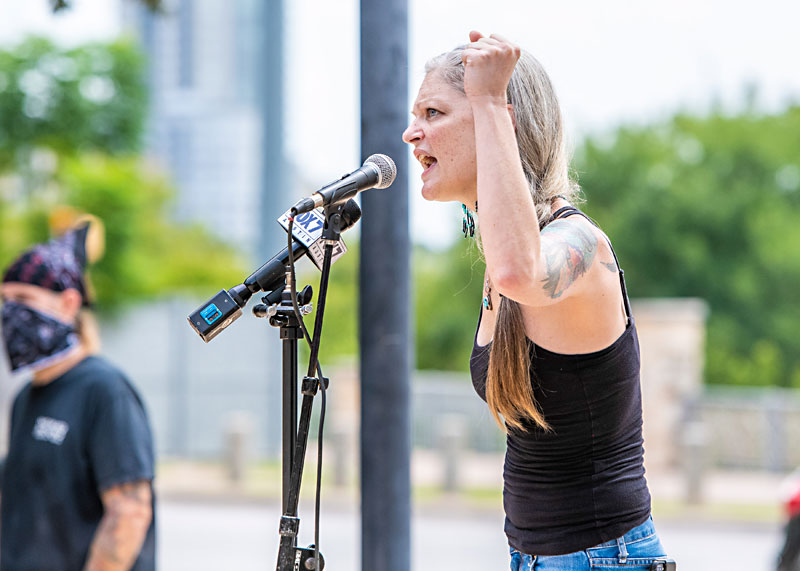 Amplified Sound Coalition founder Jeannette Gregor at the Sept. 16 "Come and Save It" Rally at City Hall (Photo by David Brendan Hall)

Last September, the night before a rally with Austin Texas Musicians demanding release of local SAVES (Save Austin's Vital Economic Sectors) resolution funding for music venues, Jeannette Gregor stayed up late launching a website for her new advocacy group. At the time, the furloughed Mohawk employee and festival production worker had been making ends meet by picking up shifts behind another bar. Uninsured, she worried about contracting COVID-19.

"In the last year, I've been more 'public speaker Jeannette,' but as a bartender, I'm a 30-second-conversation kind of person," admits Gregor. "Had I not been so scared and angry, there's no way I would have been able to speak in front of people."

Founded with former Barracuda booker Dan Holloway, the Amplified Sound Coalition focuses on those very issues of job security, health care, and well-being for all kinds of event people. The pandemic revealed a disastrous lack of economic stability for festival, venue, and production workers. Keeping up with industry discussion, Mohawk rolled out an ambitious press release in late April including efforts to "develop long-term relationships with its employees."

Staff restructuring included Gregor's new position as venue manager, six years after she took over a happy hour shift at the Downtown indie club. Alongside her familiar presence on Red River, the filmmaker/screenwriter also holds an MFA in dramatic writing from the Savannah College of Art and Design. A month into Mohawk's reopening, the Chronicle caught up with the bartender-turned-activist about her new gig, her "messy and fickle" industry, and getting back to live music.

Austin Chronicle: Mohawk announced there would be "increased wage minimums, salaried roles, access to health insurance" for employees. What has been put in place?

Jeannette Gregor: Our $15 minimum wage was immediate, down to bartenders. Most bartenders make $2.13 an hour on paper, which hasn't changed since 1991, and then make the rest on cumulative tips. We threw that out the window. [New Mohawk General Manager Mikey Wheeler] and I sat down and decided, "Okay, nightly, we're going to look at the numbers. If each bartender doesn't clear $15 an hour, then the venue compensates."

It puts more pressure on us, as a venue, to make sure that we have events people know about. There's no eternal happy hour, where you walk away with like $7. It's about showing your staff that their time is worth something.

AC: With Amplified Sound Coalition, you have advocated for event workers getting health care. What is that process like at Mohawk?

JG: Putting together a health insurance program for gig workers and bartenders for a venue like Mohawk is not an easy task. I didn't expect [the owners] would be able to pull that off immediately [for full-time employees], but they did. I've never had a job where I've had health insurance or a salaried position before. I just squeaked in there, right before turning 40.

I believe everyone should have access to health care – that's a no-brainer. But advocating with ASC, I'm acutely aware that our industry is difficult to wrap your head around. Government officials that are like, "What's your staff?" It's like, "We have this sound guy that came in two times last month, then they were full-time two months ago, but then they went on tour." Applying health care benefits to that – it's intense.

JG: Last we've heard, applications were transferred to a different governmental department. Right now, we're just operating as if that money is never going to come in. This was all proposed a year ago – they've had the time. I have empathy that our industry is hard to navigate, but this is disaster relief money. No one is acting like there's a disaster.

AC: What issue pushed you to launch ASC?

JG: When the SAVES resolution was proposed for venue funding. When I got pretty pissed off and loud towards City Hall, I wasn't operating out of altruism, I was operating out of fear. Because, to me, the worst possible scenario is that Mohawk's shut down. I was raised by an activist, so my mom taught us that if you're angry or upset, get loud in these particular channels. My brother [fellow festival worker Max Gregor of Ritual Events] works for the White House now.

Getting the SAVES money released [in early 2021] was inspiring on many levels, but then we got the winter storm. Thus has been the roller coaster of the last year and half, and now a mass shooting down [on Sixth Street]. What else could we possibly have thrown at us?

AC: How has reopening been?

JG: I haven't slept in a week, but it's amazing. We're selling out shows. The second night of Heartless Bastards got rained out, because of lightning. I got on the PA to say, "Sorry guys, we're going to reschedule." There was a "ohh noo" from the crowd. Then I said, "But, our bars will stay open until midnight if you want to hang out," and everyone started cheering. I was like, "I just canceled the show and people are thanking me? What is happening?" 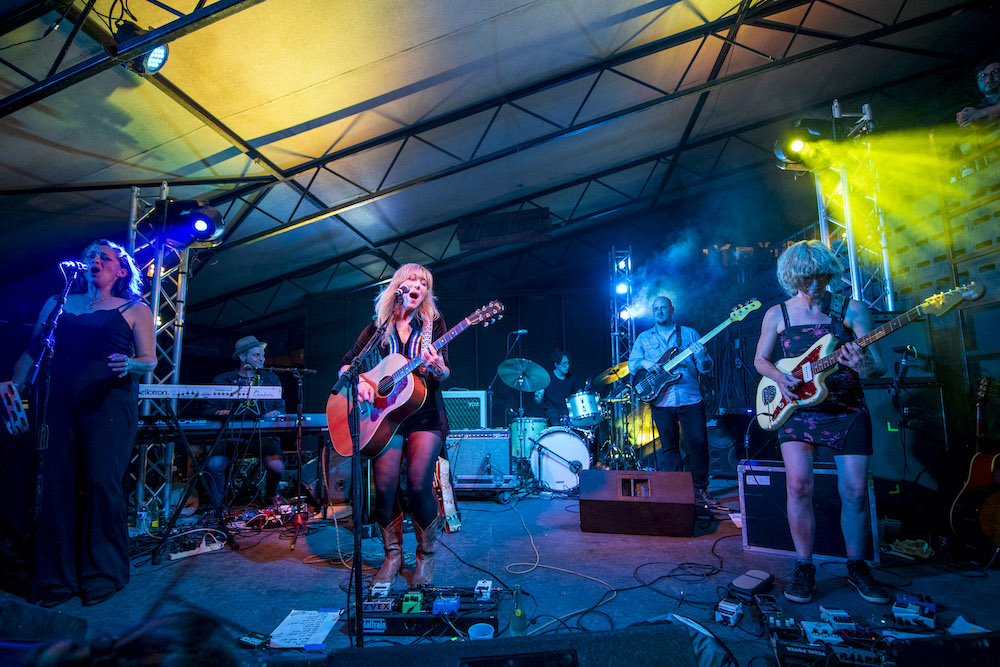 Heartless Bastards headline the reopening of Mohawk on May 27. (Photo by David Brendan Hall)

A potential pot of substantial music funding awaits city action. In late May, City Council directed City Manager Spencer Cronk to come up with $25 million of an incoming federal economic relief package – the American Rescue Plan Act – for Austin arts and music. On the music side, $10 million could help replenish existing programs like the hotel occupancy tax-supported Live Music Fund, diminished due to COVID-19 tourism drops.

At the latest Council meeting on June 10, a new draft of ARPA funding threatened to reduce the music allocation to $2.2 million – attracting attention from artists.

"The music community – women, LGBTQ [people], people of color – are in need of the synergy infusion of financial stimulation so we can get up on our feet," said musician Sonya Jevette, board member with Austin Texas Musicians. "[Reducing] $10 million down to $2.2 million, with a large portion of the funds being given to historic preservation and cultural arts, seems to skip over the Eastside entertainment community."

Responding to feedback, Council Member Leslie Pool proposed a revision to ensure delivery of the previously approved $10 million musical plan, which, the policymaker said, "We've promised to fund." She added: "This is a reassurance to them that by hook or by crook we're going to find the funds to get the Live Music Fund to the $10 million amount."

An additional resolution by CM Alison Alter also supported increasing the amount. She recommended the city manager look for resources beyond the ARPA to fulfill music advocates' requests: "It is going to be a very difficult budget, so I want to be clear to identify other sources – that may not be out of ARPA – to reach those goals."